NHS hospital worker, 60, is terrified to find sinister note saying ‘I expect not to see your car parked here again’ after she left it in public street to get to work

An NHS hospital worker was terrified to find a sinister note saying ‘I expect not to see your car parked here again’ after she left it in a public street to get to work.

Rebecca Melvin, 60, found the slip of paper on her windscreen on Madden Close after finishing a long shift at Nottingham City Hospital.

The receptionist claimed she had not done ‘anything wrong’ as the street was not private and she was not blocking anyone else’s car.

She claimed staff members have been forced to find parking spots outside the hospital because of restricted space.

Ms Melvin added that workers who live within 10 miles of the site cannot use the car park. 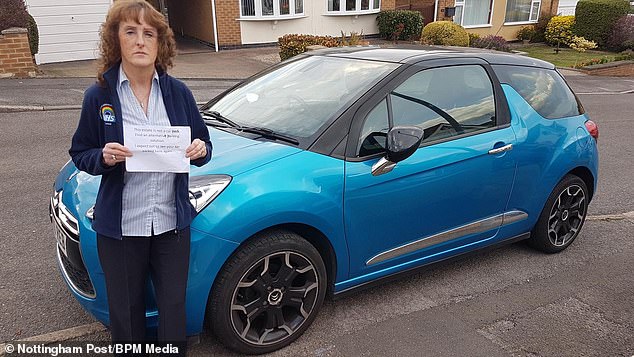 Rebecca Melvin (above), 60, found the note on her windscreen on Madden Close, after completing a long shift at Nottingham City Hospital

She claimed there is no viable bus route to take her to work and has for years tried to find nearby streets to park on.

Ms Melvin said: ‘The parking is an absolute nightmare. The rule is, I think it’s 10 miles, if you live within so many miles of the hospital then you can’t park there if you’re staff.

‘I live in Gedling, so only around three miles away, but there’s no bus near where I live to take me from my house up to that side of town where the hospital is. So I’m not allowed to park because there are so many people who live further out – they give them priority.

‘A lady that used to work in our place lived in a house [where I parked] and she said if you park up one of them side streets you can park up there and then just walk through a little alleyway and you’re about a 10 or 15 minute walk from the hospital. So I’ve been parking up there maybe for about a year.

‘I’m not in front of anybody’s house, I’m not on anyone’s driveway. It’s just literally at the side of the houses – on that road there must only be about four or five cars.

‘I’m not in anybody’s way whatsoever. One other lady from the hospital parked just behind me.

‘And when we both got there on Monday I’d had that note on my car and she’d had the same note on her car. 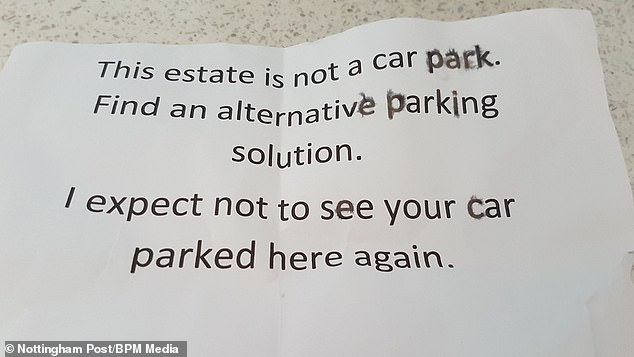 The receptionist claimed she had not done ‘anything wrong’ as the street was not private and she was not blocking anyone else’s car (Pictured: the note which Ms Melvin received)

‘It’s sinister. I’m frightened to leave my car there. To think that you’re providing an NHS service and doctors, nurses, lots of us that work at the hospital can’t park there.

‘And we’re all parking here there and everywhere and everybody – all the residents – keep making each area that you park in private parking – but what do you do? People expect the doctors to be there, the admin staff to be there, but how can you be there if you can’t park your car there? What upset me is that I thought ‘who are you to tell me that I can’t park, I’m not doing anything wrong’.

‘I’m parking on a little side street that nobody else is on to provide a service to people that are ill.’

Residents who live around Madden Close, where Ms Melvin had parked her car, were alarmed to hear the note was left on her car. One man called out ‘vigilantes’ who take action in their own hands.

Salam Khoury, 68, who lives nearby and works as a biotechnologist, said: ‘I don’t drive myself so I’ve not had any problems or heard any complaints about people parking – there aren’t that many cars though so I don’t see why people would be mad. I don’t know why people are inclined to act as if they are vigilantes.

‘A lot of people seem to want to take action into their own hands, especially these days. When I was younger we didn’t even have the word activist.

‘There are ways to educate people. Now, there are right ways to do it and wrong ways to do it. Some people will do it with conversations but others will put threatening notes on people’s cars.

‘Some people will do it by any means necessary. I don’t think that this is the way to go about it.’

Jen Pimbleton, 53, said: ‘That is alarming! We’ve got a few people around here who work at the City Hospital. I can’t say I saw anything like that at all.

‘This is a nice neighbourhood and that’s quite extreme. I wouldn’t say that there are issues with too many people parking on our streets.

‘But people do get touchy about that sort of thing and I wouldn’t be overly surprised if someone did it. It doesn’t bother me where people want to park and I think it’s dead wrong that anyone would react that way.

‘That’s not the way people should behave really.’