More than 80 per cent of nightclub owners plan to ignore Government pleas to use Covid passports for admissions, it was revealed today.

The finding from a poll of more than 250 businesses will put them on a collision path with Boris Johnson’s administration.

It has asked firms to voluntarily use the NHS App system when they reopen on Monday but have threatened to force them on firms if they refuse.

But 82.7 per cent of those polled by the Night Time Industry Association (NTIA) said that they would not throttle admissions.

Among the reasons given were the cost, the risk of confrontations with disgruntled punters and the fact that the proportion of 18-30s who have been double jabbed is the lowest of all age groups so far.

Michael Kill, the NTIA chief executive said: ‘The Government should recognise explicitly that Covid passports are just not viable for large swathes of the night time economy, as their own internal report into the matter concluded. 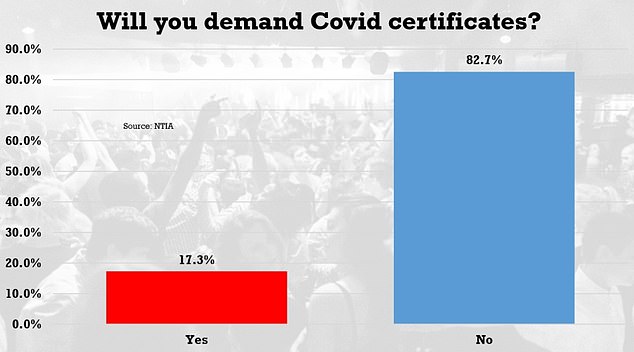 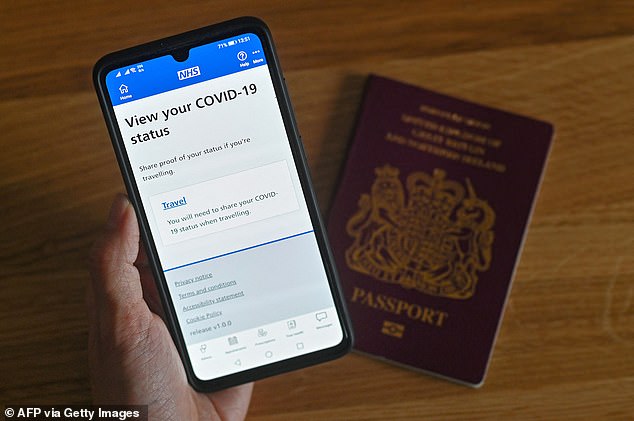 The finding from a poll of more than 250 businesses will put them on a collision path with Boris Johnson’s administration.

‘My worry here is that they intend to hide behind this guidance and blame individual businesses and consumers for not taking the steps to stay safe.

‘In fact, this sector takes the safety of its staff and customers very seriously and wants to be able to reopen safely, but is once again at sea because of a lack of leadership from the Government.’

This week venues hosting mass attendance events were urged to voluntarily use the domestic Covid certificates after July 19 to keep infection rates down.

But guidance released online suggested that those who don’t act voluntarily may face their mandatory imposition if they are linked to outbreaks.

It prompted a furious backlash from venues who said it would damage businesses trying to recover from months in mothballs.

An industry source suggested the Government threat was motivated by a desire to boost teenage vaccination rates before the start of the new university year in the autumn.

It came as a senior government science adviser voiced concern over falling update in young people.

Professor Anthony Harnden, deputy chairman of the Joint Committee on Vaccination and Immunisation (JCVI), told Times Radio it is ‘concerned’ about the uptake of first doses among younger age groups.