Pennsylvania man who portrayed Santa for decades dies of COVID-19 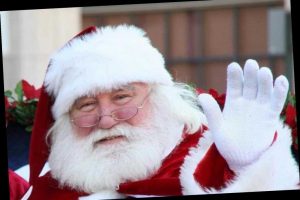 Moderna COVID-19 vaccine may offer up to two years of protection, CEO says

A Pennsylvania man who instilled a sense of wonder into generations of children while portraying Santa has died of the coronavirus, his wife said.

Lewis “Lew” Williamson, 76, succumbed to the virus Monday after getting sick in early December — despite precautions he took to avoid getting infected, his wife told the Times-Tribune.

“He was petrified to get sick,” Maureen Williamson told the newspaper, adding that her husband took the threat seriously and had planned Zoom meetings as St. Nick this season.

But Williamson, who spent 30 years as Santa for countless children in northeast Pennsylvania, was admitted to a hospital on Dec. 4 and was diagnosed with COVID-19. He was later put on a ventilator in an ICU unit, where visitation was limited, the newspaper reported.

“It was a hard month,” Maureen Williamson said.

Williamson got emotional as she recalled one boy who sat on her husband’s lap at a Scott Township store in 2019 and asked for his father back.

“Me and God have an understanding,” Lewis Williamson replied, his wife said. “I take care of toys and he takes care of angels.”

Williamson spent 30 years meticulously honing his image, starting the transformation for the ensuing Christmas season on June 1. He would later enlist his three sons to help shave off his impressive white beard each Christmas Eve, the newspaper reported.

Williamson got his start in the 1990s at a mall in Scranton after answering an ad calling for a Santa with an authentic beard. He would go on to appear in the Scranton Santa Parade every year since 1993, according to the report.

Maureen Williamson said she’s comforted by knowing that her late husband made the Christmas season magical – and perhaps believable – for so many youngsters.

“People are sending me stories that I didn’t know, and for me, it’s a little bit of peace and happiness that this is the man he was, and this is who everybody knew,” she told WNEP.

“He’s made a legacy for his children and his grandchildren. I think he will never be forgotten by all these people, and that gives me peace.”