Police will patrol "populous places" in Melbourne including parks and check the addresses of people gathered outdoors as they warned they would not hesitate to issue fines of up to $5000 to those breaching coronavirus restrictions.

From Monday, Melburnians are allowed to gather outside in groups of five from two households. At the same time the state government has tripled the penalty for unlawful indoor and outdoor gatherings to $4957 for individuals. 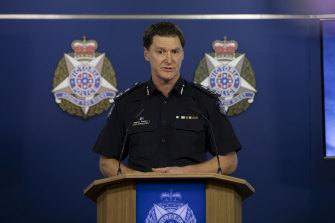 Chief Commissioner Shane Patton said on Monday that police would "very rarely" use discretion when issuing the hefty fine as they vowed to crack down on a spate of illegal parties across Victoria.

“The use of discretion will be used only in most extreme circumstances and very rarely applied,” he said.

“This is a significant penalty, that is clearly obvious. We will be issuing fines to anyone who breaches those public or private gatherings, it is as simple as that."

Some civil liberties groups have raised concerns about the increased fine, describing it as a disproportionate response.

Mr Patton said that if police suspected any breaches of the restrictions – such as people from more than two households gathering for a picnic – officers would ask people to provide proof of their address.

"We will be out and about all this week but importantly on the weekend when we are looking at finer weather," he said, with temperatures in the mid- to high-20s expected on Friday and Saturday.

"We will be doing what we always do. We will be asking people – if we think there is a potential breach – in a polite and dignified and decent manner, asking people where they are from and validating their addresses if need be."

"It requires a common sense approach from us, that's the approach we will take.

"Most of the time these people sitting together picnicking or doing whatever activity it is they are doing, they will provide a valid reason and we will move on and say thank you."

The move comes as police busted at least 10 illegal parties on the weekend, including a group of adults on the Victorian Surf Coast who hired a jumping castle.

Police issued 93 infringements at the gatherings, including 15 at one party in Hoppers Crossing, where they found 40 people gathered.

When police arrived, some people jumped fences and ran away, while others hid in the home to try and avoid detection.

"This weekend for some reason – maybe the fatigue is starting to get to people – this weekend was an especially bad one where we've seen a whole host of different parties pop up,” Mr Patton said.

“The ignorance and selfishness of placing others at risk … it’s unfathomable.It defies logic and common sense. It's incredibly frustrating."

The new fine of almost $5000 was supported by police as it "really will be an effective deterrent", Mr Patton said.

"When you put the number five with three zeros next to it, it's such a significant hit to the pocket that people will say it's just not worth the risk. It's as simple as that."

However, some civil liberties groups expressed concerns on Monday about the increased fine, arguing it was excessive.

"Victoria has gone down the pathway of focusing on law enforcement and punishment as a way to address a public health emergency," said Daniel Nguyen, advocacy co-ordinator for the Flemington Kensington Community Legal Centre's Police Accountability Project.

"Even looking at the original fine, the $1652 amount was the highest seen anywhere around the world to start with, and they tripled that to $5000," he said.

"We are significantly concerned about the fact that anecdotally, and in the very limited statistics released, fines are disproportionately issued to communities with culturally diverse backgrounds, people with mental health issues and Indigenous populations. That concern would be continuing with these increases.

"We are in a health pandemic, let's look at actual ways we can address it from a health perspective and assuring it is proportionate. We can't see how a $5000 fine, things like the curfew, increased police patrols, have had any benefit for this state so far."

Youthlaw's advocacy and human rights officer Tiffany Overall said they had concerns the fine could increase the financial and emotional stress for young people dealing with unemployment, a lack of family support, homelessness or mental health issues.

"We have been very concerned about the $1652 fine, so $5000 is just beyond the means of most of the young people we work with and support," she said.

"Given we know that under 25s are almost half of the people getting fined, we would actually be encouraging police wherever possible to use discretion or caution young people.

"We are not saying young people shouldn't adhere to restrictions, we are encouraging a health-first response rather than a punitive response that doesn't take some of these circumstances into account."

On Monday, Premier Daniel Andrews said authorities wouldn't fine someone who tests positive to coronavirus, even if they had been to an illegal gathering, as they needed to ensure people were truthful during the tracing process.

"Their positive diagnoses and their story about who they have been in contact with is worth infinitely more than $5000," he said.

"I know that seems counterintuitive … the most valuable commodity at the moment is anyone with any symptoms coming forward, getting tested."