Awkward! Pranksters embarrass couple on first date by sending a bottle of bubbly with a fizzing sparkler to their table – making it look like they’re celebrating their engagement

A couple were left mortified on their first date after their prankster friends sent a bottle of prosecco along with a sparkler to their restaurant table so it looked like the pair were celebrating their engagement.

Neil Harkin, 31, from Derry, Northern Ireland, and Jean McAuley, 31, were left squirming in embarrassment as a waiter brought over the fizzing indoor sparkler and other diners clapped at The Old Docks Bar and Grill in Londonderry.

The extravagant delivery was orchestrated by Mr Harkin’s friend and restaurant owner Liam Shiels, 35, who decided to prank his friend by sitting the couple in the middle of the room, before joining 13 other friends to watch as the stunt unfolded.

During the footage, the unsuspecting couple, look around in surprise as the bottle of prosecco is brought out for them to the song Congratulations by Cliff Richard. 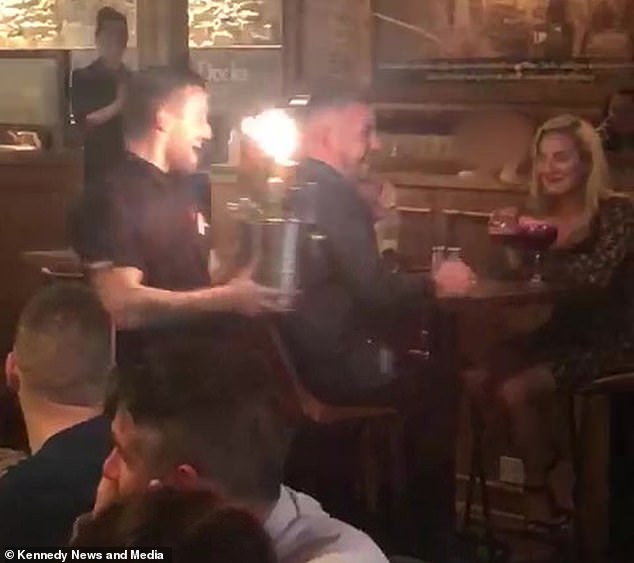 Neil Harkin, 31, from Derry, Northern Ireland, and his date Jean McAuley, 31, look around in shock as the bottle of prosecco is brought to their table with a sparkler 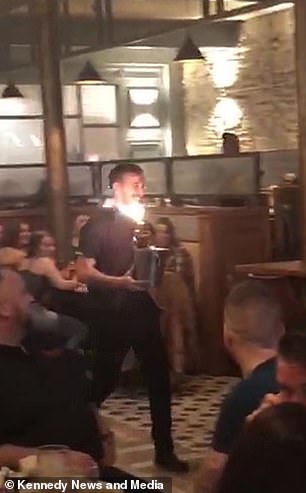 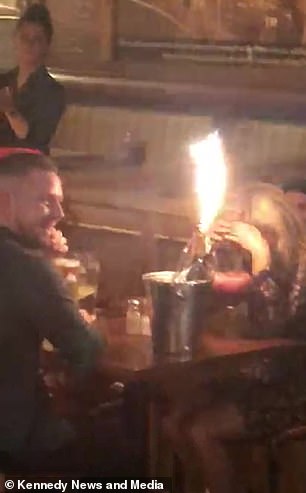 Diners in the restaurant begin to cheer and clap for the couple as the pair laugh with embarrassment.

Mr Harkin, who works as a bartender, said: ‘There was nothing I could do. I just wanted the ground to open up and swallow me.

‘Nothing seemed out of the ordinary. We didn’t expect anything at all.

‘The restaurant was packed – there wasn’t a [free] seat in the whole restaurant.

‘Being a friend, Liam knew it was a first date so that’s when he started his prank. As they say, the rest is history.

‘A customer had a birthday so I thought they were going to do something [to say] happy birthday. We were sitting there having a meal and then the next thing a bottle of Prosecco came down with a sparkler on it.’

Following his successfully executed prank, Mr Sheils, who is also from Londonderry, said: ‘It was priceless – unbelievable. The whole place was clapping and cheering.

‘He text me on the Friday to book a table in the restaurant so I said ”I’ll get you squeezed in”. We were there for a leaving do too.

‘When they walked in he was expecting everyone to be cheering but we just said ”alright, how are you doing?” 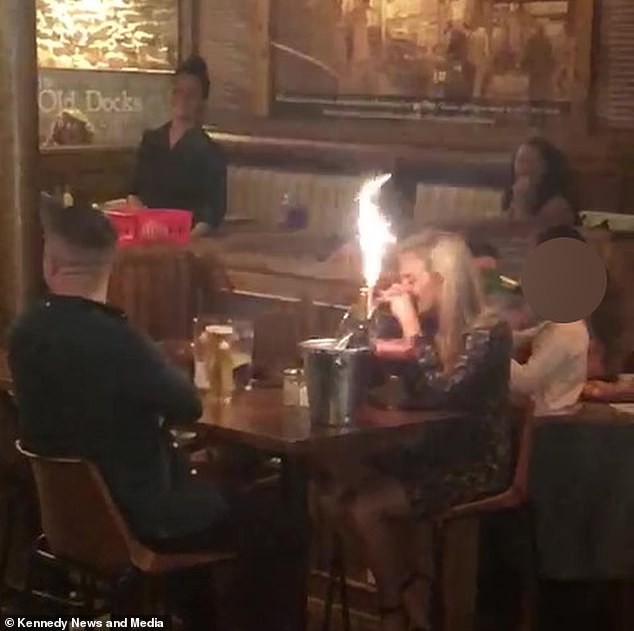 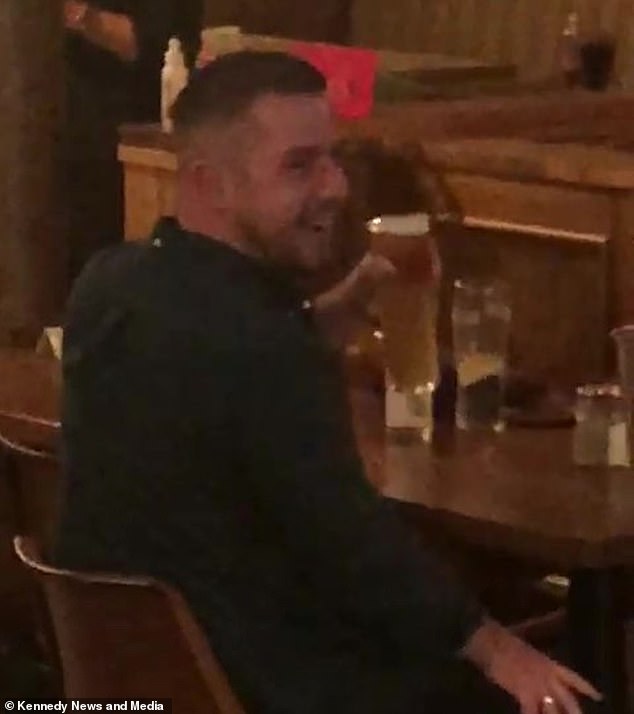 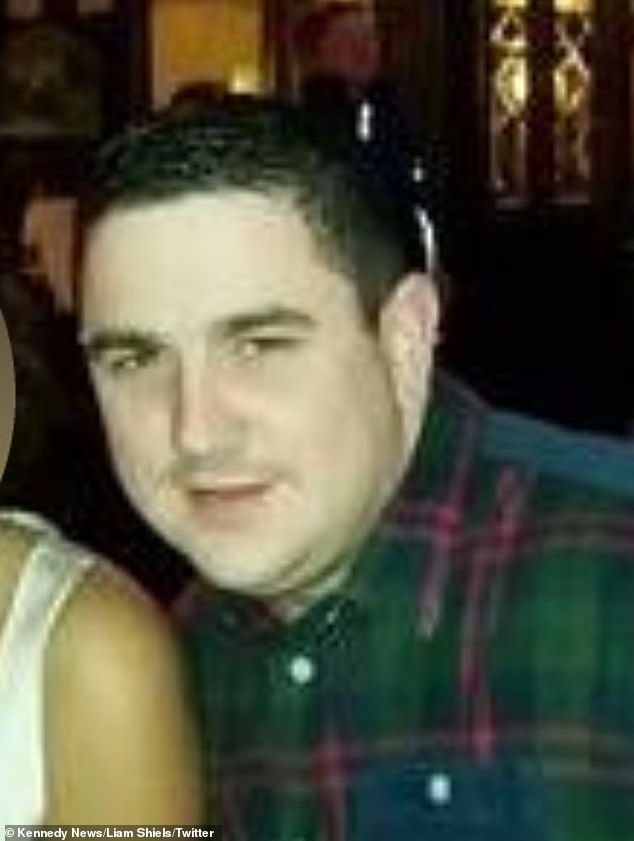 The extravagant delivery was orchestrated by Mr Harkin’s friend and restaurant owner of The Old Docks Bar and Grill Liam Shiels (pictured), 35 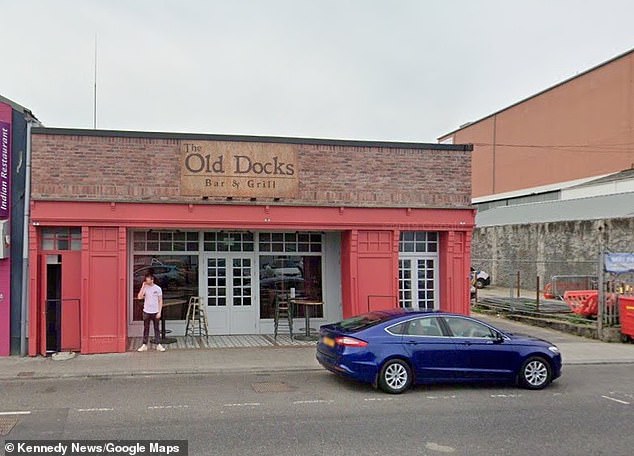 ‘We had it arranged that we’d put them in the middle table in the whole restaurant.

‘When they were just finishing dinner we got the staff to get a bottle of Prosecco with a sparkler on the top of it, then played ”Congratulations” music around the speakers.

‘We couldn’t stop laughing. You can hear the laughs in the background.

‘There were 14 of us out and there was a few people videoing it.’

Mr Harkin, who has known his date since primary school, had no idea of how his night would unfold, instead presuming the music was for someone having a birthday.

He said: ‘This was a first date, but me and Jean went to the same primary school. I’ve known her a long time then we hooked up and went on a date.

‘The fella who walked out with the bottle used to play football with me – Gary, he’s the waiter. He was in on the prank as well.

‘We have a second date lined up now – but the first place I won’t be going to as the Old Docks.’

The prank, which has since been viewed more than 60,000 times online, has been met with an array of comments on social media

Despite being mortified by the prank, the couple then joined Mr Harkin’s prankster friends for a drink after their date – and Ms McAuley even agreed to see him again.

Mr Shiels said: ‘The two of them took it so, so well. The craic was great. The girl he was out with grabbed a glass and poured herself a drink.

‘It ended well because they joined us for a drink later on that night.’

The prank has since been viewed more than 60,000 times on social media, with some hailing the prank ‘a first date to remember’.

One person wrote: ‘That’s a first date to remember.’

While another person added: ‘OMG Jean you’ll not forget this first date. Can’t wait to hear all about it.’

Meanwhile another social media user commented: ‘This is brilliant, poor girl is mortified lol (sic) but she’ll not forget that date.’