Madrid: Spain reported 2935 new coronavirus infections on Thursday, the highest number since the country's lockdown ended and up from 1690 recorded the previous day, although officials argued the situation remained manageable.

The Madrid region, which failed to report its data the previous day due to technical difficulties, led the tally with 842 new infections in the 24 hours to Thursday, followed by the Basque Country, with 545 cases. 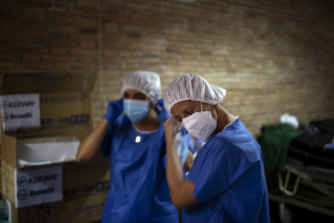 Medical workers prepare to test people for COVID-19 in Barcelona.Credit:AP

"The number of known cases keeps rising in Spain, but it is a mild rise that allows the implementation of control measures," health emergency co-ordinator Fernando Simon said, adding that the localised outbreaks did not amount to a second wave of infections that many expect in the autumn.

He said more than half of the infected people showed no symptoms.

The new data brought the cumulative total to 337,334 cases in the country. The ministry also said 70 people had died over the past seven days, bringing the death toll from the virus to 28,605.

Since lifting one of Europe's strictest lockdowns around seven weeks ago, Spain has struggled to keep a lid on new infections, with average daily cases rising from less than 150 in June to more than 1500 in the first 12 days of August, and now spiking further.

The resurgence of the virus has dashed Spain's hopes of saving the tourism season as many countries have issued no-travel advisories or introduced quarantine requirements for travellers from Spain.

Various Spanish regions have reimposed some restrictions and even come up with new ones, such as a ban on smoking in public spaces in Galicia and the Canary Islands.

UK will be 'ruthless' as infections in France spike

British Prime Minister Boris Johnson said his government was prepared to be ruthless with even its closest partners over COVID-19 quarantine rules, after he was asked whether France would be removed from the government's safe-travel list.

Britain has in recent weeks imposed a 14-day quarantine period for arrivals from countries like Spain and Belgium, responding to rising infections and fears of a second wave of the virus, having initially declared them safe for travel. 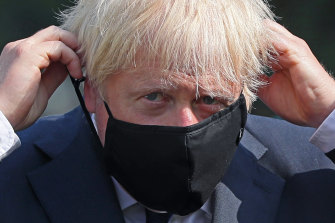 The French health ministry reported 2669 new coronavirus infections over the past 24 hours on Thursday, setting a new post-lockdown daily high for the second day in a row and taking the country's cumulative total of cases to 209,365.

The seven-day moving average of new infections, which averages out weekly data reporting irregularities, increased to 1962, a total that has doubled over the last two weeks and is at levels not seen since the end of April.

"We've got to be absolutely ruthless about this, even with our closest and dearest friends and partners around the world," Johnson said on a visit to Northern Ireland.

"We will be looking at the data a bit later on this afternoon … looking at exactly where France and other countries are getting to, and you know we can't be remotely complacent about our own situation."

That has prompted speculation it could be the next European country added to Britain's list – a move that would affect the large number of British tourists travelling there during English school holidays.

WHO downplays danger of virus latching on to food packaging

The World Health Organisation on Thursday downplayed the danger of the coronavirus latching on to food packaging and urged people not to be afraid of the virus entering the food chain.

Two cities in China said they had found traces of the coronavirus in imported frozen food and on food packaging, raising fears that contaminated food shipments might cause new outbreaks.

"People should not fear food, or food packaging or processing or delivery of food," WHO head of emergencies program Mike Ryan told a briefing in Geneva. "There is no evidence that food or the food chain is participating in transmission of this virus. And people should feel comfortable and safe."

WHO epidemiologist Maria Van Kerkhove said China had tested hundreds of thousands of packages and "found very, very few, less than 10" proving positive for the virus.

More than 20.69 million people have been reported to be infected by the novel coronavirus globally and almost 750,000​ have died, according to a Reuters tally.

The WHO urged countries now that are striking bilateral deals for vaccines not to abandon multilateral efforts, since vaccinating pockets will still leave the world vulnerable.