A teenager who stabbed a young woman in a Melbourne park had a police officer call his mobile phone later that day because he thought he had lost his phone and couldn’t recall the attack, a court has heard.

Dimitri Evangelou followed the woman and stabbed her three times in the back with his pocket knife on a walking track in a park in Gowanbrae, near Melbourne Airport, about 10.15am on September 3 last year. 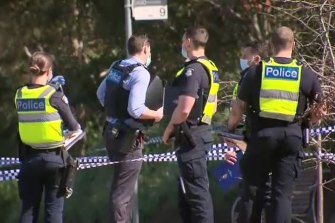 Police at the scene of the stabbing in Gowanbrae last year.Credit:Nine News

The woman, then aged 21, also suffered a stab wound to a finger on her left hand while defending herself and doctors later feared they would have to amputate the digit, the County Court heard on Wednesday.

Prosecutor Andrew Sprague said passers-by came to the woman’s aid when she screamed and Evangelou ran.

Evangelou couldn’t recall attacking the woman, Mr Sprague said, but dropped his mobile phone at the scene and around lunchtime that day asked police and staff at an Airport West shopping centre to ring his number in the suspicion he lost the phone while shopping.

Evangelou later accepted that he attacked the woman because of the forensic evidence and CCTV footage tying him to the park. Police also found his pocket knife under his bed. 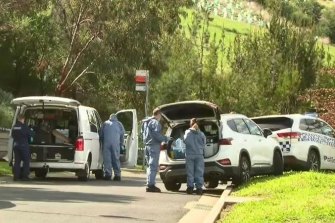 Police investigators after the woman was stabbed in a Gowanbrae park last year.Credit:Nine News

The woman has scars on her back from the wounds and constant numbness in the tip of her finger, and the surgery for her wounds meant she had trouble dressing herself, showering, sleeping and cooking in the weeks afterwards.

She recalled in a victim statement having panic attacks in public afterwards, fearing men who wore masks, isolating herself from others and being unable to walk anywhere by herself or have anyone behind her.

“I couldn’t walk on my own until a month after the incident, which did impact my life as it was something that I liked to do,” she said.

“The incident has caused a fear in me that I never used to have. I was very trusting.”

Defence lawyer Jessica Willard acknowledged the traumatic nature of the attack but said it was highly likely Evangelou had mental health problems “at play”. He heard voices in his head when he first went into custody.

Judge Douglas Trapnell described the case as “completely bizarre”, given the daylight attack was unprovoked and Evangelou had no memory of it.

The judge ordered Evangelou undergo a psychiatric assessment before his case returns to court in November.

The teenager was on a video link from custody but kept his head forward on a table for much of the hearing.