Does YOUR face mask keep you safe? Popular masks hide ‘alarming flaws’ with the worst trapping only a third of bacterial particles, tests show

Some of the most popular face masks on the market have ‘alarming flaws’, test shows, with the worst only trapping a third of bacterial particles.

Consumer group Which? tested a range of popular brands and styles of face coverings and masks for how well they filtered particles, how breathable they were, and how they fared after multiple washes.

The watchdog found that the best performing face covering was able to block more than 99% of potentially harmful bacterial particles, filtering just as well as a disposable mask, but the worst product only stopped a third of the particles passing through.

Some of the face coverings with high filtration claims on the packet did not live up to them in Which? testing, and seven of the 12 had poor packaging instructions that failed to provide key information for maximising effectiveness and protecting the wearer.

The Adidas face covering (£17 for a pack of three), sold at retailers including Asos, Next and Sports Direct, only filtered a third of particles in Which?’s tests, while the Vita Shield face covering (£9.99 for three) dropped from 60% filtration on first use to 38% after five washes.

Adidas told Which? its mask was designed early on in the pandemic, before there were defined performance criteria for non-medical face coverings, and that its mask was tested for comfort and breathability. 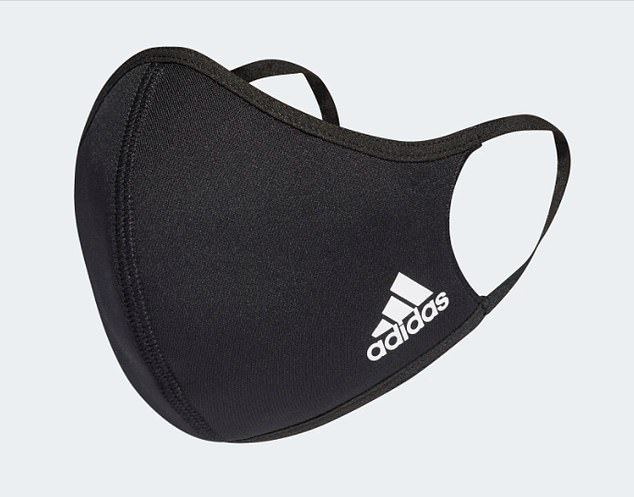 The Adidas face covering (£17 for a pack of three), sold at retailers including Asos, Next and Sports Direct, only filtered a third of particles 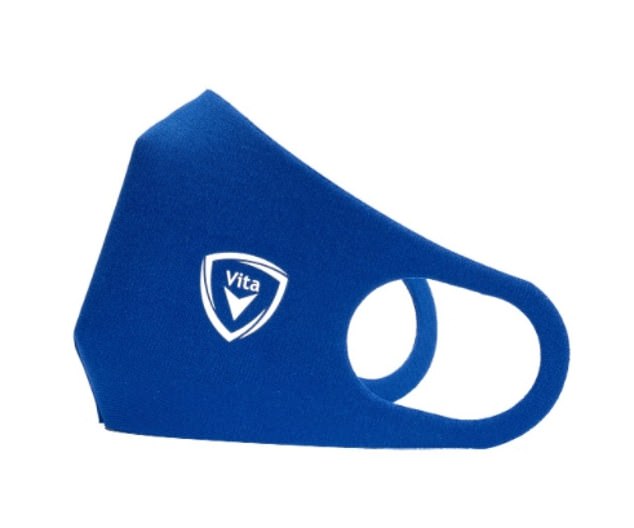 The Vita Shield face covering (£9.99 for three) dropped from 60% filtration on first use to 38% after five washes 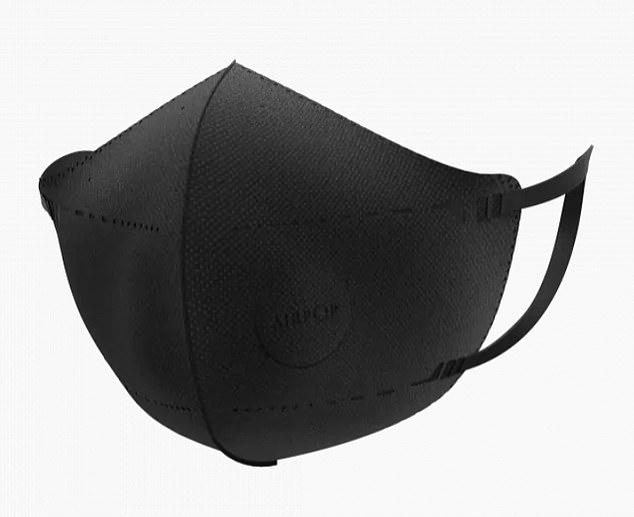 The highest-scoring face covering tested was the Airpop Pocket (£24.99 for four), available direct from Airpop or on Amazon

The Vita Group said its face covering had been tested at external accredited testing facilities, which showed filtration levels of more than 90%. It said that the discrepancies in results demonstrated the need for mandatory, overarching standards to be put in place.

The highest-scoring face covering tested was the Airpop Pocket (£24.99 for four), available direct from Airpop or on Amazon. The covering is made from similar materials to disposable masks and does a superb job of filtration – though it is ‘semi-reusable’, so can only be washed and reused a set number of times before it needs to be thrown away.

Other high performers were masks from Superdrug (£4.99 for three), The Big Silk (£16.90 for one) and Marks & Spencer (£9.50 for five), which scored well for filtration, breathability and comfort.

Some reusable face masks now display filtration levels on the packet, but four of those did not achieve the stated levels when tested by Which?

The Wise Protec (£10 for one), sold at John Lewis, Matalan and Home Bargains, and Alvita (£7 for two) mask, sold at Boots, both claim more than 90% filtration efficiency, but Which? tests showed lower levels, at 80% and 82% respectively. After washing, this dropped to the high 60s for both.

Boots’ Adult Reusable Face Mask (£10 for two) claims more than 95% filtration, which was borne out in initial tests, but after five washes this dropped to 75%.

Wise Protec and Alvita told Which? that their above-90% filtration levels had been verified in independent, accredited labs. Boots also said its mask had been ‘rigorously tested’.

Seven of the 12 products Which? tested also had poor usage and washing instructions on the packaging, both of which are key for maximising effectiveness, as poor mask hygiene could increase your risk of infection.

Which? looked for basic information on the packet, like detailed cleaning instructions including washing method, frequency and temperature. Researchers also expected to see clear warnings about how to correctly wear the mask, and confirmation that it was not a medical device. 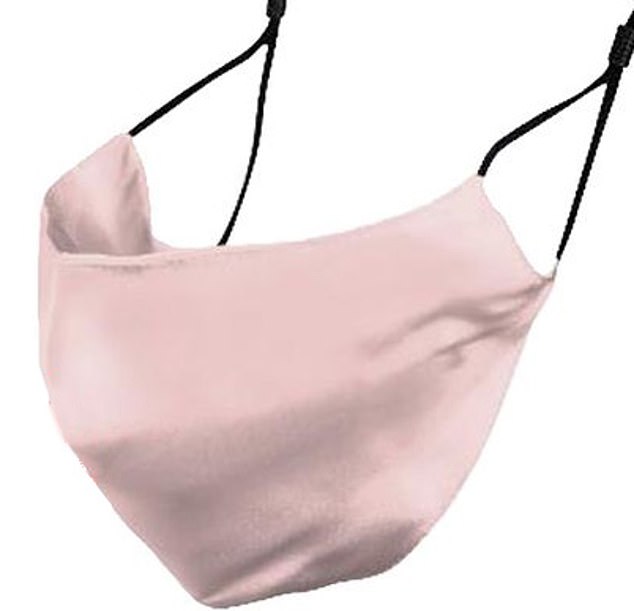 The Big Silk (£16.90 for one) was one of the high performers in Which?’s face covering tests 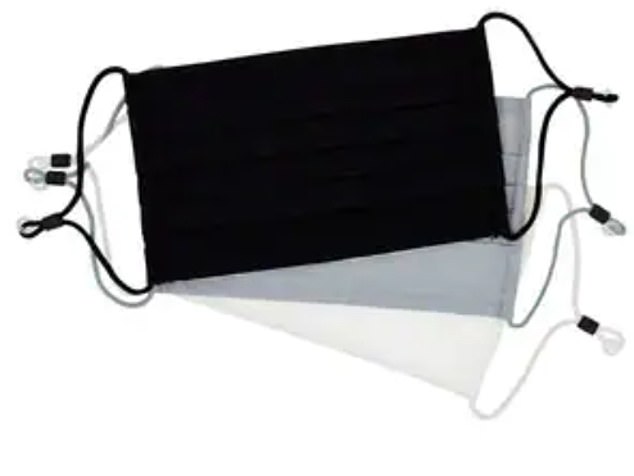 Masks from Superdrug (£4.99 for three) scored well in the consumer watchdog’s tests 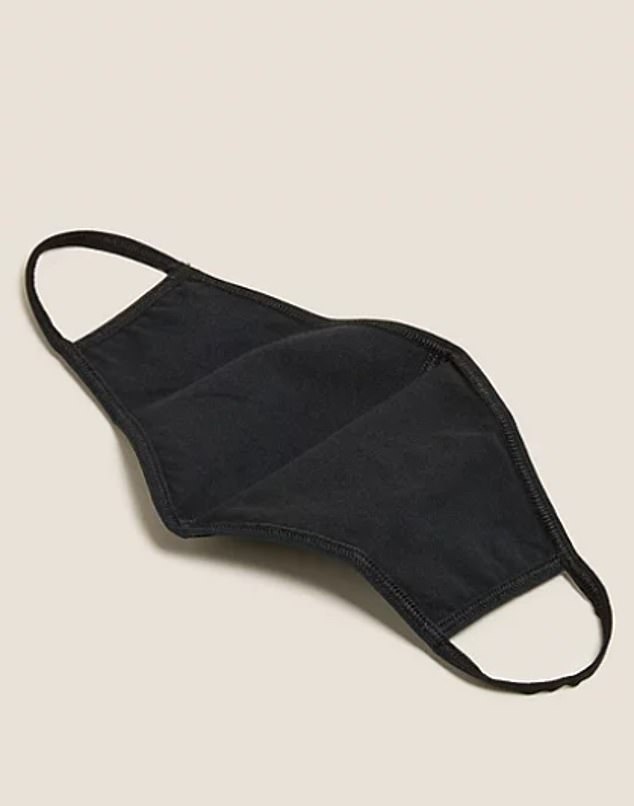 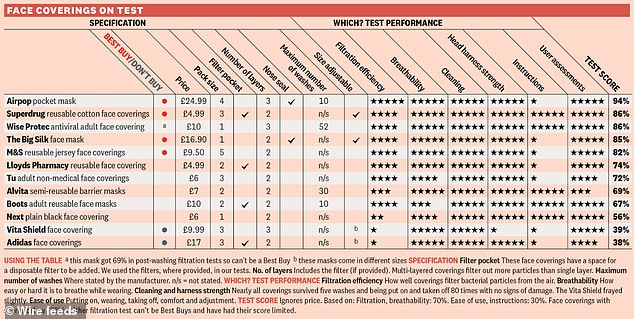 Which? Magazine editor Harry Rose said: ‘Our tests show there is still work to be done to improve the quality of face coverings. While the best reusable face coverings can be just as effective as a disposable mask, there are still too many that fall short of the mark.

‘We would like to see more manufacturers committing to minimum performance standards for filtration and ensuring basic safety instructions are present, but for now it is worth taking time to research the best option for yourself and your loved ones before buying.’

A spokesman for Vita Group said: ‘The Vita Group stands behind the test results rigorously generated over the last 12 months by Centexbel, a world-renowned independent accredited test centre. Their results bear no relation to the results obtained by Which?, which supports our view that mandatory standards need to be outlined by legislation for all face coverings.

How some of the most popular masks on the market scored in tests by consumer group Which?

This hybrid ‘semi-reusable’ mask is made from three layers of spunbound, non-woven polyester and nylon, similar to disposable masks. It has a foam nose bridge and a collapsible design. It’s superb at filtering particles – 99.9% before washing, and 94% after five washes. And it’s still light and easy to breathe in.

Airpop says it can be worn for 40 hours and up to 10 washes before you need to retire it, so it is a more costly option than a fully reusable mask, but it’s a great choice for higher-risk scenarios such as crowded places or public transport.

Pack instructions are minimal, although the Airpop website has comprehensive use and washing information. You can also buy a small case to carry the mask in (£10). The Airpop Pocket comes in white and black, and there is an Airpop kids’ mask which is similar but smaller, and comes in white, blue and pink. They’re available at Airpop and Amazon.

Are they recyclable? We checked with Wilko – which has launched a trial drop-off scheme for recycling disposable masks in some stores – and it told us the Airpop masks could be recycled via this scheme.

These deceptively simple budget-friendly masks really impressed in our tests. They’re 100% cotton, very breathable and our testers gave them glowing reviews for comfort while wearing. They have a filter pocket, so you can insert a disposable filter to increase filtration further.

This is something you may wish to do once you’ve washed and used them a few times – after five washes, we found the filtration efficiency dropped from an impressive 85% to a more average 72%. But with three in the pack, they are a cost-effective and reliable option.

You can choose from the more understated white, grey and black, or opt for a pack containing pink, aqua and white masks. They’re available at Superdrug.

Silk masks are pricey but have a dedicated following, helped by their presence on many a celebrity face. Our first silk mask on test shows they aren’t just a pretty covering though – this Big Silk mask scored well enough to be a Best Buy. Its filtration abilities are good, if a little lower than some of our other top picks, although it improved after washing (73% before, 79% after).

There are advantages to silk – it’s meant to be gentler on your skin as it’s less occlusive than other fabrics, and it’s hydrophobic so it repels water droplets. Plus, this is our most breathable Best Buy. It’s got a little more pizzaz than your average mask, handy for smarter occasions. Our testers found it pleasant to wear, and it’s adjustable with ear loops and a nose wire. It also comes in a range of muted colours including black, grey, green, pink and cream.

Bear in mind that the brand suggests you wash this mask by hand. You can find it on The Big Silk website.

These affordable Marks and Spencer masks, sold in a handy five-pack, are made of two layers of a thick cotton/elastane blend. They do the job well while still being comfortable to breathe through, which is why they are a top pick.

Out of the packet, they’re able to filter 86% of tiny particles, and 79% after five washes. They’re not adjustable, so may not suit everyone: one of our panel of testers said this mask was too small for their face, but for the others it was considered well-fitting and comfortable. They’re available at Marks and Spencer.

This simple, fabric face covering impressed in our tests. The triple-layer construction did a good job in our bacterial filtration tests, capturing 80% of particles on the first test and 72% after five washes. Our testers also found it easy to breathe in and comfortable to wear with minimal gaps. It’s available in kids, small/medium and large to suit different face sizes, and two colour options.

The mix of cotton, polyester and a touch of elastane (spandex) means this face covering is soft, comfortable and a little stretchy. The instructions are quite limited and they’re only on the packet, so take a look at it before you throw it out. At the time of writing, these masks are widely available: you can pick them up from NEQI, Boots and Ocado. A pack of three typically costs £15 (£5 per mask), although we’ve spotted them for £10 at Ocado.

For something a little more colourful, these tightly woven cotton sateen pleated masks come in a pack of three (or a bundle of six for £30), with one striking design each from Halpern, Mulberry and Raeburn. They did well when filtering particles – managing 72% of particles on the first test, 73% after five washes – while also being some of the most breathable masks we looked at.

A nose wire allows you to create a snug fit, but the adjustable ear loops can be a bit fiddly to get right. You get two protective cloth pouches in the pack to store your used mask in while out and about before washing it, which is handy. The manufacturer says the masks are good for 50 uses before recycling, so a pack of three will last around five months.

Profits from the sale of these face coverings go to charity. These masks also come in a pack of three for £15. At the time of writing, they’re also widely available: you can find them at Boots (where they’re currently down to £10), Sainsbury’s, Argos, Waitrose and direct from Bags of Ethics.