‘The front line of all democracies’: Taiwan lobbies for free-trade deals

London: Taiwan has called on Australia and Britain to back their admission to the prestigious Trans-Pacific Partnership free trading club, saying they should be invited after China’s shutdown of Hong Kong democracy.

Former Prime Minister Tony Abbott, who recently said he would not sign a trade deal with China if it were an option today, has backed Taiwan’s call.

After former US President Donald Trump quit the bloc as soon as he assumed office in 2017, the partnership was renamed the Comprehensive and Progressive Agreement for Trans-Pacific Partnership, and now comprises Australia, Brunei, Canada, Chile, Japan, Malaysia, Mexico, New Zealand, Peru, Singapore and Vietnam. Britain is applying for membership now that it has left the EU’s single market.

Taiwan’s permanent representative in London, Kelly Wu-Chiao Hsieh told The Sydney Morning Herald and The Age that Taiwan should join the partnership with “fellow democracies and like-minded countries”.

“Taiwan has become the front line of all democracies to defend against China’s expanding authoritarianism,” he said. 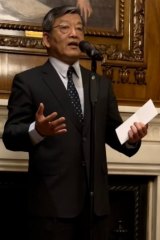 “These sanctions are not unique. In 2020, Australia was subject to economic coercion by Beijing,” the report said.

“Given the threat it faces and its dependency on the Chinese economy, Taiwan must be included.

“This would not only soften the impact of China’s actions but also, if effectively implemented, could deter future threats of this kind,” the report said.

Former Prime Minister Tony Abbott, who sits on the UK Board of Trade and visited India last week representing the Australian government on a trade mission, said Australia should negotiate its own free trade agreement with Taiwan, as New Zealand has done.

“ I think it would be good for Taiwan, good for the Trans-Pacific Partnership and good for this sense of solidarity between like-minded democracies if Taiwan was brought in from the cold rather more than it currently is,” he told the Westminster think tank Policy Exchange.

“I do observe there were a number of countries looking to join the CPTPP … and I think it is a big opportunity to build an alliance of like-minded free-trading nations,” she said.

Taiwan said it was already liberalising its regulations to make membership of the bloc more attractive and that Australia and New Zealand architects would benefit first from a trial allowing greater recognition of professional qualifications.

In 2018, Australia reportedly backed out of forming a bilateral trade deal with Taiwan after threats from Beijing.

While Taiwan already trades with all 11 members of the partnership, allowing them entry into the CTPP could be complicated for Western allies such as Australia, which does not recognise Taiwan as a nation, in adherence to the One China policy.

All, democra, Front’, line, of, the
World News