Home » World News » ‘There is no other way’: Judges on hunger strike in fight for Tunisian democracy

‘There is no other way’: Judges on hunger strike in fight for Tunisian democracy

Tunis: On his 33rd day without food, Judge Mohamed Tahar Kanzari lay curled on a mattress on the ground, a floral sheet covering his frail body. 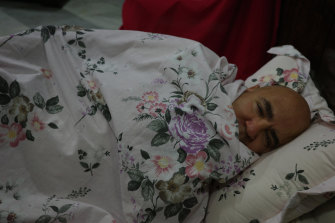 Judge Mohamed Tahar Kanzari, 49, who has been on a hunger strike for more than a month, rests on the floor of the Judges’ Club in Tunis.Credit:Washington Post/Siobhán O’Grady

Three days later, a medical team assessed Kanzari’s condition as so dire he had to be transported to a hospital. He is currently in an intensive care unit, but is continuing his strike.

Kanzari, a juvenile court judge, is protesting being dismissed from his post last month after President Kais Saied issued a decree on June 1 that gave himself the power to fire judges. Kanzari was among 57 judges abruptly dismissed and accused of being corrupt or protecting terrorists.

Legal experts say the decision appears to be part of a politically motivated effort to undermine the independence of the country’s judiciary and ensure Saied’s growing grip on power in a country once celebrated as the region’s sole democratic success story.

The president said in a speech that the mass dismissal came after he had “given opportunity after opportunity and warning after warning to the judiciary to purify itself”. 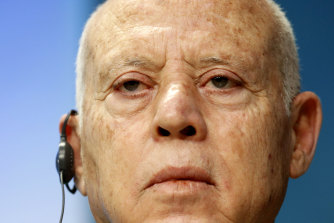 Kanzari is one of several of the dismissed Tunisian judges to since launch hunger strikes and demand the immediate reversal of the decree, an extraordinarily rare act of protest for any judge anywhere in the world. The hunger strike was launched after judges first spent weeks on a broad general strike, in which they suspended their work in courts.

The two other judges currently on strike were also hospitalised on Thursday. One was later released. They are also continuing their strike despite the decline in their physical condition.

Diego García-Sayán, the UN special rapporteur on the independence of judges and lawyers, said he is not aware of judges in any other country having ever participated in such a hunger strike, underlining the seriousness of Tunisian judges’ concern over the fate of their country’s judiciary.

It is common practice among authoritarians, he said, to concentrate “their efforts on attacking the judiciary, controlling the supreme court and dismissing judges”.

Poland and Hungary are two of the most prominent cases where the executive branch has been accused of systematically stripping away protections from the judiciary or picking government-aligned judges – earning rebukes from the European Union.

“One of the key elements of democracy is an independent judiciary,” García-Sayán said, “not as a right just for judges, but mainly as a right for society.”

The UN watchdog has voiced his concerns over threats to Tunisia’s judiciary independence and has been waiting several months to enter Tunisia on a formal visit that would allow it to investigate the situation. Such a visit is required in order to write an official report to present to the UN Human Rights Council in Geneva.

Tunisia is the only democracy that came out of the Arab Spring. Under the former strongman president, Zine el-Abidine Ben Ali, the judiciary lacked independence and was largely controlled by the executive branch of the government. The country’s post-revolution constitution ensured checks and balances by strengthening the independence of the judiciary and establishing a newly independent High Judicial Council tasked with overseeing judges’ affairs.

Then, last summer, amid political infighting and complaints over the ineffectiveness of the country’s lawmakers, Saied suspended parliament and fired the prime minister.

Some immediately decried the move as an unlawful coup. Others, frustrated by years of political gridlock, celebrated it as a brave step to weed out unproductive politicians they blamed for the economic and social woes that had long plagued the country.

But the suspension of parliament was soon followed by other controversial moves, including the dissolving of the independent High Judicial Council and later the firing of the judges. Saied’s actions indicated a lack of belief in the separation of powers enshrined in the 2014 constitution and preference for all the branches of the government to be subordinate to him.

Most recently, a new constitution written by Saied himself passed in a referendum held Monday where less than a third of the eligible voters participated.

“The judiciary is the only remaining check on executive power in Tunisia,” the International Commission of Jurists warned in a statement prior to the referendum.

The judges have been waging their own battle against what they say is the dismantling of the system of checks and balances necessary for a functioning democracy.

Said Benarbia, director of the Middle East and North Africa region for the International Commission of Jurists, said the June decree and Kanzari and others’ dismissals is just part of “the smear campaign that the president launched from the beginning about how the judiciary is corrupt and judges are corrupt.”

Of the 57 judges dismissed on June 1, he said, only a handful have had any cases filed against them that might involve serious allegations.

Youssef Bouzakher, who was dismissed from Tunisia’s highest court of appeals and was president of the High Judicial Council, said the president has to say on what grounds the judges were fired.

“If they do not publish the accusations, then these accusations do not exist, so this decree should be rolled back,” he said.

The abrupt dismissals have created a culture of intimidation among other judges who fear that they too may be dismissed without legitimate cause or warning, said Anas Hmedi, 50, president of the Association of Tunisian Magistrates.

The judges on hunger strikes have been sleeping on the floor of the Judges’ Club in Tunis, a building that typically hosts conferences and other events but transformed into a makeshift ward. They have had regular doctor visits, and they monitor their blood pressure and oxygen levels themselves in case of medical emergencies.

“It’s our duty [to help them],” Hmedi said. “Kais Saied’s regime did not anticipate this; he thought Tunisian magistrates would drop it and would align with his regime. . .He was shocked and stunned not only by the resistance, but by the level of resistance.”

“He’s the only decider of everything,” Aicha Benbelhassen, 39, vice president of the Association of Tunisian Magistrates, said of Saied. “We have no guarantee and no possibility to have our rights without this hunger strike or general strike.”

Kais Sabbehi, a judge who was also dismissed in June, joined the strike in July and has spent the past three weeks sleeping on a mattress on the floor near Kanzari.

He has gone without food for more than three weeks, is experiencing extreme fatigue, stomach problems and insomnia but said he will continue his strike until further notice. Like Kanzari, he was hospitalised and sent to the intensive care unit on Thursday night. He is suffering from severe kidney malfunction, Benbelhassen said.

He has two children who he said are watching his strike “with a lot of anxiety,” he said prior to his hospitalisation. But the solidarity of his fellow judges – both those engaged in the hunger strike and others who are offering other forms of support have kept him motivated.