The idyllic car-free Channel Island of Sark is now trying to double its falling population which now stands at just 492.

German entrepreneur Swen Lorenz, who has been based on the island of Sark since 2004, has now launched Sark Society in a bid to rescue the island’s dwindling population, which stood at around 650 ten years ago, and raise it by another 500.

The island, which is nestled in between Guernsey and Jersey, is famous as one of the few remaining places in the world where cars are banned from roads and only tractors and horse-drawn vehicles are allowed.

However its diminishing population has now left its properties empty and seen its businesses struggling to survive. 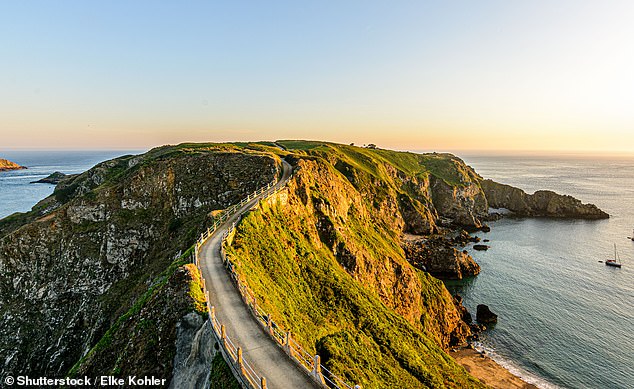 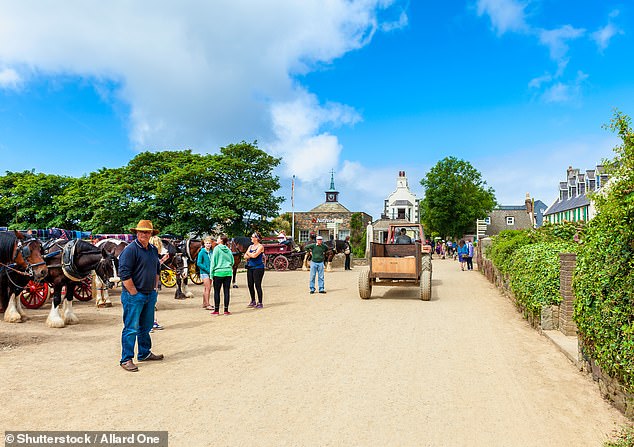 The island, which is the smallest independent state of the British Commonwealth, has banned cars from the roads 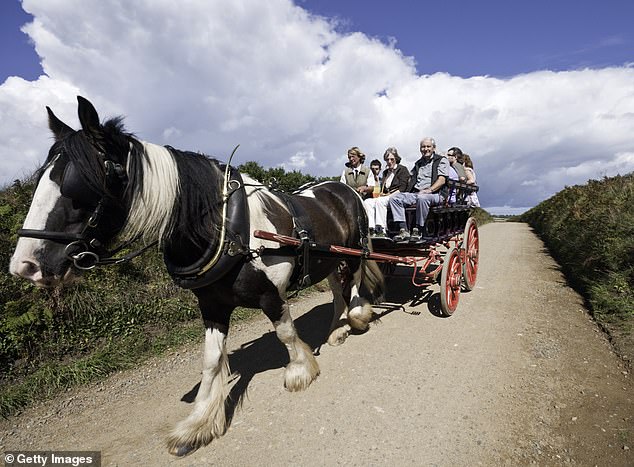 The new scheme has got the backing of Seigneur Christopher Beaumont, who holds the hereditary title of head of the island.

Mr Lorenz said Sark, which he describes as ‘a secret European microstate’, had experienced a drop in population over the last ten years.

In a statement, Mr Lorenz said: ‘Be one of just 500 people to create a new lifestyle for yourself.

Mr Lorenz listed the benefits of island life as including no income tax, no capital gains tax, no inheritance tax, no VAT, no employment law and no bookkeeping requirements for individuals or companies.

He said so far more than 20 high-net-worth individuals have signed up, including one couple who had already relocated.

He also described it as ‘possibly Western Europe’s best jurisdiction to live in.’

He added: ‘Sark is the small island I call home. Every year, the island attracts over 60,000 tourists. It is mostly untouched and famous for stunning scenery and a gentle pace of life.

‘Indeed, if you wanted to get away from the troubles of the world (without having to leave Western Europe), Sark is probably one of THE best places to consider right now. 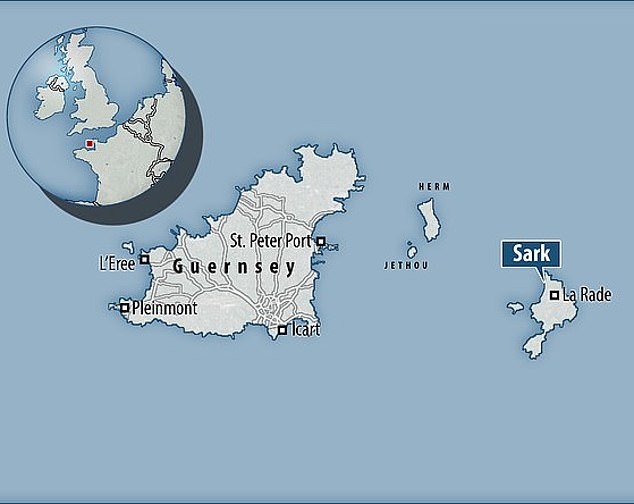 The island of Sark, which is nestled between Guernsey and Jersey, forms a part of the Channel Islands and sits off the coast of Normandy, France 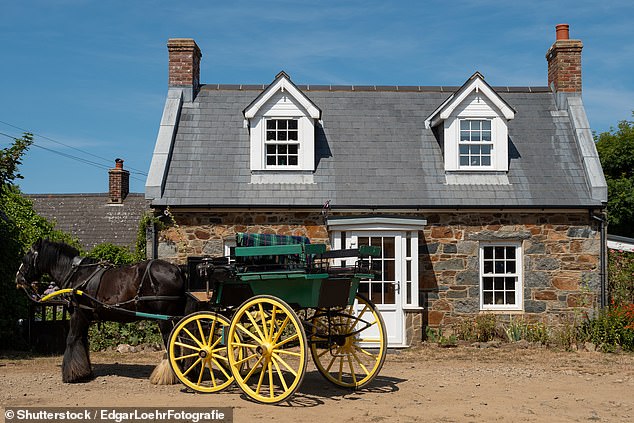 The Sark Society is now trying to raise the population of the island by another 500. Pictured: A traditional house on the island of Sark 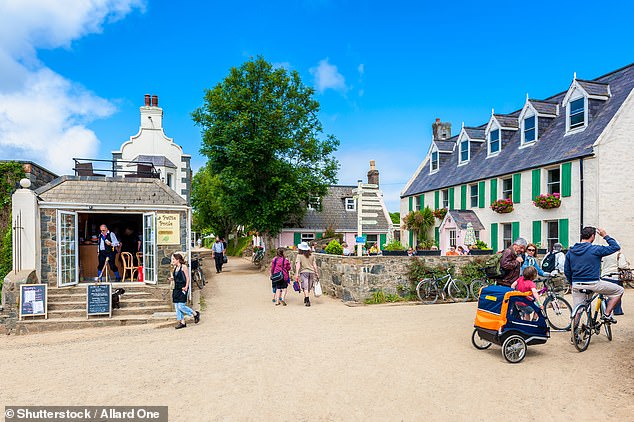 German entrepreneur Swen Lorenz said the perks of living on the island include no income tax, no capital gains tax, no inheritance tax, no VAT, no employment law and no bookkeeping requirements for individuals or companies

‘The government is debt-free, violent crime is unheard of, and social unrest is almost inconceivable.

‘I travel to many places from Sark and I always enjoy coming back.’

Other things Mr Lorenz said would appeal include fast Internet and 4G, easy access to Guernsey, and low set up costs with apartments costing around £900 per month.

He added: ‘Sark is suddenly becoming obvious as the kind of safe haven that many people are now looking for.

‘Your tax return takes one minute to file, and you are done with the government for the rest of the year.

‘You can buy an entire lifestyle by moving to Sark. Sea, nature, and scenic views. A real community, where neighbours help each other.

‘The opportunity to rid your life of career politicians, power-crazed bureaucrats, and silly laws that rob you of your freedoms. All of Sark’s members of parliament are volunteers and there is no bureaucratic apparatus.

‘Sark offers a combination that suddenly many more people find almost too good to be true. Only that it is true.’

Two pioneer settlers have now moved there from London to be ‘guinea pigs’ for the relocation scheme. 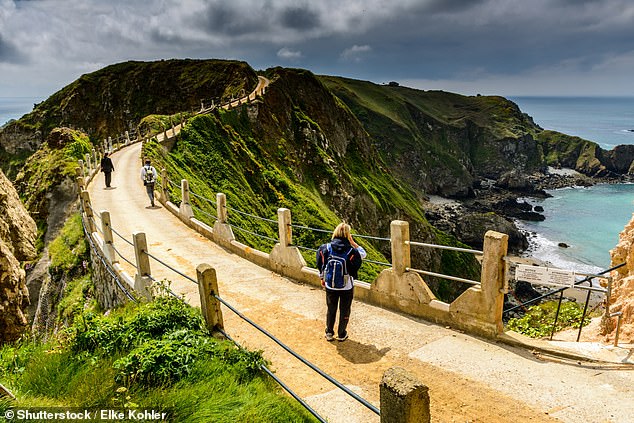 The island is only 5.5 square kilometres and has no street lights to pollute the skies. Pictured: Hikers walk through the island

Andrew and Claudine Boast are two professionals and Internet entrepreneurs in their late 30s who Mr Lorenz said he has known for more than a decade.

He added: ‘Claudine and Andrew were my guinea pigs (and they don’t mind me calling them that). I figured that if they settle in well, others will follow.

‘Indeed, there are now several friends and colleagues who will shortly move to Sark.

The island of Sark forms a part of the Channel Islands and sits off the coast of Normandy, France.

It is the smallest independent state of the British Commonwealth.

The island has been independently governed as a ‘Crown dependency’ since 1565.

It has a democratic government that is run by a local parliament and the hereditary head of state is called the Seigneur.

The island, which sets its own laws based on Norman legal traditions, is only 5.5 square kilometres.

The island has no street lights to pollute the skies and became the World’s First Dark Sky Island in 2011.

Cars are banned from roads and only tractors and horse-drawn vehicles are allowed.

‘And they should. There is local support for repopulating Sark, including from the island’s Seigneur who would like to see the population increase to 800 or maybe 1,000.

‘There is no official law or decree for increasing the population, but as the holder of the feudal title to the island, the Seigneur’s leadership couldn’t be any clearer.

‘Just for the avoidance of doubt, Sark will never be able to accommodate too many people. Everyone on Sark loves that the place is stuck in an era long gone by.

‘But even Sark cannot escape economic and financial reality. The island is currently teetering on edge, because the population is now too small to sustain businesses, such as the local supermarket.

‘It has never seen the kind of over-development that you can find on neighbouring Guernsey, or in places like Spain. You can fix up or even replace an existing building, but adding an entirely new building is restricted to residents who have been there for at least 15 years.

‘Even during the boom of the mid-2000s, when tens of millions of pounds of tourism-related investment poured into Sark, the island only had 650 residents.

‘The population has since gradually sunk to its current level. Jobs fell away, and the local government didn’t make an effort to bring in new residents. With the shrinking population came an alarming ageing of the community. The average age of Sark’s population is now over 60, compared to 42 in the UK.’

Mr Lorenz has launched the website and said he will do everything to help people relocate.

He added: ‘As a resident I am greatly concerned that we are reaching a point where the community is simply not viable anymore.

‘I have just decided to step forward and put myself out there and set up a website and a service where people can get help if they want to move to Sark.’

Seigneur Beaumont said he had been in discussions with Mr Lorenz ‘for a long time’ about the idea.

He added: ‘If it becomes successful then we’ll find more people wanting to come to Sark than we’ve got space for.

‘And I would prefer to be in that situation than in a situation where we have piles of empty properties and nobody knowing that there’s a place to live.’

The island’s government, the Chief Pleas, has been approached for comment.