When news broke that Donald Trump's reign was ending, the President was on a golf course that he owns in Virginia, playing his last round as a non-loser. In Washington, about 125 of his worshipful supporters gathered on the stoop of the Supreme Court to "stop the steal," then circumnavigated the US Capitol seven times, because that's how the Israelites conquered Jericho, according to the Book of Joshua. And a pair of Trump's most loyal surrogates made a defiant stand on the gravelly backside of a landscaping business in an industrial stretch of north-east Philadelphia, near a crematorium and an adult-video store called Fantasy Island, along State Road, which leads – as being associated with Trump frequently does – to a prison. 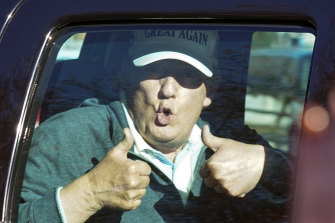 President Donald Trump gives two thumbs up to supporters outside his golf club after losing the presidential election.Credit:AP

Rudolph Giuliani, America's mayor turned Trump's sloppy fixer, squinted into the autumnal sun at journalists who had assembled outside Four Seasons Total Landscaping – a choice of location that multiple Trump staffers could not account for, saying that it was the work of the campaign's Pennsylvania advance team. Literally anywhere else would have conveyed more legitimacy on the enterprise, but legitimacy did not seem a high priority for one of the last battles of a lost war.

"Joe Frazier is still voting here – kind of hard, since he died five years ago," Giuliani said in a meandering monologue, referring to the champion boxer who died in 2011 as an example of Philadelphia's unproven election malfeasance. "But Joe continues to vote. If I recall correctly, Joe was a Republican. So maybe I shouldn't complain. But we should go see if Joe is voting Republican or Democrat now, from the grave. Also Will Smith's father has voted here twice since he died. I dunno how he votes because his vote is secret. In Philadelphia, they keep the votes of dead people secret."

Or rather: Where to end?

In reality, a preponderance of mailed-in ballots – which were counted last, in many places – had slowed the process and delayed the inevitability of Biden's win. Poll workers were just trying to do their civic duty – extracting, flattening, scanning and counting ballots into the night – but this was not good enough for the President's supporters. They showed up with instructions tailored to whatever way the tide was shifting.

"Stop! The! Count!" they chanted on Wednesday afternoon outside the TCF Centre in Detroit.

"Count! The! Votes!" they chanted on Wednesday night outside the Maricopa County Elections Department in Phoenix. 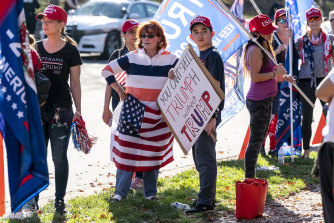 On Friday, as the counting continued in the convention centre, Biden fans held an impromptu street party on one side of a nearby intersection while Trump supporters seethed on the other side.

Biden "is a senile gangster with the IQ of a sack of carrots," he said.

That evening, a federal judge heard arguments from attorneys who wanted to stop the counting in Nevada's Clark County because Republicans could not conduct "meaningful observation." The judge wondered how to interpret the phrase. How many people should observe, and from what distance? Should observers be entitled to hear a ballot-counter's every utterance? What if one of the poll workers had a soft voice, and could not be overheard?

"At what point does this get to the ridiculous?" said Judge Andrew Gordon. His question was answered the following day, at Four Seasons Total Landscaping.

Sean Middleton, the company's director of sales, was at a Bible study when he got the call to come to the shop and help prepare for Guiliani's news conference.

"I was pretty happy because it got me out of Bible study," he said on Saturday, adding: "I have no idea why [the campaign] wanted to do it here. I don't know how the government works. Maybe they saw on satellite images that we have a big back lot and proximity to [Interstate] 95?" 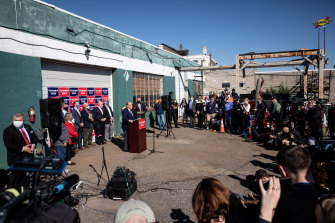 Attorney for the President, Rudy Giuliani speaks to the media at a press conference held in the car park of a landscaping company on November 7 in Philadelphia, Pennsylvania. Credit:Getty Images

Middleton said he was not aware of any connection between the landscaping company and the Trump campaign, which did not immediately provide an explanation for why the news conference was held at that location.

Giuliani stood in the landscaping company's dusty parking lot with campaign adviser Corey Lewandowski, in front of a garage door plastered with Trump placards, flanked by a few disgruntled GOP poll observers, facing a gaggle of journalists. He claimed there was fraud; he also said GOP observers were prevented from witnessing fraud. About 30 minutes into his show, Giuliani was informed that the race had been called for Biden on television. He stretched out his arms, looked to the heavens and seemed to mock-crucify himself on the notion.

"We are leaving all legal options open," said Trump legal adviser Jenna Ellis in an email on Saturday, which she sent from an airplane flying back from a "Stop the Steal" rally in Wisconsin. Asked to describe the emotions of this moment, as Trump World teetered on the brink, Ellis said she was "disgusted" by Biden. Lewandowski, when reached by phone after the Giuliani news conference, answered more flatly.

"Stop the Steal" rallies popped up all over the country this weekend, including at the Supreme Court on Saturday afternoon.

In Washington, Always-Trumpers who planned to encircle the Capitol were awash in positive emotions, despite heckles from people passing by.

The President is "going to get that miracle that he needs because God will not let this nation fall into chaos," said Bethesda resident Karen Simon, carrying a huge Trump flag.

"Go home! The game is over!" someone yelled at the group.

"What pathetic losers," said another.

But the marchers had faith that God and Trump would prevail. And so,as in the Book of Joshua, they began their seven laps in pursuit of victory.

One. A marcher said the "Hail Mary" over and over again.

Two. A group of young men spoke of "malnourished socialists" and the Carter-Baker Commission on election reform.

Three. They were joined by a small group carrying a tapestry of Jesus Christ.

Four. There was talk of former national security adviser Michael Flynn, and a pardon that was sure to come, and a truth that would finally be revealed.

Five. Across the river in Virginia, a crowd gathered outside Trump's golf club. One sign said "You're fired."

Six. A stream of Biden supporters, on their way to a massive block party by the White House, doubled over in laughter at the marchers.

Seven. Victory was indeed coming, but not for Trump.

Understand the election result and its aftermath with expert analysis from US correspondent Matthew Knott. Sign up to The Sydney Morning Herald‘s newsletter here, The Age‘s here, Brisbane Times‘ here and WAtoday‘s here.