Unions react with fury as Government suggests classes be held OUTSIDE

Headteachers have reacted with fury after the Government suggested they move classes outdoors to prevent the spread of Covid.

The Department for Education said it was an extra measure to ‘think about’ if schools see a cluster of cases, in official guidance published this week.

The document also suggested assemblies and exercise could be held outdoors to reduce transmission.

Head teachers’ union ASCL said yesterday it would soon be too cold to make children learn outside. 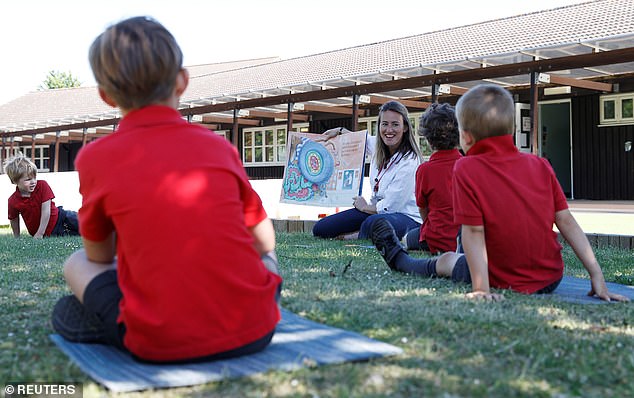 The Department for Education said moving classes outdoors was an extra measure to ‘think about’ if schools see a cluster of cases, in official guidance published this week (pictured: a teacher during an outdoor class at Watlington Primary School in June last year)

Geoff Barton, the union’s general secretary, said: ‘The suggestion that schools could realistically consider holding assemblies and lessons outdoors during the autumn term, as temperatures plummet, is a total fudge. What is needed is ventilation equipment in school buildings as soon as possible.’

The National Education Union agreed that ‘measures such as outside lessons will be difficult in winter’. General secretary Kevin Courtney described the lack of plans in place for September as ‘concerning’.

A DfE spokesman said: ‘As we learn to live with the virus across society, we must strike the right balance of measures so that our children can continue with their lives and education in the best possible way.’

The guidance is contained in the Government’s updated Covid contingency framework on what to do if five closely-interacting people – or 10 per cent of the school – test positive in a ten-day period.

It suggests thinking about ‘whether any activities could take place outdoors, including exercise, assemblies or classes’ and ‘ways to improve ventilation indoors, where this would not significantly impact thermal comfort.’ 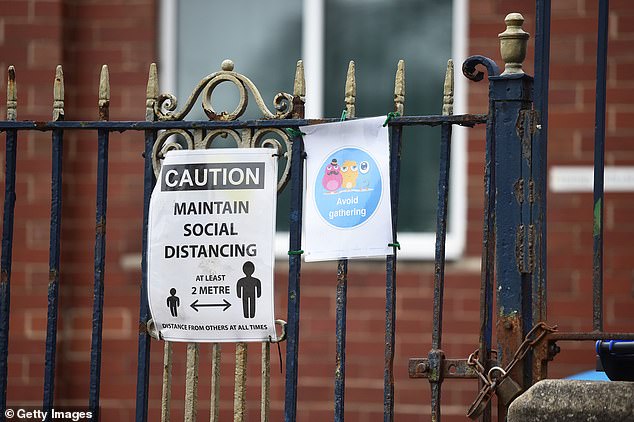 The document also suggested assemblies and exercise could be held outdoors to reduce transmission. But head teachers’ union ASCL said it would soon be too cold to make children learn outside (file photo taken in Kidsgrove in February this year)

Mr Barton also expressed concern about the timing of the new guidance – while teachers are away and schools are closed.

He told the Times Educational Supplement: ‘We are concerned that the contingency framework is growing during the summer holidays and with very little time for schools and colleges to update their planning.’

Teachers and school leaders have also reacted strongly to the update on social media.

One primary teacher said: ‘Soon it will be autumn . . . And then winter. I’m not sure outdoor lessons are going to be suitable for students or teachers.’

Another said: ‘Outdoor lessons – in this English climate?’