Up to 1,600 migrants arrive in UK in just FOUR days

Up to 1,600 migrants arrive in UK in just FOUR days: Another 150 people on small boats are picked up in Channel as number making crossing so far this year nears 14,000

The number of migrants reaching the UK have hit around 1,600 in the past four days after another 150 on small boats were picked up in the Channel today.

Among those to arrive today, a woman carrying a baby wrapped in a blanket was helped ashore by a Border Force officer, while other children old enough to walk were led up to the Kent quayside.

The number of migrants arriving today have not yet been officially released, though they are thought to be around 150 so far.

Another 158 migrants arrived on Sunday in the first landings in two weeks. On Monday, 785 migrants in 27 incidents were intercepted according to official Home Office figures, taking the number this year so far to 13,370.

On Tuesday another large number were detained. Although official numbers have not been released, the Home Office said it was ‘under 500’. 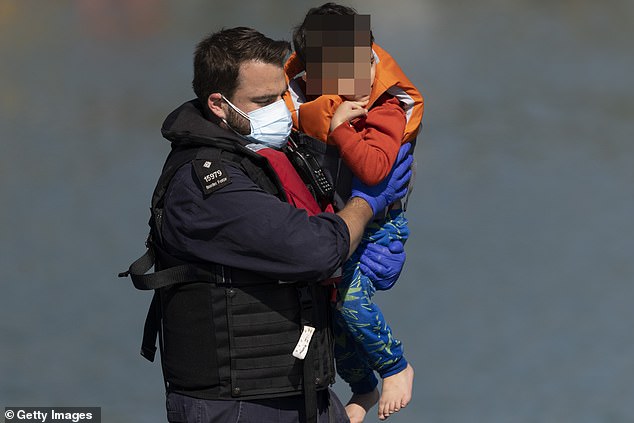 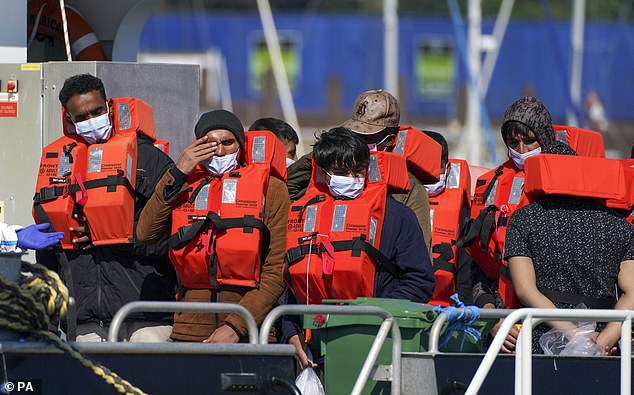 A group of people thought to be migrants are brought in to Dover, Kent, aboard a Border Force vessel 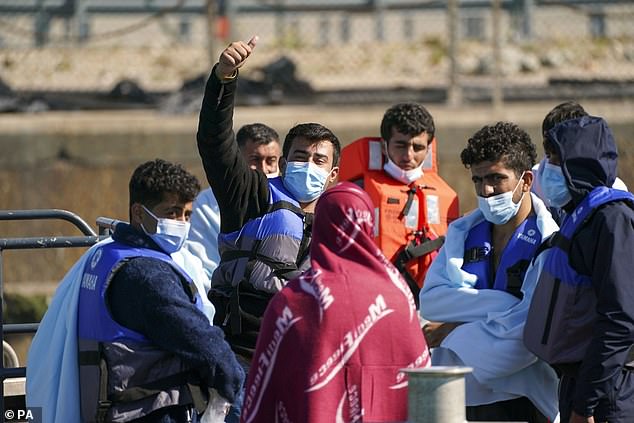 On a hot and sunny Wednesday, dozens of people were seen arriving in Dover aboard Border Force vessels 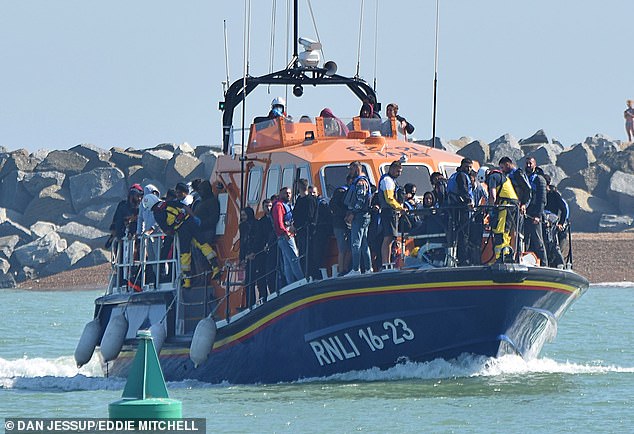 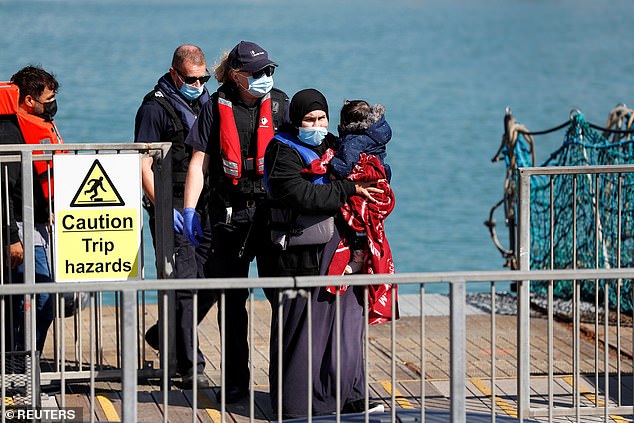 A migrant, rescued from the English Channel, walks holding a child in Dover today

Wrapped in blankets and wearing face masks, many of those arriving today had to wait patiently on board before they were finally able to disembark.

A young family were among the first to be escorted up the gangway to be met by immigration officials.

The mother held her young daughter in her arms. Another small boy was carried by a Border Force officer as his father walked closely alongside.

Sussex Police said: ‘A group of people on board a boat crossing the English Channel were towed into Eastbourne Harbour by RNLI lifeboat volunteers.

‘Sussex Police were called to Sovereign Harbour at 1pm on Wednesday, September 8.’

After a two week lull in crossings due to high winds in the English Channel, people traffickers took advantage of a break in the weather to resume crossings.

It comes as Priti Patel holds showdown talks with her French counterpart over migrant crossings today after the MP for Calais dismissed threats to withhold £54million of funding.

The Home Secretary will meet Minister of the Interior Gerald Darmanin in London amid growing alarm at the record numbers trying to get across the Channel.

There have been complaints that Paris is not doing enough to block journeys, despite the pledge of cash from the UK to help the efforts.

Demands to send would-be refugees straight back to France have also been decried as dangerous and a breach of international law. 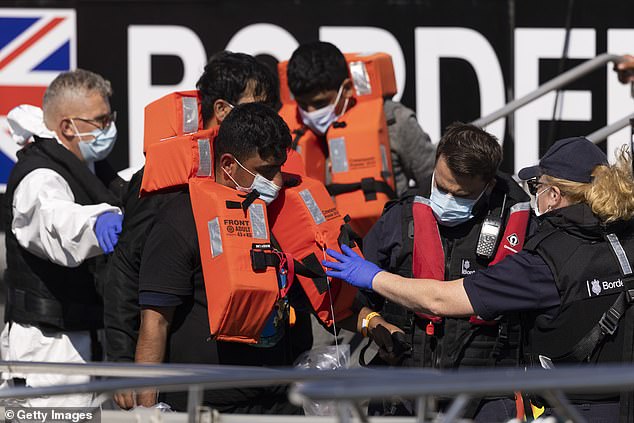 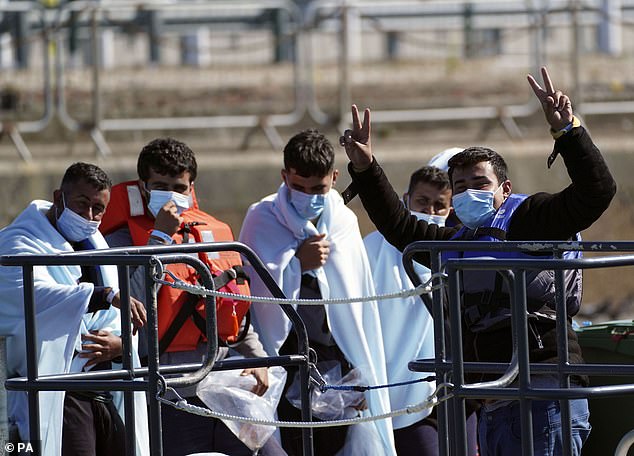 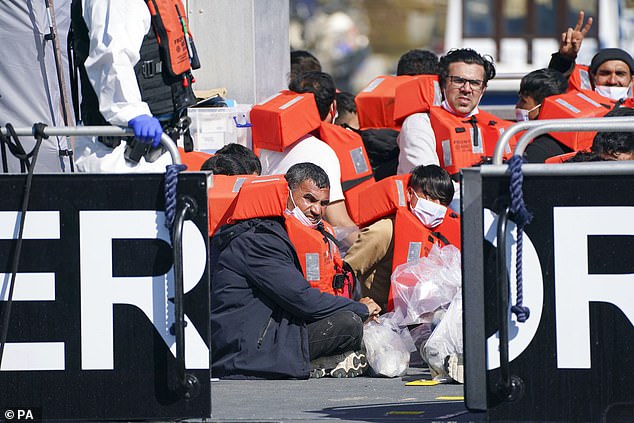 A group of people thought to be migrants are brought in to Dover, Kent, aboard a Border Force vessel following a small boat incident in the Channel 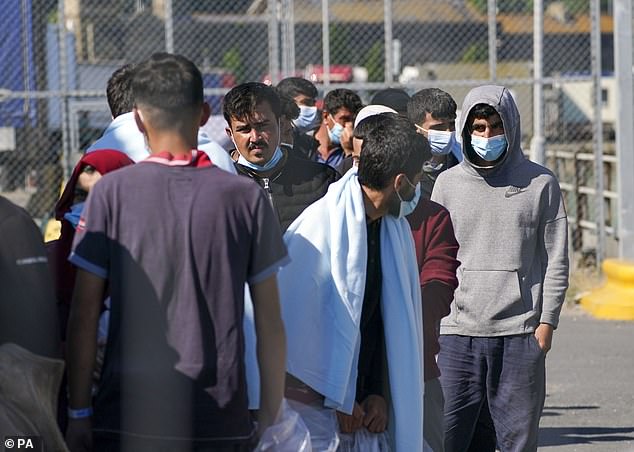 Wrapped in blankets and wearing face masks, many of those arriving today had to wait patiently on board before they were finally able to disembark 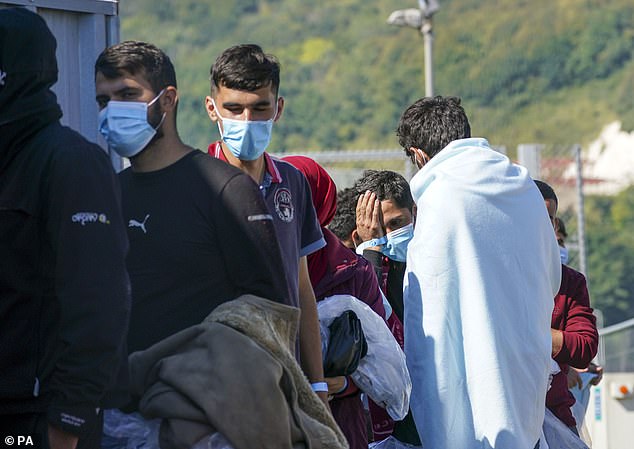 A group of people thought to be migrants are brought in to Dover, Kent this afternoon

Grilled on the situation at PMQs this afternoon Boris Johnson admitted that the government is reliant on the French, but insisted ministers will use ‘every possible tactic’ to ease the problems.

Government sources told MailOnline the discussions today will focus on ‘working together and outcomes’.

Pierre-Henri Dumont, who represents Calais in the French National Assembly, warned that ‘nothing can stop’ migrants coming.

‘The fact is, we’ve got 300 to 400 kilometres of shore to monitor every day and every night and it’s quite impossible to have police officers every 100 metres because of the length of the shore,’ he told BBC Radio 4’s Today programme.

Mr Dumont added that while the main reason for the current increase in Channel crossings is the warmer weather, there are ‘numerous causes’ to address about why they are made in the first place.

‘That’s the key point – the causes we need to address are numerous,’ he added.

Mr Dumont cited migrants being more likely to speak English as one of the reasons, and said it is easier for them to find work in the UK despite their illegal status.

He added: ‘We have more and more patrols. The money that was promised to be given by the UK Government to France is set to maintain this number of patrols that we already doubled a few weeks ago.’