Well-meaning holidaymakers push barrel jellyfish back out to sea

We can save you! Well-meaning holidaymakers try to push a barrel jellyfish back out to sea at Devon beach – but the creature is already DEAD and soon washes up again

This is the moment a group of people at a British beach unsuccessfully try to push a massive barrel jellyfish – which is already dead – back out to sea.

The jellyfish – the sting of which can leave a nasty rash in humans – was seen by a large group of sun-seekers on Bovisand beach, in Devon, last Saturday.

Footage shows the group, which included several children, using their hands to push the jellyfish, which shows no signs of life, back into deeper water. 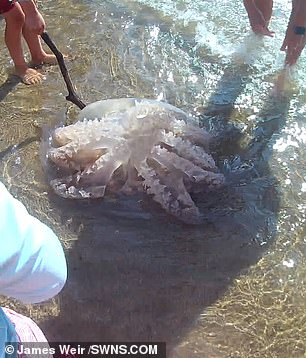 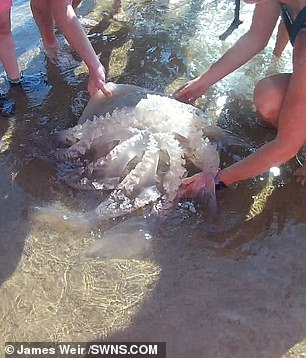 A group of people try to rescue a barrel jellyfish which washed up onto a beach at Bovisand, in Devon. The group, which includes several children, push the jellyfish into deeper water

The video starts with a crowd of children surrounding the jellyfish, which is splayed out on the sand in very shallow water.

One of the children exclaims, ‘it’s a barrel jellyfish’, as another prods the animal with a stick.

A child then says, ‘pick it up!’ before a woman replies, ‘it’s heavy! You try and pick that up. It’s heavy!’ 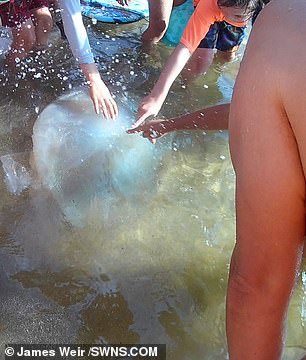 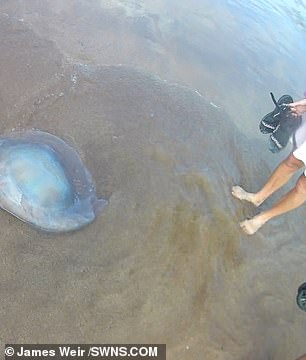 The group late prod the top of the jellyfish and adults in the group push it into deeper water. But the jellyfish is later seen back on the sand as a woman stands next to it

Two of the adults in the group then push the jellyfish further into the water.

It is then seen floating in deeper water further from the beach as interested beach-goers continue to surround it.

One man continues to push it further out but the jellyfish still does not move of its own accord and is then seen back on the sand.

One woman crouches next to it before the man filming says, ‘put your hand on it’, and she does so.

She opens her palm and places it on top of the jellyfish, providing a good indication of just how large the animal is.

Barrel jellyfish have been spotted in record numbers around the British coast this summer.

They usually wash up on UK beaches in May and June, but arrived slightly earlier this year because of warm weather in July.

What are barrel jellyfish and are they poisonous?

Barrel jellyfish, or rhizostoma pulmo, are the largest to swim in British waters, giving them their name of ‘dustbin lid jellyfish’.

They can grow up to 90cm across and weigh as much as 35kg.

The sea creatures prefer warmer waters and are often seen around the UK in May and June. 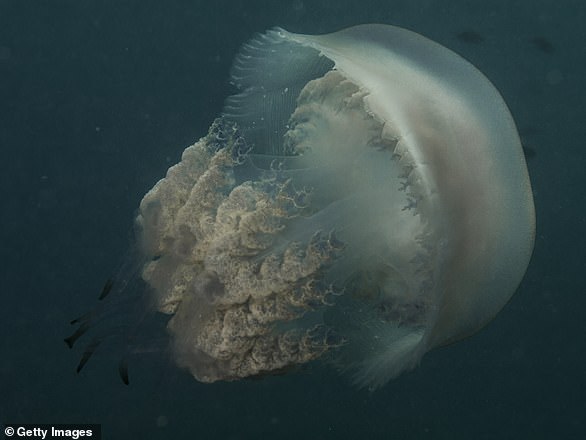 Barrel jellyfish, or rhizostoma pulmo, are the largest to swim in British waters, giving them their name of ‘dustbin lid jellyfish’

They are often spotted washed up on beaches, but it’s rare to see them alive in the water close to the coast.

While they are not poisonous they can leave you with a nasty rash, similar to that of a nettle sting.

Their sting is too weak to be harmful to humans and is only used to capture the plankton they eat.

They have a translucent body with a purple ‘frills’ around their eight arms, which contain hundreds of tiny mouths.