The 28-year-old Irish promo girl asked her followers to post their favourite emoji to describe a vagina – adding that hers is a butterfly. 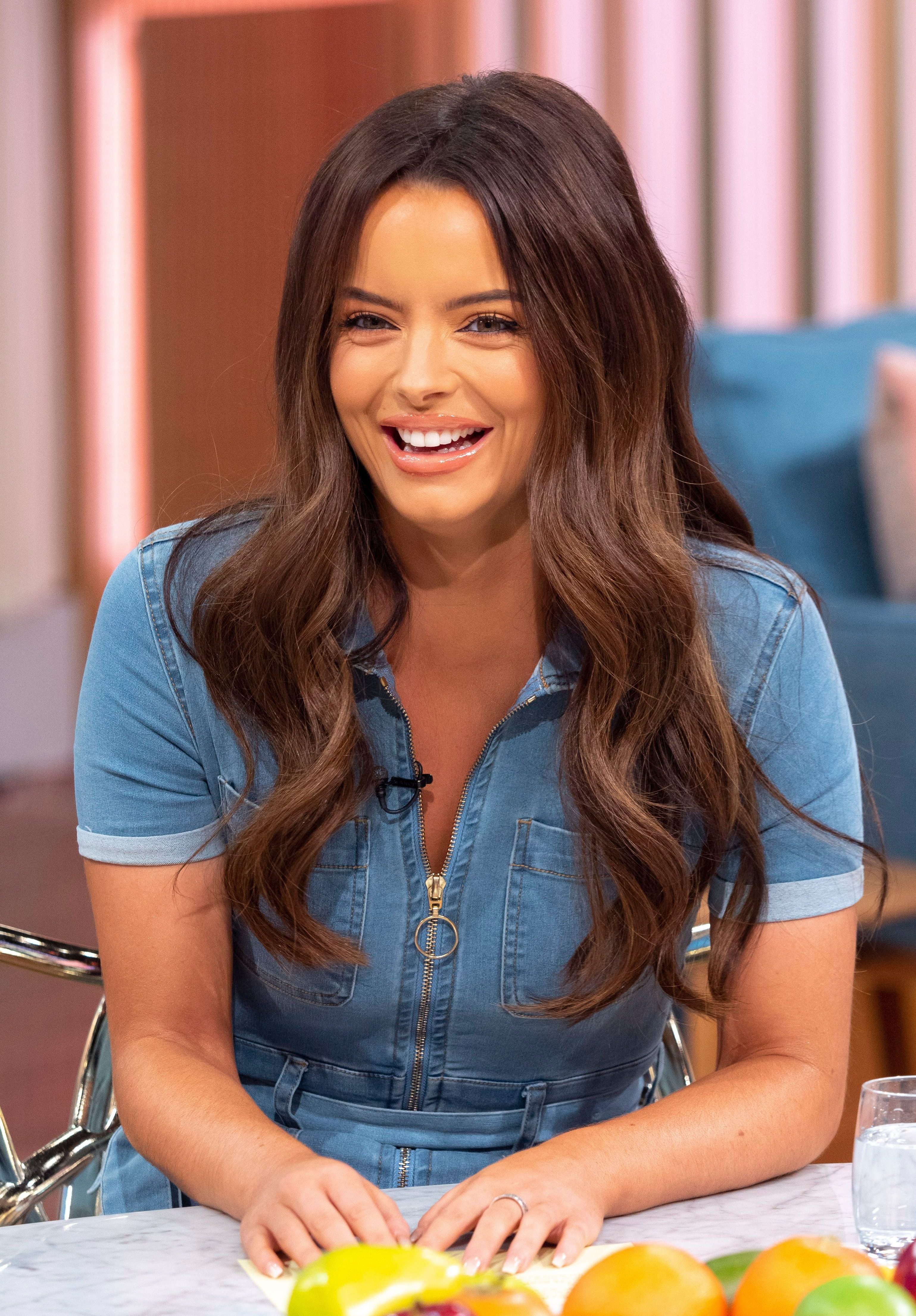 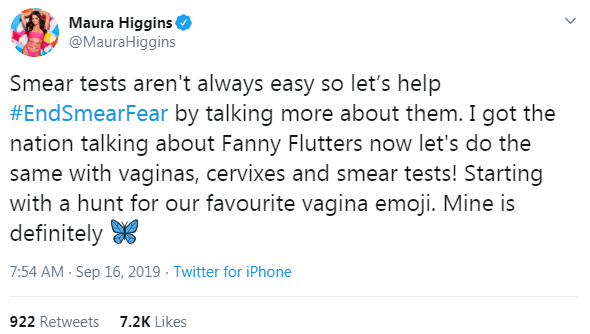 Her catchphrase "fanny flutters" became infamous on the ITV2 reality show this summer – and she is now using it to help back Jo’s Cervical Cancer Trust's #EndSmearFear campaign.

"I got the nation talking about Fanny Flutters now let's do the same with vaginas, cervixes and smear tests!

"Starting with a hunt for our favourite vagina emoji. Mine is definitely [butterfly emoji].”

More than 3,200 women are diagnosed with cervical cancer every year in the UK and nearly 900 don’t survive.

Yet cervical cancer screening rates are at their lowest in two decades, health bosses warn.

Experts warned earlier this year that around three million women in England haven't had a smear test for over three years.

In some areas, up to half of women aged under 50 haven't gone for a cervical screening in the recommended time.

A million women aged 50 to 64 haven't had a smear test for at least five and a half years.

And that's putting them at massive risk from cervical cancer because smear tests can pick up very early changes in cervical tissue.

The cancer is notoriously hard to pick up early but a smear test is your best chance of detecting issues before cancer is even on the cards.

A survey of more than 2,000 women by charity Jo's Cervical Cancer Trust found a third of young women were too embarrassed to go to their test because of their body shape.

The charity's #EndSmearFear campaign aims to normalise chat about smear tests, cervixes and vaginas by encouraging people to search for the best emoji to represent female genitalia on social media.

It has searched Twitter and discovered a huge range are already being used to describe a vagina.

The most popular include the blue butterfly, red rose, wilted red rose, down arrows and a peach.

1. Abnormal bleeding (during or after sex, between periods and also post-menopause)period

The most common and earliest sign of cervical cancer tends to be irregular bleeding.

It happens when the cancer cells grow on the tissue below the cervix.

It's an especially alarming sign in postmenopausal women who no longer have periods. There's no age limit to developing cervical cancer.

Everyone's discharge is different, so it's a case of knowing what is normal for you.

If you find that the colour, smell and consistency has changed, then that's something you really need to have checked out.

When cancer lacks oxygen, it can cause an infection which leads to strange smelling discharge.

3. Discomfort or pain during sex

Pain during sex can be a sign of a number of different issues, but one is cervical cancer.

Because the disease often comes with no symptoms, pain during intercourse is one of the key indicators. It can be a sign that the cancer is spreading to surrounding tissues.

It could be down to you straining something in the gym, or it could be a warning sign that something's wrong with your reproductive organs.

Persistent pain – just one off twinges – in the lower back, pelvis or appendix can be a symptom of cervical cancer.

A loss of appetite and unexplained weight loss tend to be signs that the body isn't working properly – it's trying to conserve energy. If you notice that you're not eating as you normally do, go to your GP.

Kate Sanger, head of communications at Jo’s Cervical Cancer Trust said: “We want to help reduce some of the fear and uncertainty around smear tests and have seen first-hand the power of social media in doing this.

"We’re pleased to be working with Twitter to see smear tests, cervixes and vaginas talked about as normally as using an emoji.

"By encouraging positive conversations we hope more women will feel comfortable asking questions, know where to find support and feel able to book a test if they choose to do so.”

Katy Minshall, head of public policy at Twitter UK said: “With a third of women aged 25-29 not attending the test, we want people to feel safe and supported when talking about smear tests on Twitter.

"Emojis are a core part of Twitter conversation and we want to break down some of the uncertainty and fear about smear tests, and talking about them, with this simple, light-hearted campaign.”

Smear tests don't test for cancer, but rather they detect abnormal cells on the cervix – the entrance to the womb. 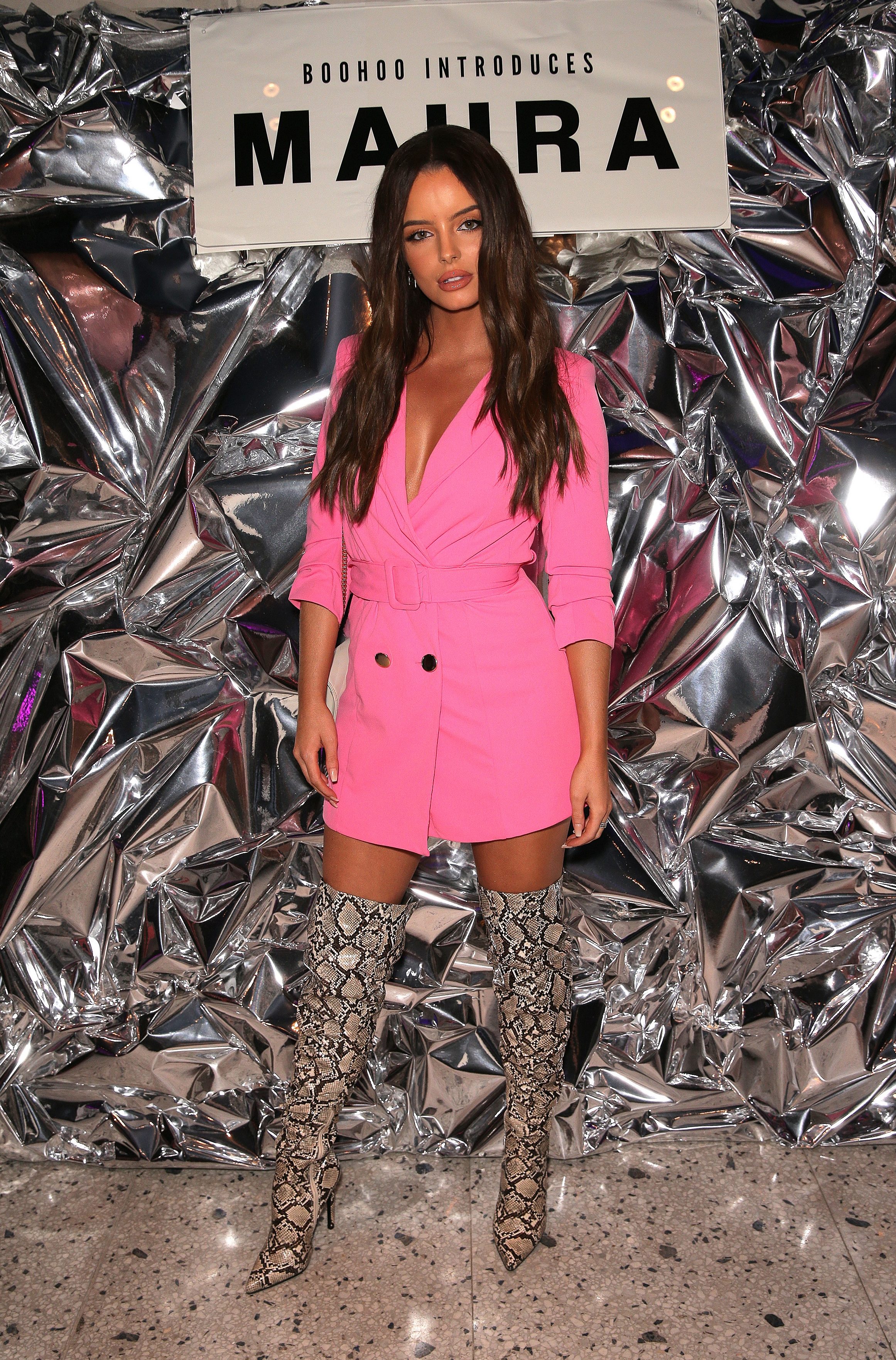 These abnormal cells can indicate if a woman is at risk of developing cervical cancer, and so the test helps doctors spot the earliest signs of the disease.

It's currently the most effective and reliable way of detecting cervical cancer, experts say.

By ensuring you take up the invitation to have smear tests regularly, you give yourself the best chance to avoid the disease.