A wave of COVID-19 anxiety has engulfed Victoria's far south-west after a police raid on a Portland home revealed a man who had recently been released from jail was infected with coronavirus.

Five confirmed cases of COVID-19 have now been linked to the young man and three of the eight police involved in the raid were quarantined for more than a week before learning their tests were negative. 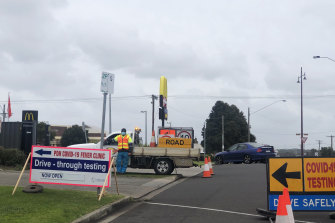 Another cluster – linked to a woman who drove from Melbourne to care for her mother – produced eight confirmed cases and claimed the life of a 59-year-old man.

Until mid-July, only one case of coronavirus had been detected in the entire Glenelg Shire, which stretches from the Victoria-South Australia border to Portland Bay and almost 100 kilometres inland to Casterton.

Portland District Health chief executive Chris Giles is concerned the number of cases linked with the most recent cluster could grow.

The man, 25, and his friends are "an entirely different demographic" to the earlier cluster, she said. 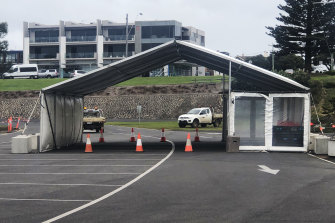 A new COVID-19 testing station on Portland foreshore awaits a drop in gale-force winds before it can be used.Credit:Tony Wright

"This is a group of people who are very socially active, who are moving around in the community, the district and even the state," Ms Giles said.

While 13 cases and one death is a small number compared with the runaway figures for Melbourne and surrounding areas, Portland is a city of fewer than 10,000 people, a four-hour drive from Melbourne.

Passions are now running hot across the region, including over the nearby border in South Australia, where cars with Victorian number plates have been vandalised and their drivers abused.

Timber industry union official Brad Coates said this week his vehicle had been sprayed with faeces and the words “go back to Victoria” in a daylight attack at a Mount Gambier shopping centre car park, about 100 kilometres north-west of Portland.

So common are reports of Victorians being abused when they have crossed the border for shopping or medical appointments that Richard Sage, the mayor of the District Council of Grant – which covers Mount Gambier – went on ABC TV on Friday to call for calm.

The man whose Portland home was raided by police – who were armed with a search warrant but made no arrest and laid no charges – was released from prison in June after serving a six-month sentence for drug and firearms offences.

He recently travelled from Portland to Geelong to celebrate with another former inmate who had just been released, according to several sources familiar with the case who did not wish to be named.

Last Sunday, the man posted to his Facebook page: "Anyone who I have been around since the 24th should get tested for the coronavirus as I’ve just got my results back and I have tested positive."

Demand for coronavirus testing leapt immediately. By Wednesday, an entire Portland street was jammed with cars lined up outside the city’s hospital.

A large new testing station beneath a marquee was established on the city’s harbourside on Friday. But it was foiled when powerful coastal winds made it impossible to operate. Testing continued at the hospital.