Home » Lifestyle » ‘Excruciating’: When a King and a PM tried to empathise with the rest of us

‘Excruciating’: When a King and a PM tried to empathise with the rest of us

Two of the world’s most powerful men are copping flak for being so spectacularly out of touch with ordinary people, thanks to comments they made on Christmas Day.

British Prime Minister Rishi Sunak was declared “excruciating” after he engaged in problematic small talk with a man at a homeless shelter in London while serving him toast, sausages and eggs for breakfast. 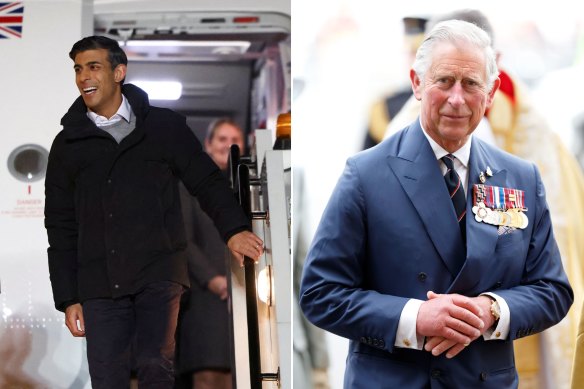 King Charles III was dubbed a hypocrite after empathising, in his first broadcast Christmas message as King, with those in poverty during this time of “great anxiety and hardship”, and waxing lyrical about his faith in people and “a belief in the extraordinary ability of each person to touch, with goodness and compassion, the lives of others, and to shine a light in the world around them”.

Maybe on the surface. But the more you look, the worse it gets.

It all went pear-shaped for Sunak when the PM, one of Britain’s wealthiest people, asked a man to whom he served breakfast whether he “worked in business”.

“No, I’m homeless,” the man, who identified himself as Dean, said, looking down at his hands. “I’m actually a homeless person.”

Sunak, a former Goldman Sachs banker, then asked Dean if he’d like to go into business.

“Yeah, I wouldn’t mind, but, I dunno, I’d like to get through Christmas first,” said Dean, before adding that he hoped another charity might help him find temporary accommodation, so “I’m not on the street”.

So, Marie Antoinette vibes, then.

Or just plain “excruciating”, according to the British deputy leader of the opposition Labour Party.

And what about the King?

He praised one son, the Prince of Wales, and his wife, the Princess of Wales, in his speech – while glaringly omitting any mention of his other son, Harry, the Duke of Sussex and his daughter-in-law Meghan, Duchess of Sussex.

So not exactly a shining example of “goodness and compassion”?

Might 2023 finally be the year we revolt against being schooled on the plight of the common people by those who wouldn’t know the price of a carton of milk if it hit them in the face?

The Haves preaching about the Have-Nots is a tradition that goes back centuries?

Sure is. Seneca, the so-called “fat-cat philosopher” of ancient Rome, warned against the evils of consumerism while accumulating a Trumpian fortune by serving Nero, the famously cruel emperor of Rome. “And don’t forget that Marcus Aurelius was one of the greatest [Stoic philosophers] and he was the emperor of Rome,” says Dr Simon Longstaff, executive director of The Ethics Centre.

And if they taught us anything, it’s that being exceptionally powerful isn’t mutually exclusive with being morally sound?

Correct, says Longstaff. “I mean, no one claims to be kind of perfect consistently except in rare cases,” he says, referring to Socrates, who famously died for his beliefs. (Instead of opting for voluntary exile after being charged with proselytising against democracy, Socrates agreed to be tried, and defended himself by uttering the famous words, “The unexamined life is not worth living” before being put to death.)

“There’s weird things like Pythagoras wouldn’t let people eat beans,” says Longstaff, referring to the Ancient Greek mathematician and inventor of the Pythagorean theorem who was famed for his “rationality” but nevertheless believed that eating beans was a form of cannibalism. “The point is, you get weird things which can come up in people who are otherwise considered to be brilliant.”

Is there a lesson here?

Besides Sunak being mindful of what Britain’s catastrophic cost of living crisis does to people’s ability to survive day to day, and Charles perhaps picking up The Whole Child?

There’s a better way to express compassion without offending the masses, if you’re richer than God. “The things you would expect is you acknowledge your own privilege as part of [your compassion],” says Longstaff. “You [could] say ’look, I feel these things, but of course I also recognise that people might find my position of privilege difficult, and I understand that. But, despite that, these are concerns that we should have, and these are some of the [things we can do].”