Posh, you were not missed! Desperation, some critics might say, but not me – for I was caught up in the moment. JAN MOIR reviews The Spice Girl’s reunion tour debut in Dublin

What do the Spice Girls really, really want? More than two decades after they first clambered aboard their platform boots and zig-a-zigged their way into the nation’s affections, they want to do it all over again.

Only this time they want to make it louder, prouder, bigger and better.

The Spice World Tour opened in Dublin’s Croke Park last night, with a fusillade of fireworks in a blast of hi-energy good fun and good old showbiz sparkle. 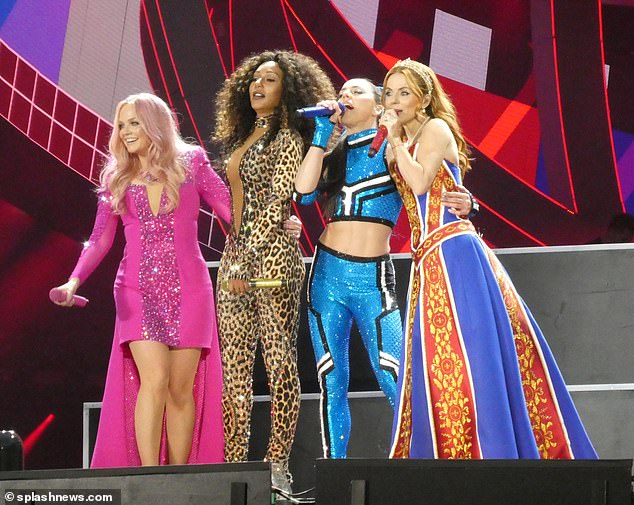 Sensational: Many of the band’s looks paid homage to their 1990s glory days, as they delighted 58,000 fans with their show

If you don’t think exactly what we need in these drear times are four star-spangled, semi- retired popettes getting their rocks off and their chicas to the front, then you, sir, are very much mistaken.

Scary, Sporty, Ginger and Baby put on a show that was greeted with raptures by around 70,000 fans, a crowd who did not quite fill the giant sporting stadium.

Still, there was no shortage of atmosphere and it was a right craic that so many of them came dressed as their favourite Spice Girl. Dearie me, I haven’t seen so many girls with their hair in bunches since fourth form netball practice.

With a drum-heavy backbeat, the group opened with Spice Up Your Life, a simple plea to the powers of positivity, that had everyone on their feet from the get go.

Watching them dance and sing up there on the giant stage, they seemed both ageless and powerful.

Each wore a pimped-up version of their original outfits, all of them drenched in a carpet of Swarovski crystals.

Scary was in her leopard print cat suit, Sporty was in sequinned athletic wear, Ginger was in a full-length Union Jack-style dress (plus tiara!) while Baby glowed in pink, as always.

There was the occasional dullish filler in their 23-song set, but that was hardly surprising given that only around half a dozen of their songs were quantifiable hits in the first place.

Their voices were never their strongest point, although it somehow didn’t matter. 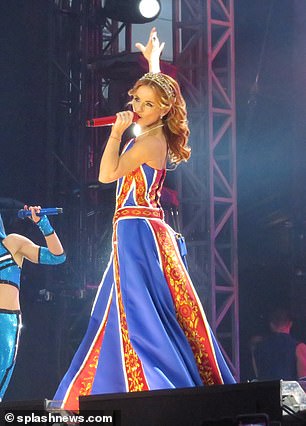 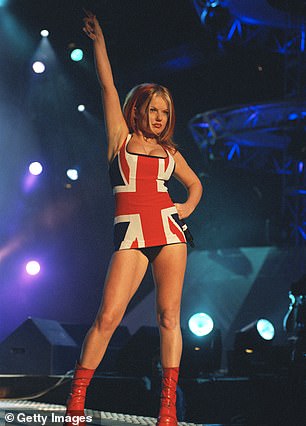 New look: Geri opted for a Renissance-style gown for the performance, after refusing to wear her famous Union Jack mini dress for the tour (right in 1997)

The Spices were always about the beauty of pure pop, and when they were being their very best selves, they were marvellous.

Is it time to address the invisible Posh-shaped elephant in the room? For the Spice Girls are back together but not quite. Four of them were giving it their all onstage last night, but Posh Spice was missing.

Victoria Beckham declined to take part in the tour because do you know what? She wants a reunion like she wants a new bunion.

Look. She’s washing her hair. She’s reading a comic. Don’t ask again, she is not signing up. In the Facebook of her mind, she unfriended the rest of them years ago.

And surely as reunions go, this one is like the Beach Boys without Brian Wilson. No? Well perhaps the Banana Splits without Fleegle, a hand without a thumb, the Simpsons without Marge.

It is a shame, because darling Posh just does not know what she is missing.

The Spices have tried reunion tours before, but this time they seem to have crested the nostalgia wave at its peak.

If Croke Park is anything to go by, the affection and love that this pop group still command is something to marvel at and cherish.

Their core fans seem to be women who were Spice fans when they were little girls, a generation who first came across the concept of feminism and the joy of female friendship through girl power. 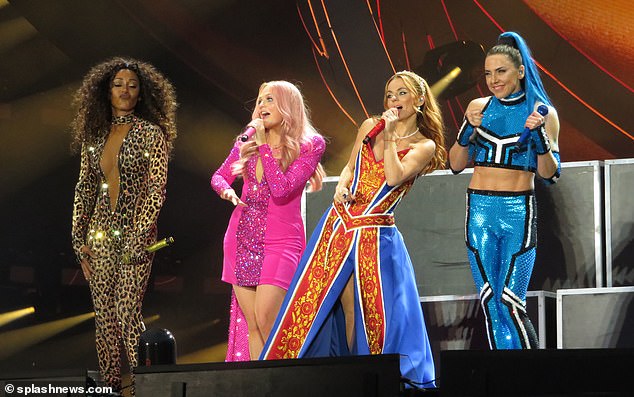 Amazing: Fans couldn’t hide their delight as the band finally returned to the stage, seven years after their last group performance at the 2012 Olympics

In their personal lives, the Spice Girls themselves have had their ups and downs, their issues and their tissues.

Their musical careers never really moved on, nor flourished independently since their 1990s heyday.

So let’s be honest. This was a celebration of that Spice twinkling in pop history but it also said something about collective endurance.

Desperation, some critics might say, but not me. For I was caught up in the moment.

It was oddly wonderful to see them up there, every fabulous inch of them, bathed in the golden spotlights as they thrashed through their mediocre back catalogue with something verging on the ferocious. Survivors, every one. Posh, you were not missed.