As many as five million women in the U.S. have Polycystic Ovary Syndrome (PCOS). Megan Stewart is one of them. This hormonal disorder impacts fertility, and side effects can include irregular periods, acne, obesity, and excessive hair growth. And that hair can grow in coarse and dark, popping up on the face, chest, and back. But Megan has found a solution that works for her that might work for you too—laser hair removal. 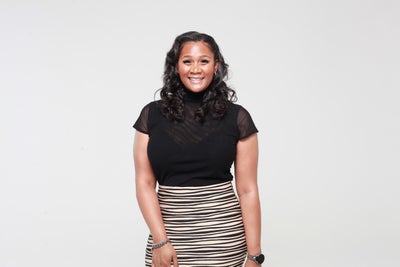 At age 9, Megan started showing signs of PCOS. She was gaining unexplained weight, feeling depressed and moody, had no menstrual cycle, and was growing hair on her face and neck. “I remember my mother taking me from medical professional to medical professional trying to figure out what was wrong with me,” says Megan. “Some doctors said it was normal, some said I just needed to lose weight, and one even said it was all in my head.” Finally, at the age of 16, she was diagnosed with PCOS and she started to find ways to treat the side effects, especially the hair growth.

After years of failed electrolysis, Megan says that something had to be done. “My hirsutism was also causing hyperpigmentation and it was embarrassing,” says Megan. Her non-profit, PCOS Awareness Association, partners with Milan Laser, so she wanted to give it a try—but she wasn’t sold just yet. “To be honest, my feelings before were: ok, here we go again, I hope I am not going to pour money into this as I have in razors, tweezers, creams, electrolysis, waxing, and more,” she says. “But the team at Milan provided me with so much information and created a plan for me. I noticed that in the days after my first session, I was getting ready to do my at-home hair removal routine but looked in the mirror and there was no hair to remove!”

“You can have the smooth, hair-free skin you’ve been wanting”, says Dr. Shikhar Saxena, CEO of Milan Laser Hair Removal. “Our lasers are much less painful than electrolysis. With each laser pulse, our laser uses a cooling spray to safely cool the skin and decrease discomfort. Most clients describe the sensation similar to the feeling of being snapped with a rubber band.” Milan Laser Hair Removal specializes in laser hair removal on brown skin and each treatment is performed by a medical professional. With over 200 locations nationwide, Milan Laser is an accessible, safe and affordable choice for laser hair removal. 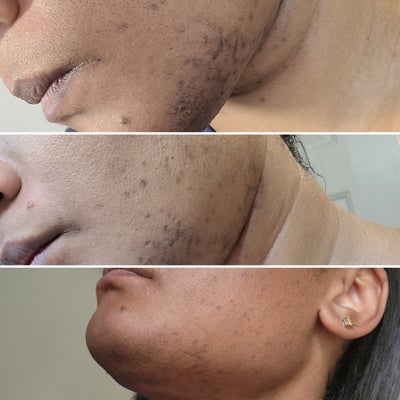 Megan has been having laser hair removal for a year now on her face, neck, underarms, and abdomen—and she’s thinking she may do her legs next! She tells us how her mother recently looked at her and started crying, saying, “your skin looks so good. I am so glad you found something that works after so many years of struggling.” Since she was young, she purposely worn long hairstyles to try to hide the hair and dark marks on her face and neck. “I recently called my hairdresser and told him I want to try a short cut; he was in shock,” Megan says. “The laser treatment has not only removed hair, but my hyperpigmentation has also been reduced significantly!”

One of the many things Megan loves about Milan Laser Hair Removal is that you pay for one package, and it is for life—with more than 200 locations and growing. “Let’s say five years from now if I am in Atlanta or New York for a conference and I see an unwanted hair all I need to do is phone one of the local Milan Laser locations and pop in for a quick session,” says Megan. “It is that easy!”

When asked about PCOS, Megan believes awareness is key—and that’s why she is the Founder and Executive Director of PCOS Awareness Association. Untreated PCOS can lead to diabetes, heart disease, high blood pressure, and cancer. “It is also important to recognize that PCOS presents itself differently in each woman—my friend’s PCOS doesn’t look like my PCOS,” says Megan. “While there is no cure for Polycystic Ovarian Syndrome being aware of the different symptoms allow patients and medical professionals to individualize care and treatments.” Milan Laser’s unlimited package is the best choice for woman managing PCOS hair growth. If you you’re thinking about laser hair removal, Megan says, “go for it, it has changed my life!”

Book a free consultation and see why Milan Laser Hair Removal is Megan’s go to for smooth, hair-free skin.