JAMES MILNER has joked that Sadio Mane's furious row in Liverpool's win over Burnley was "reaction to me not getting subbed on".

The Reds star, 33, could be seen holding Mane back on the bench after he was taken off the pitch late on in the thumping 3-0 win at Turf Moor. 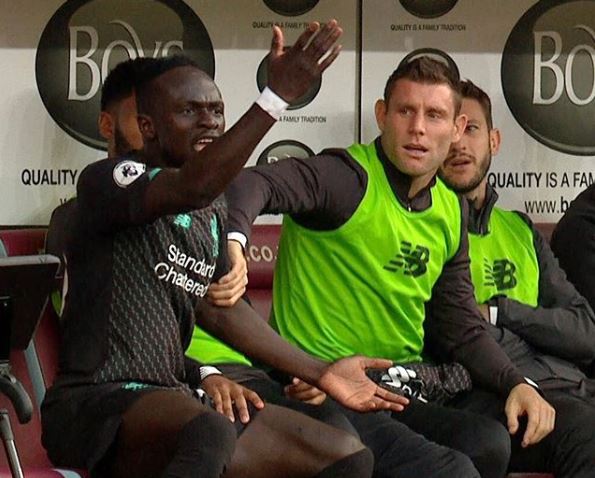 But Milner moved to defuse the tension by cracking a joke, with the Senegal winger irritated by Salah's "selfish" play.

The former Manchester City man captioned the picture: "Maybe I misread this, but I’m pretty sure Sadio was reacting to me not getting brought on #getmillyon #thanksmate".

Mane was absolutely furious on Saturday evening after Mohamed Salah failed to play him through, with the goal at his mercy.

Pundits quickly slammed the Egyptian winger, with Jermaine Jenas just one to call him "selfish".

But Liverpool boss Jurgen Klopp has revealed he won't be telling Salah to change his game.

“We can make these mistakes. You can lose the ball and miskick the ball, or sometimes you cannot see your team-mate.

"It is not that you ignore him. Sometimes to us it looks like you must see him, but you don’t."

While Klopp revealed he won't tell Salah to change – Reds captain Jordan Henderson even said he LIKED the fact they got into a heated exchange.

"I quite like that now and again. I think we need it.

“That’s just us pushing each other all the time. I think that’s important. We all want to do better, we all want to improve.

"But we’re really close and I think we can deal with that.

“I’m not sure what set him off to be honest. I couldn’t really understand at first, but then when he came in to the dressing room he was laughing and joking.

"The most important thing was we got the result, Sadio knows that. We want to push each other. We want to improve all the time."