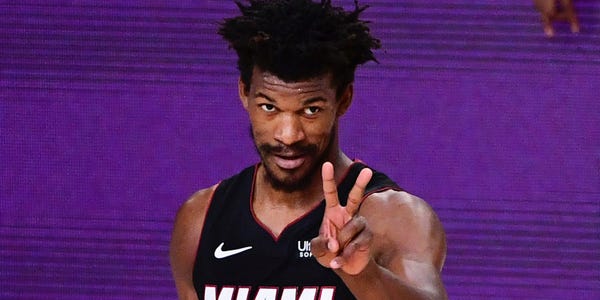 Jimmy Butler put together one of the all-time great performances in NBA Finals history on Sunday.

With the Miami Heat down 0-2 to the Los Angeles Lakers, Butler scored 40 points on 14-of-20 shooting to go with 11 rebounds and 13 assists to help the short-handed Heat get the win. He became just the third player in NBA history to record a 40-point triple-double in the Finals.

Butler cemented his place in NBA history and arguably proved he is among the NBA's elite after existing just outside of that space for much of his career. Butler has been an All-Star for years but is now proving he can be a No. 1 player on a title-contending team.

That Butler got to this stage at all is one of the most impressive and unlikely stories in the NBA.

Butler was homeless for a time while growing up

As Chad Ford reported for ESPN before the 2011 NBA Draft, Butler's mother one day told him: "I don't like the look of you. You gotta go."

At 13, Butler was kicked out of his house, with nowhere to go. Ford reported that Butler's father hadn't been in the picture since he was an infant.

Butler couch-surfed for years in Tomball, Texas, and had a reputation as a troublemaker. He often moved every few weeks.

A family took him in during high school

He told ESPN in 2017 that he doesn't think of himself as having been truly "homeless." He also avoids discussing his upbringing, telling Bryan Smith of Chicago Magazine in 2015 that he removed the rearview mirror in his car because he doesn't like looking back.

Going into Butler's senior year of high school, the Lamberts, a local family in Tomball with seven kids, took Butler in after becoming friends with their son. At first, Butler only stayed over a few nights a week, but they eventually agreed to take him in full-time if he did chores and improved his grades.

Though Butler was named all-district first-team after averaging 19 points and 8 rebounds per game his senior year of high school, he didn't receive interest from big schools. According to Ford, Butler's college prospects were hurt by not playing AAU basketball.

Butler ended up going to Tyler Junior College, about three hours north of Tomball. There, Butler drew national attention with a series of 30- and 40-point games. He led the team in scoring his freshman year.

According to Ford, by April of 2008, Butler had offers from Marquette, Kentucky, Clemson, Mississippi State, and Iowa State.

Michelle Lambert convinced Butler to choose Marquette because of its academic offerings.

Marquette coaches and players told The Athletic's CJ Moore that Butler was forced to do defensive drills repeatedly. He also worked with assistant coaches on finishing through contact, with coaches hitting Butler with pads and frustrating him.

"After a workout, he would say, 'Coach I'm quitting,'" assistant coach Dale Layer told Moore. "And I'd say, 'Jimmy, just come back tomorrow, just come back tomorrow' … Then he was about to quit again, and he said, 'Buzz is trying to run me up out of here.' I said, 'Yeah, because you're a good player, Jimmy, but you're not in shape, and you're not tough enough, and he's got to get the best out of you.'"

Butler averaged just 5 points in 19 minutes per game in his first year at Marquette. However, over time, he got into better shape, and things clicked for him.

During his second year at Marquette, Butler averaged 14 points and 6 rebounds in 34 minutes per game and became the program's most driven player.

"As his career unfolded, before practice, he would run over to me: 'Coach, you going to be soft today or you going to be hard?'" Williams told The Athletic. "'Jimmy, I've got it.' 'Oh, you're saying I got more energy than you today?' … He thrives on that. He would hold me accountable to that. 'You coach me today. You coach me as hard as you want today, Coach.' He said it, and he meant it. He wanted everything to be grueling. He wanted it."

Butler has been known as one of the hardest-working players in basketball ever since.

The Chicago Bulls took Butler with the 30th pick in the 2011 draft.

Butler's draft stock rose thanks to a solid senior season at Marquette, winning MVP at the Portsmouth Invitational, and strong pre-draft workouts. A scouting profile from ESPN even fairly accurately projected Butler as a smooth scorer, tenacious defender, and impactful player on the court. Despite that, he nearly fell to the second round to a team with many mouths to feed.

Butler's breakout didn't come until his fourth season in the NBA

Butler proved himself to be a useful 3-and-D wing over the first three years with the Chicago Bulls, but he was largely overshadowed by players like Derrick Rose, Luol Deng, Carlos Boozer, and Joakim Noah.

However, in 2014-15, Butler exploded, averaging 20 points, 5 rebounds, and 3 assists per game en route to winning Most Improved Player and making his first All-Star team. Butler suddenly showed he could create his own offense and be the No. 1 option on a good team.

Brilliantly, he turned down a four-year, $44 million extension from the Bulls before the season. He instead signed a five-year, $95 million contract the next offseason.

Butler bounced around, failing to find a home

Butler looked in danger of becoming a journeyman who never lasted anywhere long.

After a failed re-tool around Butler, the Bulls traded Butler to the Minnesota Timberwolves in 2017. Butler played less than two seasons, demanding a trade after just one year. He famously dominated a Wolves scrimmage in training camp after asking for a trade, shouting, "You f—ing need me" to management along the sidelines.

Butler was traded to the Philadelphia 76ers during the 2018-19 season. He immediately made headlines for challenging head coach Brett Brown in a tense meeting.

The marriage didn't last long. Though Butler played well in Philadelphia, the Sixers were eliminated in the second round of the playoffs. Butler hit free agency and was not brought back. There has been mixed reporting as to whether the Sixers did not want to re-sign Butler, or if Butler refused to re-sign with the Sixers.

He joined the Miami Heat in free agency, via a four-team sign-and-trade, signing a four-year, $140 million contract with the Heat. Some teams reportedly balked at the idea of giving Butler, who turned 31 in September, a max contract.

Butler and the Heat have become a match made in heaven

After the Heat's Game 3 win in the Finals, head coach Erik Spoelstra told reporters that Dwyane Wade had firmly told Spoelstra and team president Pat Riley that Butler was "the guy" to lead Miami.

Butler's devotion to working hard and eschewing nonsense has fit in perfectly with Miami's hard-nosed culture. In August, ESPN's Brian Windhorst wrote that the Heat have never fallen as hard for a player as they have for Butler.

The Heat still face an uphill battle against the Lakers, but even if they don't win another game in the series, Butler has proven to the basketball world that he's a full-blown superstar, even if he took an unconventional route to get there.

Rival graffiti artist insists Nottingham mural is HIS, not Banksy's Saudia airliner came within 100 feet of smashing into drone The English Premier League’s best defender could miss the rest of the season after a horror tackle, and it has turned the race for the title on its head