Home » TV & Movies » Q&A: Bill Shorten utters the most powerful and personal sentence of the campaign

Q&A: Bill Shorten utters the most powerful and personal sentence of the campaign

He spent most of this solo outing doing what he did at this precise moment in the 2016 campaign – armed with a clear strategy to have a go at host Tony Jones at every opportunity, when he wasn’t answering questions. 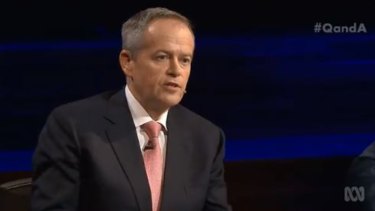 Bill Shorten had a solo appearance on Q&A on Monday night.Credit:ABC

Viewers will disagree on the rightness of the strategy – according to the Twitter stream, Jones was either a rampant fascist, a Labor stooge or completely incompetent – meaning Jones was, in the increasingly rare parlance of the sane, just doing his job.

It seemed to work for Shorten last time and it worked this time to a degree, though at times the potshots at the host appeared contrived. Memo Bill: you can roll your eyes and deliver variations on “Oh God” only so many times before one thinks it's been drilled into you.

Relentless media training aside, there did come what seemed a significant point at the end, and it was allowed to run unhindered.

Shorten could have answered the final question any which way, but he landed on a genuine moment.

The question was about “a failure in leadership culture, in human decency and human kindness, especially in caring for the vulnerable”.

The questioner, Kathryn Watt, asked: “What will your leadership culture be? How will your government guide all of us as a community in relation to our culture in being a decent and caring country to live in?”

Shorten took on his lack of Whitlam, Hawke and Keating-like qualities head on – bluntly, and surely wisely.

So far, so much cliche.

But he went on, referring to the Q&A venue for the night, Melbourne’s Monash University.

His late mother, Ann, went to the same uni, and worked there as teacher for 33 years.

“She was the first in our family to ever go to university … she wanted to be a lawyer, but she was the eldest in the family and needed to take the teacher scholarship to look after the rest of the kids. My mum was a brilliant woman. She wasn't bitter. She worked here for 35 years. But I know if she had other opportunities she could have done anything. 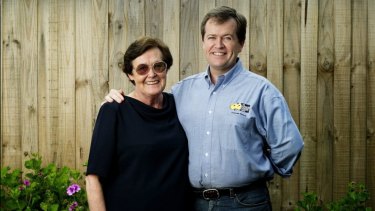 Bill Shorten and his mother Ann, pictured in 2005.Credit:John Donegan

For the average viewer, it was perhaps the most powerful and personal sentence uttered in the campaign.

Rehearsed? Who knows. Used in 100 town halls before this? Let me know. It worked, and it worked in front of a national television audience.

Which brings us to the ghost hanging over Monday’s program: Scott Morrison.

In his preview of Monday's show, Jones opened with: “Bill Shorten’s here. Prime Minister, where the bloody hell are you?”

The Prime Minister had earlier on Monday told Q&A he would not be fronting for a solo appearance during the campaign, no matter when or where it made itself available.

This gave Shorten the opportunity to zing his opponent like this: “At least I’ve turned up. I’m happy to have ScoMo here. I’m trying my best.”

And also for him to wonder of one-time Q&A darling Malcolm Turnbull: “The Sun King … anyway, he’s probably watching this from New York, isn’t he?”

Yet why, one questioner wondered of the Labor leader, was he so unpopular?

In summary: Scott Morrison – PM for 264 days – might want to rethink his Q&A availability.