Amber Heard is attempting to escape the spotlight by living under a pseudonym in a luxury villa in Mallorca, according to Spanish press reports.

The 36-year-old actress is said to be renting the multi-million-euro mansion from the family of Maria Antònia Munar, a local politician who was sentenced to 14 years in prison for corruption in 2013 but released early in 2020.

The property, built in 2020, is in the historic centre of the small rural town of Costix, which is located in the centre of the Spanish island.

Ms Heard is thought to have made the move to Mallorca, along with her baby daughter Oonagh Paige and her partner, cinematographer Bianca Butti, a few months ago – just after she lost a U.S. defamation case against her former husband Johnny Depp, who was awarded $10million in damages, in June.

She rented the property under the pseudonym of Martha Jane Cannary, better known as Calamity Jane, the 19th century American frontierswoman.

And while locals say they recognised the Aquaman star immediately, it appears that she is largely left to her own devices while she walks around the town in casual clothes and wearing a baby carrier. 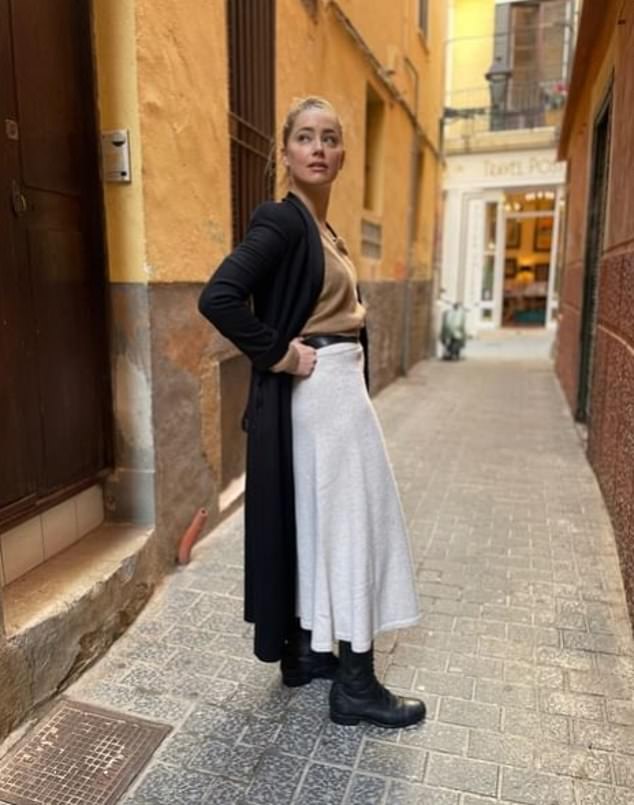 Amber Heard has escaped the spotlight and is living under a pseudonym in a luxury villa in Mallorca. Pictured: Ms Heard in Palma, Mallorca in January 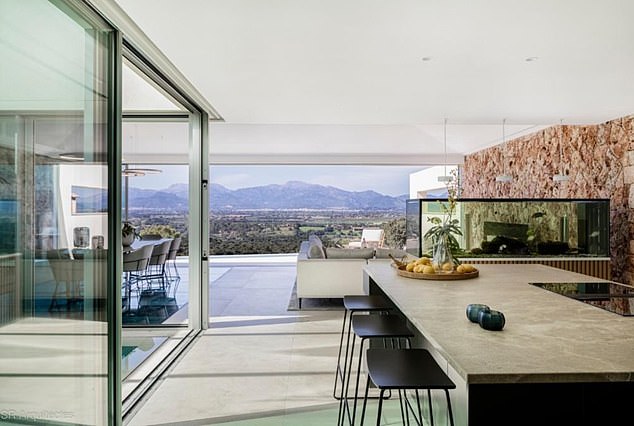 One local shopkeeper, Miguel, told El Mundo that his wife ‘recognised her right away’, but no one said anything because people in Costix, a town of just 1,270 inhabitants, ‘don’t bother anyone’ and just ‘live and let live’.

The grocer added: ‘She is like anyone else, she buys fruit and vegetables, she speaks Spanish with a Mexican accent and she’s very polite. She always says good morning to us.’

The actress appears to spend her days taking her daughter to the playground, where locals say she talks to other parents, and undoubtedly enjoying the luxuries of her her 479 square-metre rented mansion.

The modern-looking villa, with huge floor to ceiling windows, also has an infinity pool with stunning views of the Tramuntana mountain range. 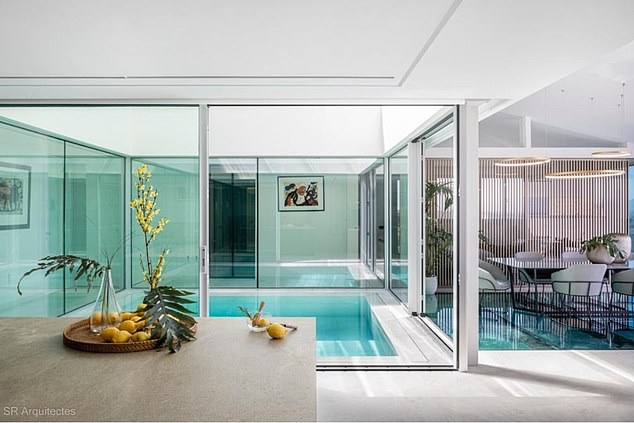 Ms Heard is said to be renting the 479 square-metre mansion from the family of Maria Antònia Munar, a local politician jailed for 14 years for corruption 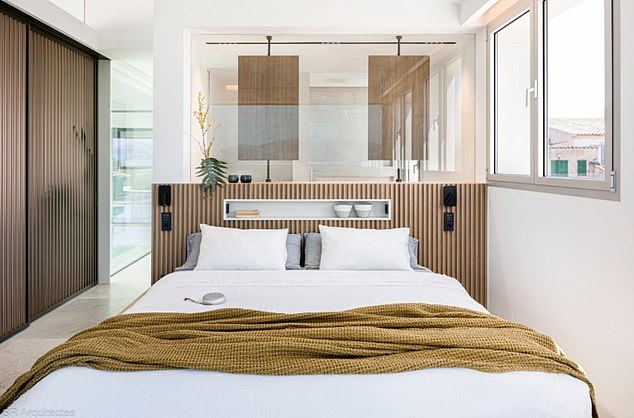 It was put up for sale for €2.8million euros earlier this year but has been taken off the market since being rented by Ms Heard

It was put up for sale for €2.8million euros earlier this year but has been taken off the market since being rented by Ms Heard. It is not clear how much she will be paying for her Mallorcan retreat, while the compensation she owes to Mr Depp still hangs over her head and Hollywood continues to turn its back on her.

It is not the first time that the actress has hidden away from the spotlight on the Balearic Island.

In January she posted a picture on Instagram captioned ‘Hola Madrid!’ which astute viewers realised was in fact taken in Mallora as the manhole cover was inscribed with the word ‘Palma’, the island’s capital city.

Ms Heard was spotted on a rare public outing at a beach near the city earlier this week. 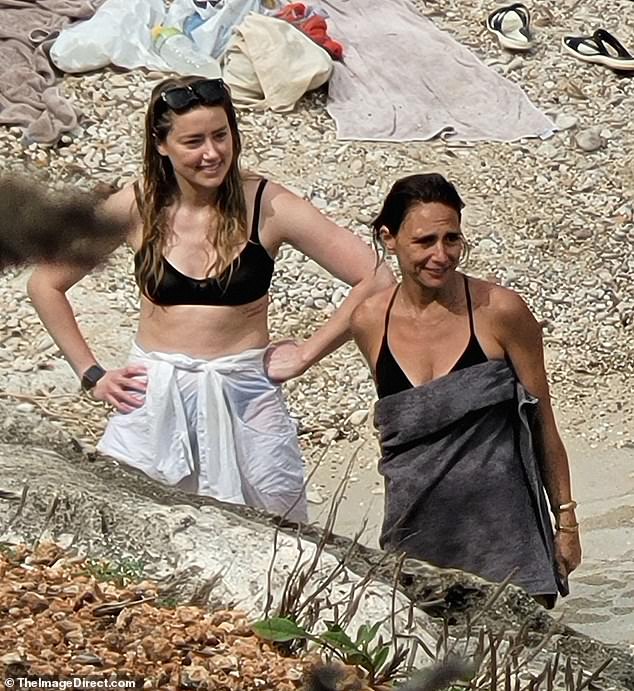 Wearing a black bikini and semi-sheer white skirt, the 36-year-old beamed with her hands on her hips as she visited a public beach, nestled between tall, rocky cliffs.

The day before she was photographed on a trip to the park with her one-year-old daughter, who was wearing a green floral jumpsuit and pink trainers.

The sightings come amid her seemingly never-ending battle with Depp. Just this week, Amber changed lawyers yet again in her attempt to force two insurance firms to pick up the multimillion dollar bill for her libel payout.

The recently hired Kirk Pasich claims that Heard’s expenses soared over $8million before the Virginia trial even began. Heard’s team appears to want homeowner’s insurance to cover those bills. 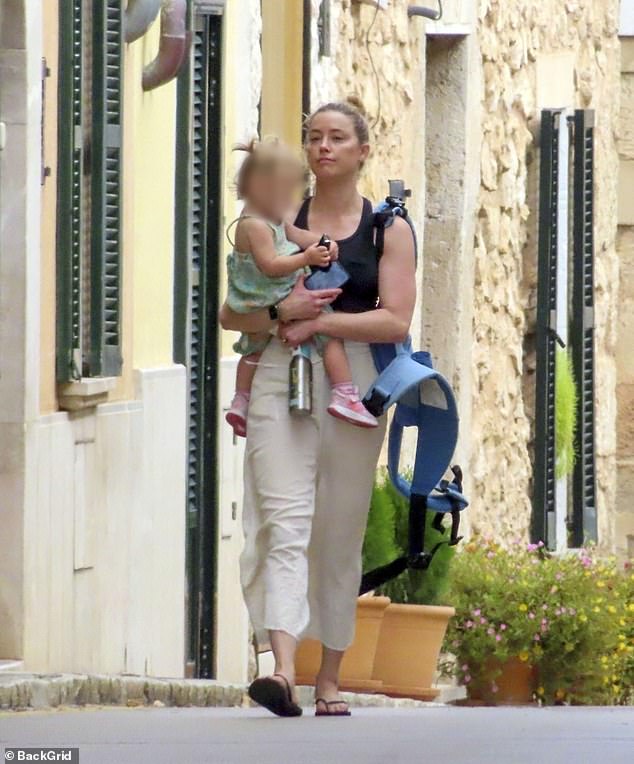 Ms Heard was also photographed on a trip to the park with her one-year-old daughter, who was wearing a green floral jumpsuit and pink trainers

In March 2019 Johnny Depp sued his ex-wife, Amber Heard, for $50million after she wrote an opinion piece for The Washington Post in 2018 saying she was abused by the Pirates of the Caribbean star. However, she never explicitly named Depp in the piece but wrote that she is ‘a public figure representing domestic abuse’.

In February 2020 audio recordings obtained by DailyMail.com, revealed Heard admitting to hitting Depp. ‘I f**king was hitting you… I don’t know what the motion of my hand was, but you’re fine, I did not hurt you, I did not punch you, I was hitting you,’ Heard said.

In January 2021  Heard countersued her ex-husband for $100million.

On April 11, 2022 the six-week trial kicked off in Virginia to discuss the abuse allegations made throughout the couple’s relationship. The pair married in 2015 but divorced in 2017.

On April 20, 2022 Heard admitted to getting violent with Depp as audio recording of the actress were played.

On May 4, 2022 Heard took the stand to recall romance with Depp before he allegedly abused her. The actress said the abuse dated back to 2013 when Depp allegedly sexually assaulted her.

On May 25, 2022 Depp testified again and claimed Heard’s allegations were false. He claimed he never abused his ex-wife.

On June 1, 2022 Depp won the defamation case against Heard subjecting her to pay The Pirates of the Caribbean star $10.3million. The jury awarded Heard $2 million after Depp’s attorney said Heard and her friends trashed her apartment before calling police.

On July 21, 2022 Heard appealed the judge’s decision in her defamation case against Depp – two months after she was subjected to pay $10million to her ex-husband in damages.

On July 22, 2022 Depp filed an appeal against his conviction for defaming Heard after calling the domestic abuse claims against him a ‘hoax’ – subjecting him to pay his ex-wife $2million.