A B&M shop has been evacuated in Derby after armed police officers rushed to the scene of a reported shooting.

Witnesses heard ‘six gunshots’ as they were evacuated when officers arrived on a Farm Foods car park, DerbyshireLive reports.

Ambulances have arrived at the scene, but there are no reports of any casualties at this time.

An air ambulance landed in Gosforth Road, off Ascot Drive, at around 10.30am.

There are a number of police vehicles at the scene and Ascot Drive has also been closed.

Reports at the scene suggest there are around seven or eight police cars with traffic being prevented from coming down the closed road.

The police station is nearby and officers confirmed that a man has been taken to hospital.

A spokesperson said: Officers are currently in attendance at an incident at #AscotDrive police station in #Derby. #AscotDrive is currently closed, and a man has been taken to hospital.’ 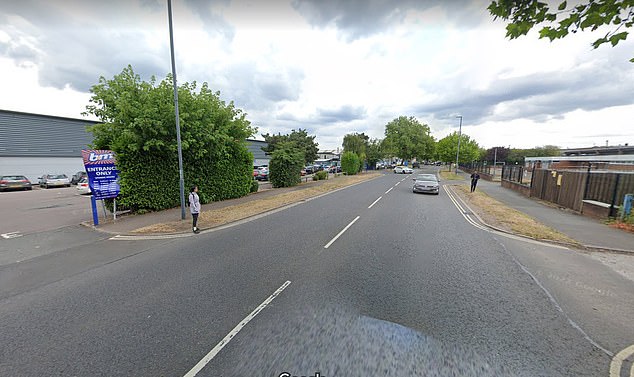 B&M, on Ascot Drive (pictured), Derby had to be evacuated following reports of a shooting in the area

Derbyshire Police, whose station is nearby, confirmed that a man has been taken to hospital

One individual said that they heard ‘gunshots’ which sounded like ‘a load of beer barrels falling off a lorry’.

Meanwhile, Emma Smalley, 28, who was shopping in B&M at the time, said: ‘We heard about six massive bangs and didn’t know what it was at the time. Everyone got evacuated. I’ve had to leave everything in there.

‘I just thought it was banging. I didn’t know whether it was a delivery for B&M or someone in the warehouse. It was noisy.’