‘This has been a painful birth’: Campaigners hail France legalising IVF for lesbians and single women after long political fight with hopes the first children could be conceived by the end of the year

France has passed a law that will allow lesbians and single women to get in-vitro fertilisation for the first time, which is currently reserved for heterosexual couples.

The law, presented by French President Emmanuel Macron’s government, was approved by the National Assembly in a 326-115 vote on Tuesday, allowing single women and lesbians access to medically assisted reproduction.

The move had been long-awaited by LGBTQI+ rights groups, who have been pushing for the reproduction measure since France legalized same-sex marriage in 2013.

The wide-ranging bioethics law will expand access to fertility treatments such as artificial insemination and in vitro fertilization (IVF), currently reserved only for infertile heterosexual couples. 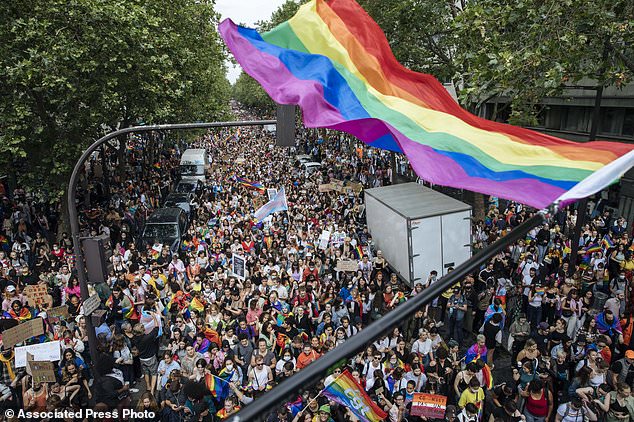 France has passed a law that will allow lesbians and single women to get fertility treatment for the first time. Pictured: Crowds at the annual Gay Pride march in Paris, France, on Saturday

Health Minister Olivier Veran said French authorities are getting ready to apply the new law as quickly as possible, so that the first children could be conceived by the end of the year.

Medically assisted reproduction is widely available to all women in 10 European countries including Britain, Spain and Belgium, but in France it has for years fed into a broader debate about gay rights and the commercialisation of healthcare.

‘We’re here to vote on a law underpinned by freedom, equality, solidarity and dignity,’ Coralie Dubost, a lawmaker from the ruling La Republique en Marche party, told the assembly.

The measure is part of a broader bioethics bill that also ends anonymity for sperm donors, who will have to agree to having their identity revealed if their children ask to know their biological father when they turn 18.

But the new law does not address France’s ban on surrogacy arrangements, in which a woman carries and delivers a baby for someone else.

The vote marks the end of a two-year debate in parliament. The conservative majority in the Senate repeatedly rejected the measure, but the lower house of parliament, where Macron’s centrist party has a majority, had the final say. 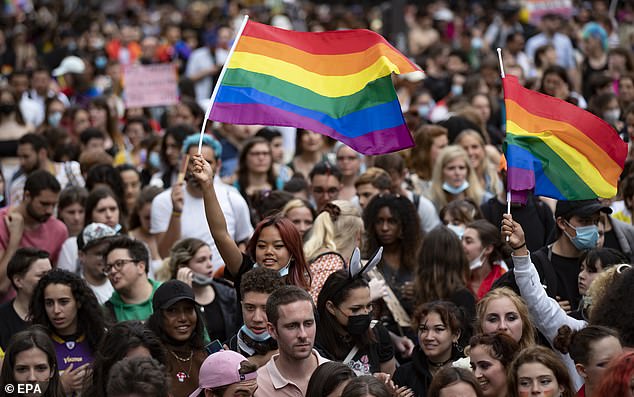 The law will expand access to fertility treatments such as artificial insemination and in vitro fertilization (IVF). Pictured: Annual LGBTQI+ pride parade in Paris on Saturday 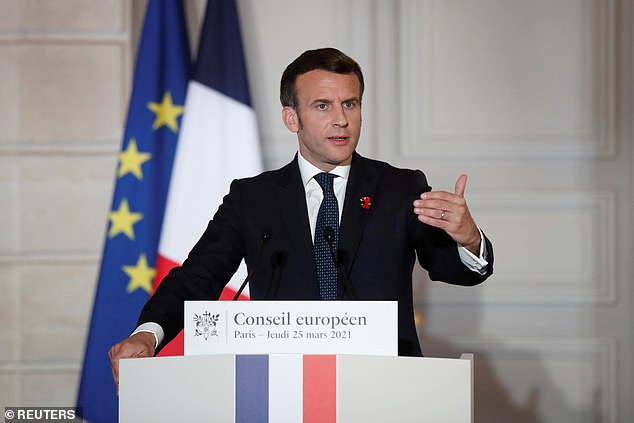 The law, presented by French President Emmanuel Macron’s government, was approved by the National Assembly in a 326-115 vote on Tuesday

Under existing French law, IVF is available only to opposite-sex couples, and only for reasons of infertility or the risk of transmission of a disease or medical condition to the child or either parent.

In France, fertility treatments are free but many women have previously gone to Belgium and Spain for treatment, which can be very costly.

Matthieu Gatipon, spokesperson of the Inter-LGBT association said, welcomed the ‘long-awaited progress’ after the law was finally passed in parliament.

‘We are satisfied that this is getting done… but this has been a painful birth,’ he said, expressing frustration that it took so long to get to the final vote of the law.

Gatipon said it has been hard on French women, who had to delay for years their plans to have a baby, and others who had to pay expensive fees to go abroad to countries where such procedures are available.

Armêl Balogog, a journalist who describes herself as bisexual and is in a relationship with another woman, welcomed the new law.

‘Let me tell you how much it means for me to live in a country where I can legally have a child with the woman I love,’ she tweeted after the vote. 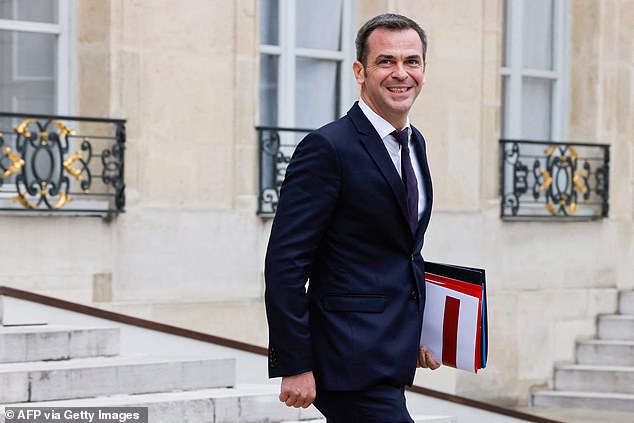 Health Minister Olivier Veran (pictured) said French authorities are ready to apply the new law as quickly as possible, so that the first children could be conceived by the end of the year

Balogog said only regrets that transgender people were ‘forgotten’ by the law.

The law did not meet demands that transgender women be allowed to donate sperm for use in fertility procedures before their gender reassignment.

Magali Champetier, a lesbian mother, told La Dépêche newspaper that her partner went to Spain to conceive two children and said the law comes as a ‘relief’.

‘I had to get married and wait a year before I could become the child’s legal parent. This [law] will remove that stress, and moreover the procedure will be free, unlike the treatment abroad,’ she said, according to the BBC.

An IFOP poll showed that two thirds of French people support the new legislation and many people took to Twitter to share their joy after the vote.

One person wrote: ‘Finally! France has done it! IVF for single women and same sex couples. Also funded by the government’

Another penned: ‘Some great news out of France! Merci.’ 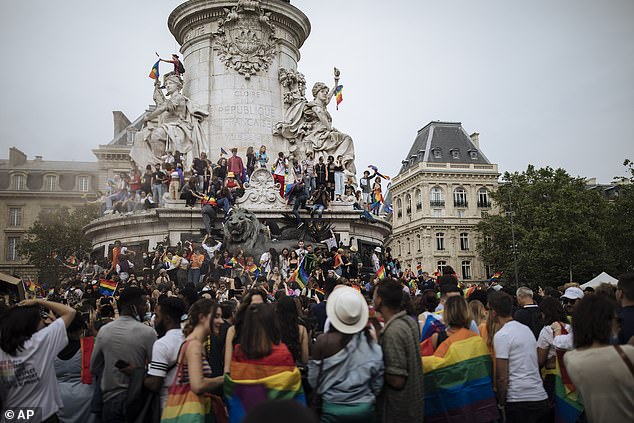 The move had been long-awaited by LGBTQI+ rights groups. Pictured: Participants dance on Republique square statue during the annual pride march in Paris

LGB Alliance tweeted: ‘We sometimes forget how far we have to go in securing LGB rights, even in relatively LGB-friendly countries.

‘Lesbian couples in France are finally to be entitled to IVF treatment. Dutch & many other EU lesbians acquired this right decades ago.’

One woman said: ‘My lesbian friends in France have had to travel to Belgium for IVF treatment so they can have a child – I was really shocked when I found out it was illegal in France.

‘Covid border closures have made it all a million times harder for them this last year too.’