Thousands of Hong Kong pro-democracy activists used torches, lanterns and laser pens to light up two of the city’s best-known hillsides on Friday night in an eye-catching protest alongside an annual festival.

Friday evening marks the start of the mid-autumn festival, one of the most important dates in the Chinese calendar, and is traditionally a time for thanksgiving, spending time with family and praying for good fortune.

But as Hong Kong convulses from more than three months of political unrest, activists used the night as a way to keep their movement buoyant with no signs of protests abating. 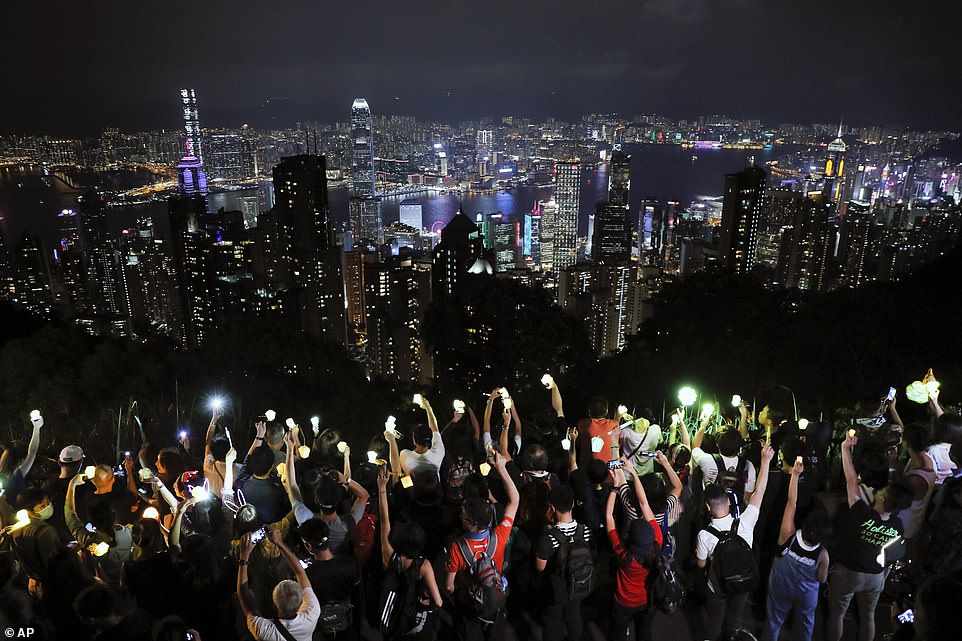 Demonstrators hold up the mobile phone lights as they form a human chain at the Peak, a tourist spot in Hong Kong on Friday 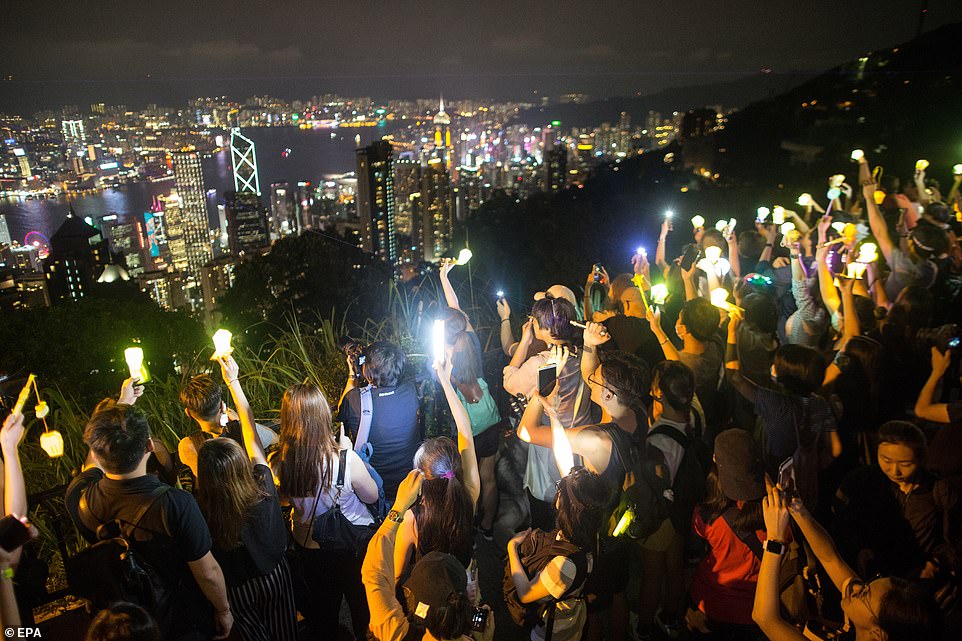 Friday evening marks the start of the mid-autumn festival, one of the most important dates in the Chinese calendar 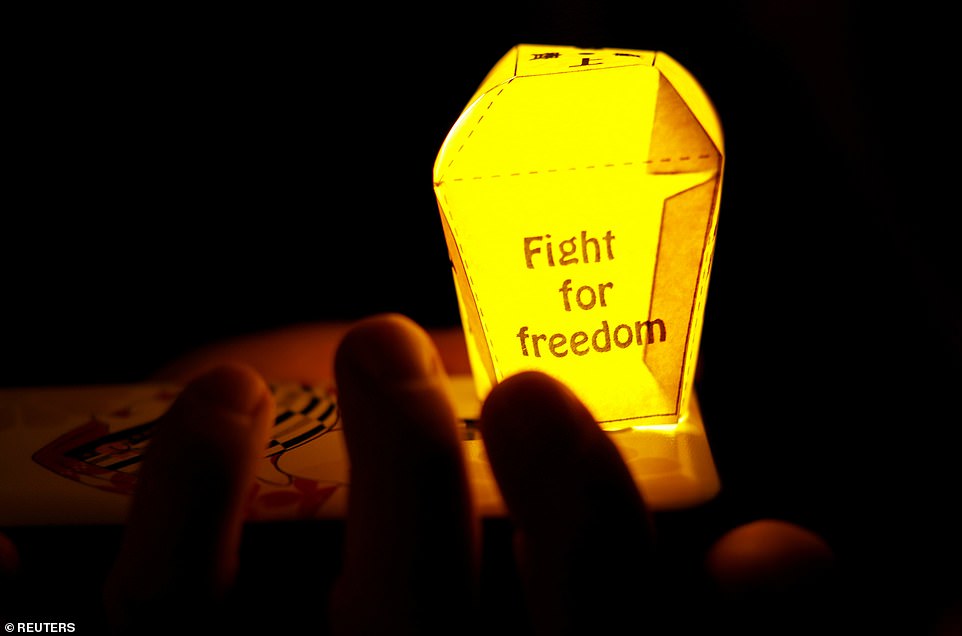 Protesters have gone creative and put slogans, such as ‘Fight for freedom’, on mini lanterns to distribute and carry around 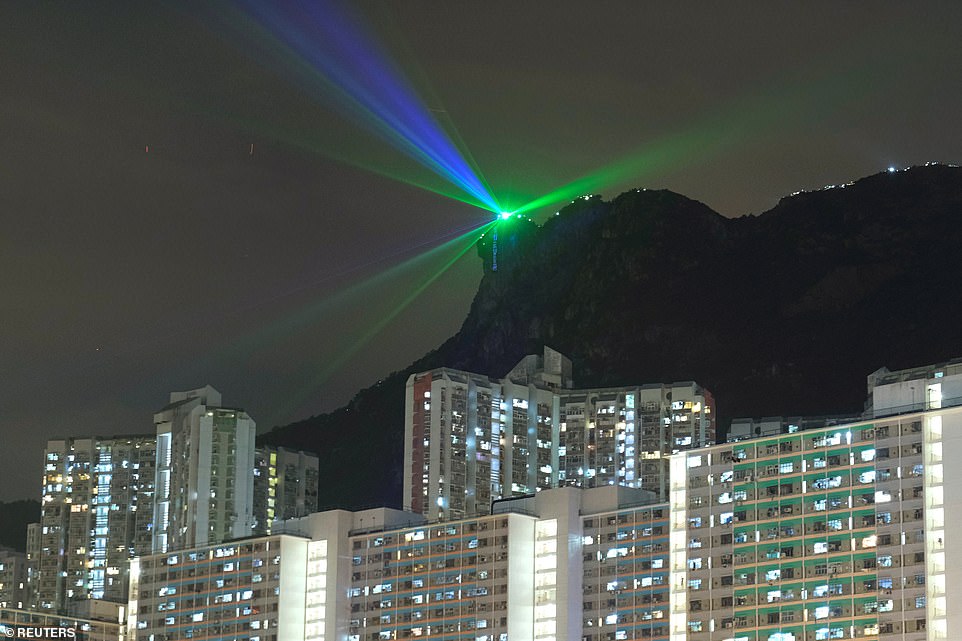 Throughout the evening thousands of activists with torches on their heads hiked their way up hill trails leading to the top of Lion Rock which overlooks the sprawling skyscrapers of the city’s Kowloon district, one of the most densely populated places on earth.

They also gathered to form a long human chain on the Peak – a popular tourist spot which offers picture-postcard views of the financial hub and its dramatic waterfront.

Both groups, whose lights were visible to each other across the harbour, chanted slogans and sang ‘Glory to Hong Kong’, an anonymously penned protest anthem which has gone viral in recent days. 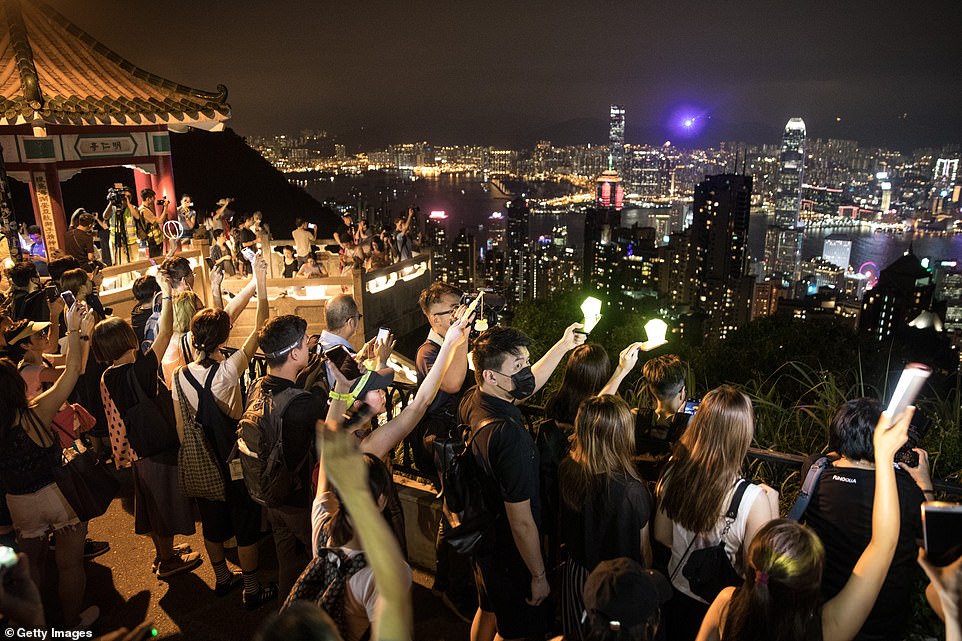 Pro-democracy protesters form a human chain and wave laser pointers, phones and lanterns in the air on Victoria Peak 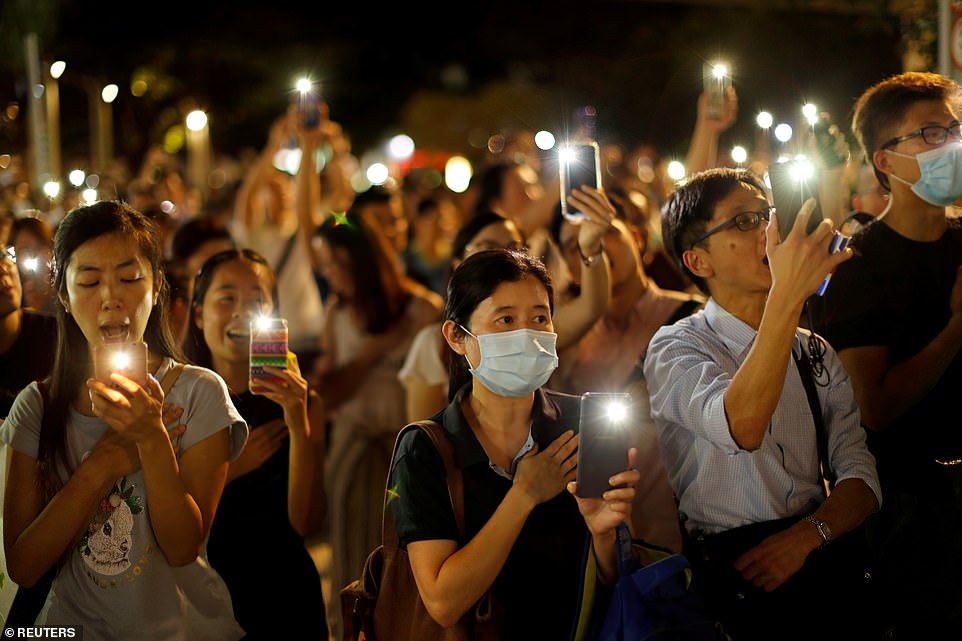 People flash their phones during a protest in Sha Tin on the mid-autumn festival, one of the most important Chinese festivals 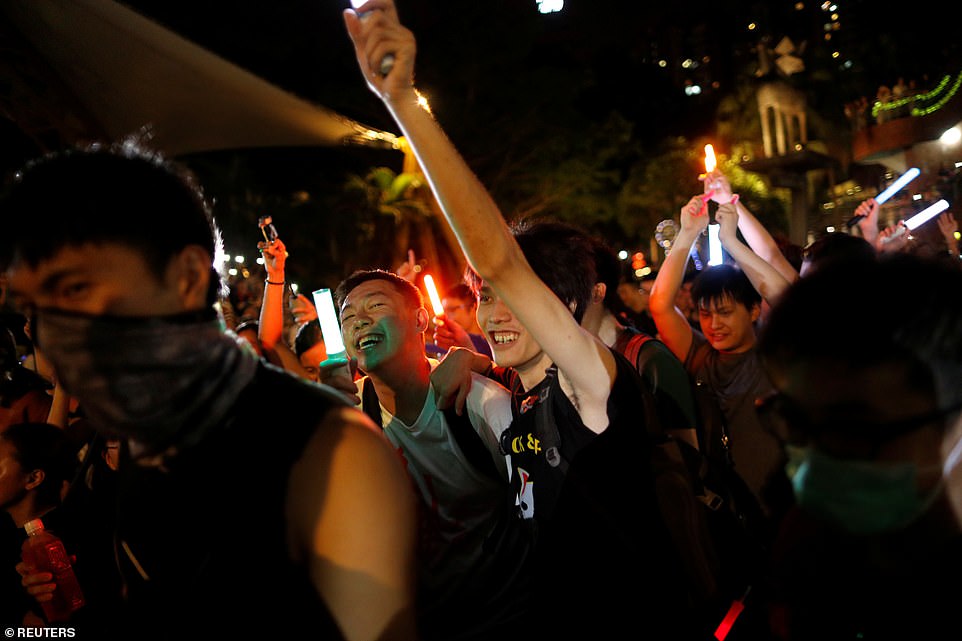 As Hong Kong convulses from more than three months of political unrest, activists used the night as a way to keep their movement buoyant. Participants of a protest in Sha Tin are seen holding up their phones and lights to advocate democracy 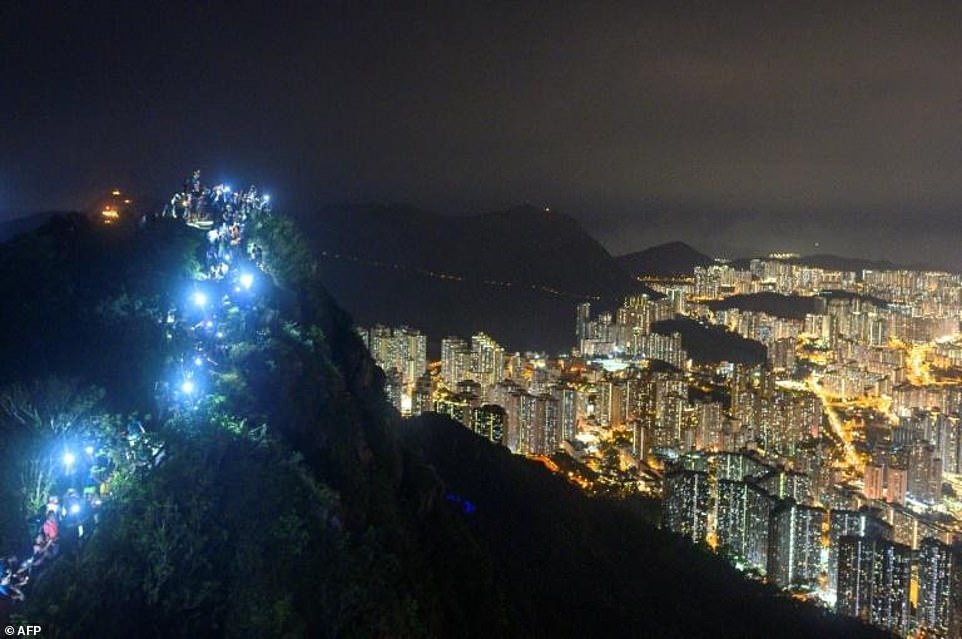 ‘Today’s autumn festival is a symbol of family and togetherness, so this is in the spirit of gathering the power of the Hong Kong people,’ a 24-year-old protester, who gave his surname Yip, told AFP as he sweated his way towards the top of Lion Rock in the unforgiving sticky evening heat.

‘We are going to fight with Hong Kong and fight for freedom,’ added another protester, who gave his surname Shum.

‘Me and my wife decided to walk up to show our sincerity to our government that we really want freedom,’ he said. 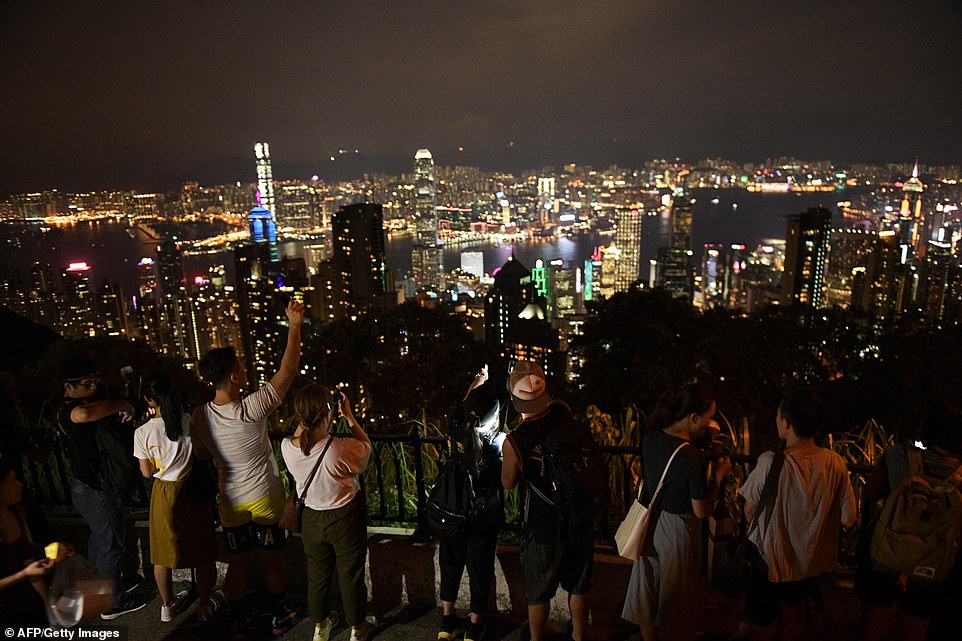 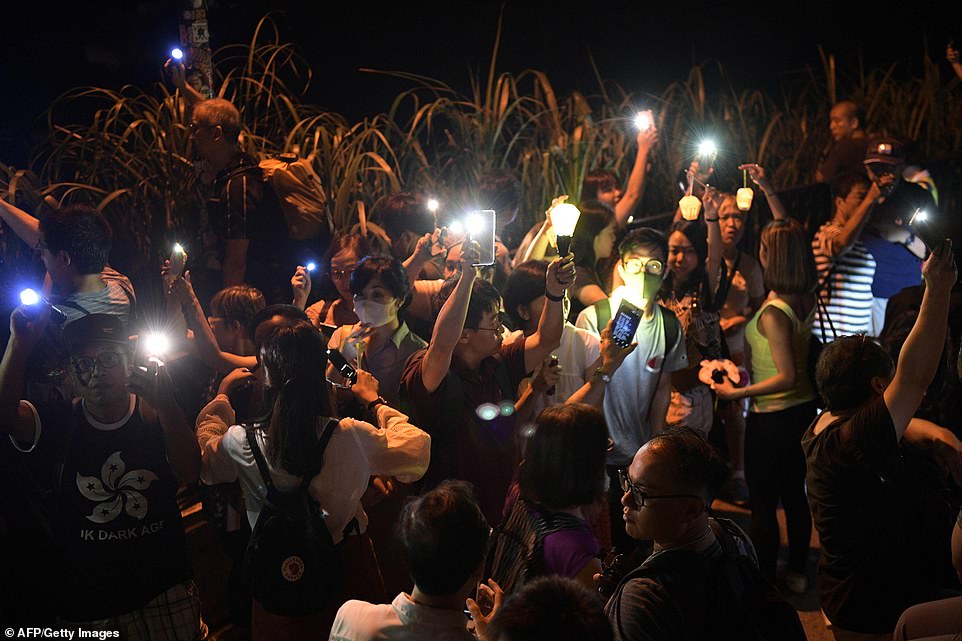 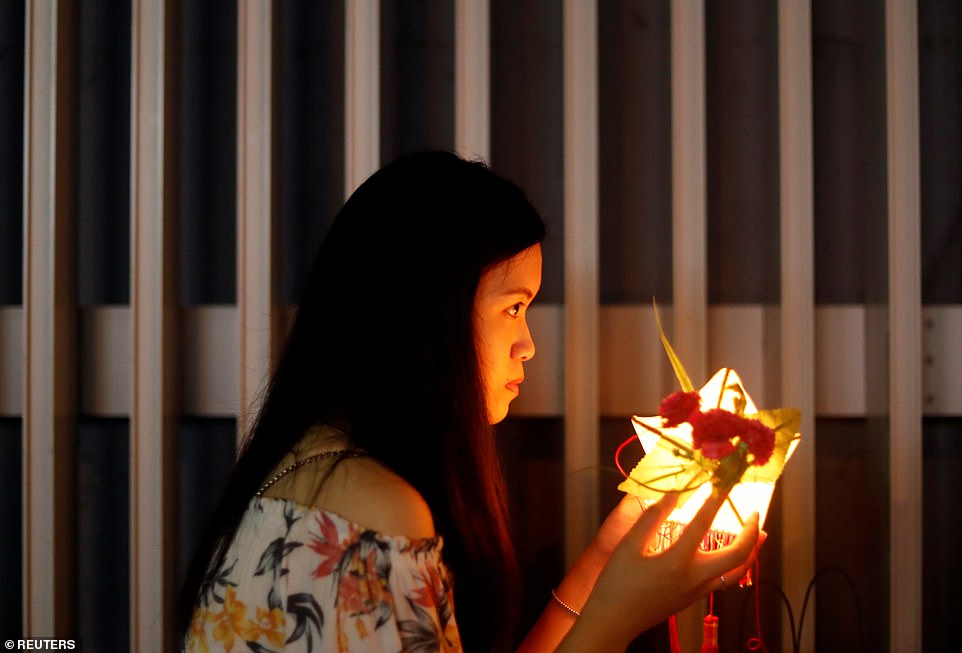 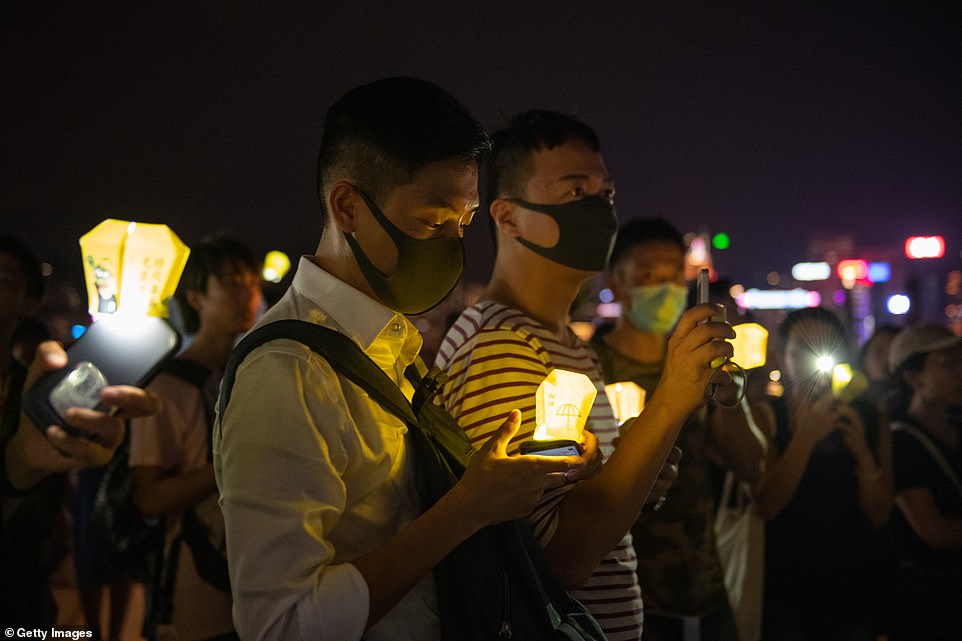 Hong Kong has been battered by nearly 100 days of protests, sparked by a now-abandoned plan to allow extraditions to the mainland.

After local leaders and Beijing took a hard line, the movement snowballed into wider calls for democracy, police accountability and a halt to eroding freedoms in what is the greatest challenge to Beijing’s rule since the 1997 handover.

But smaller groups of hardline protesters have fought increasingly violent battles with riot police and vandalised subway stations in scenes that have sent shockwaves through the once-stable financial hub.

The city is now deeply polarised with fights frequently breaking out between different political camps. 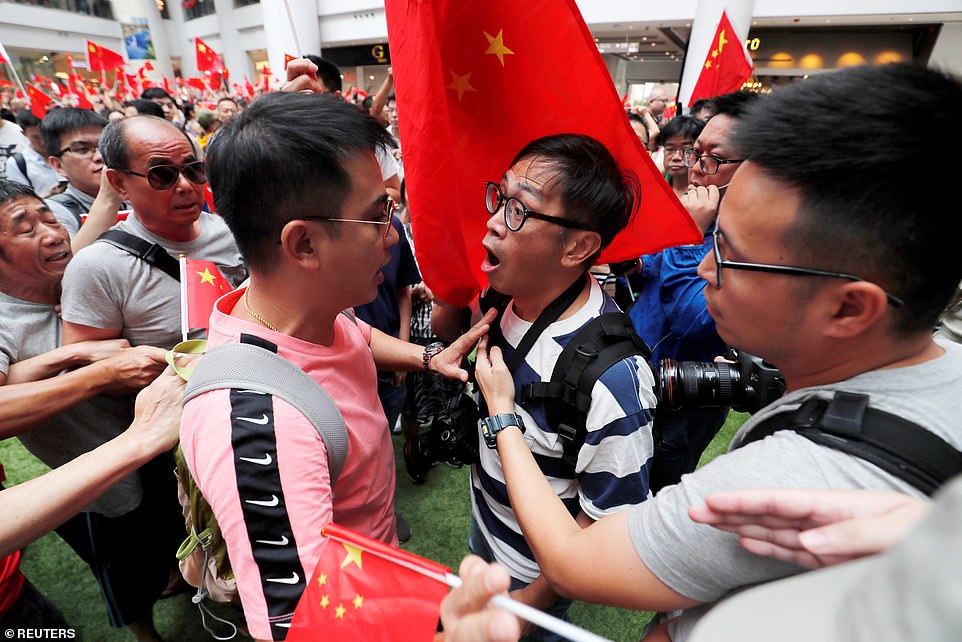 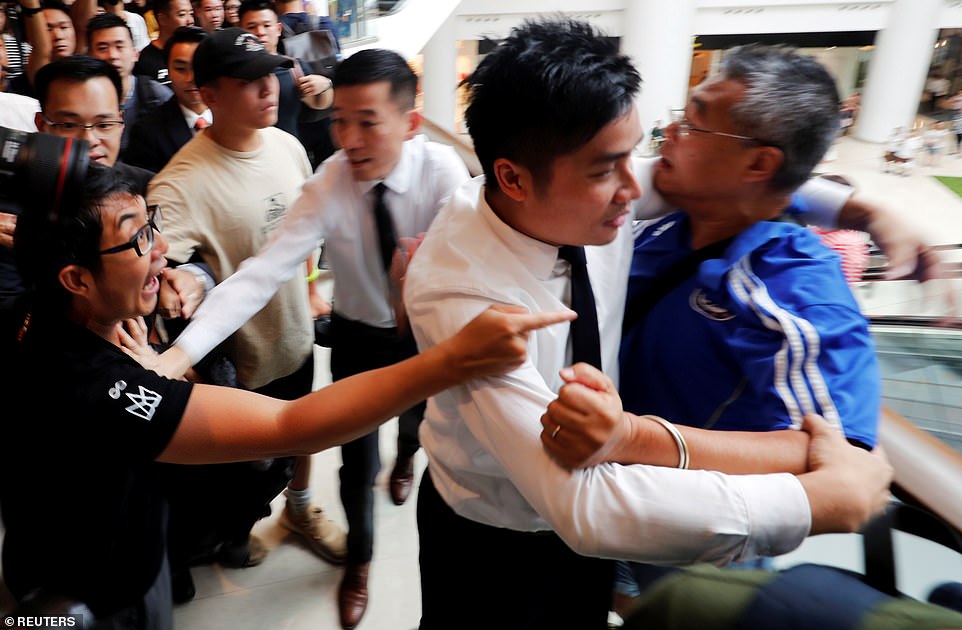 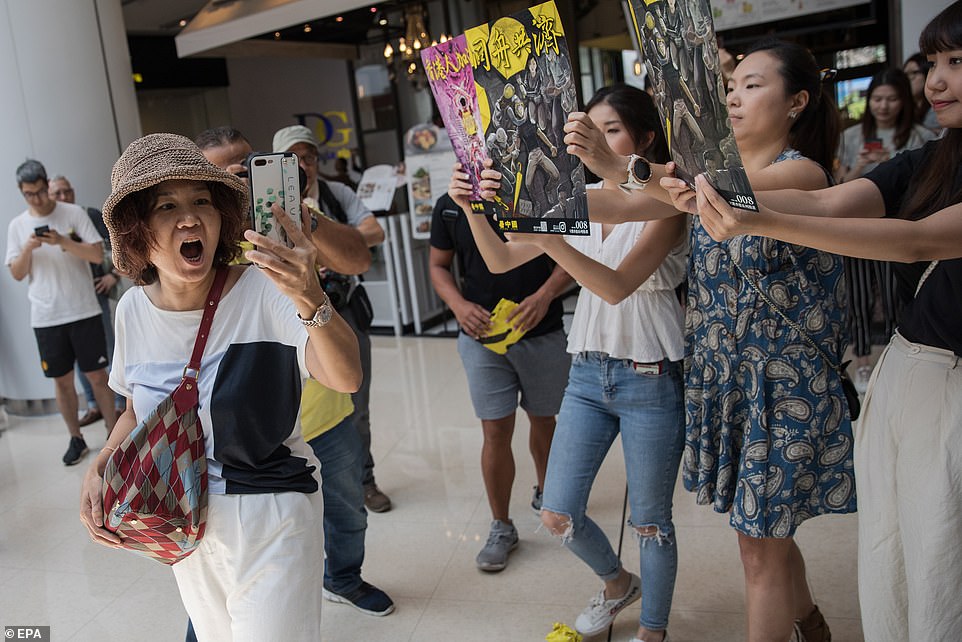 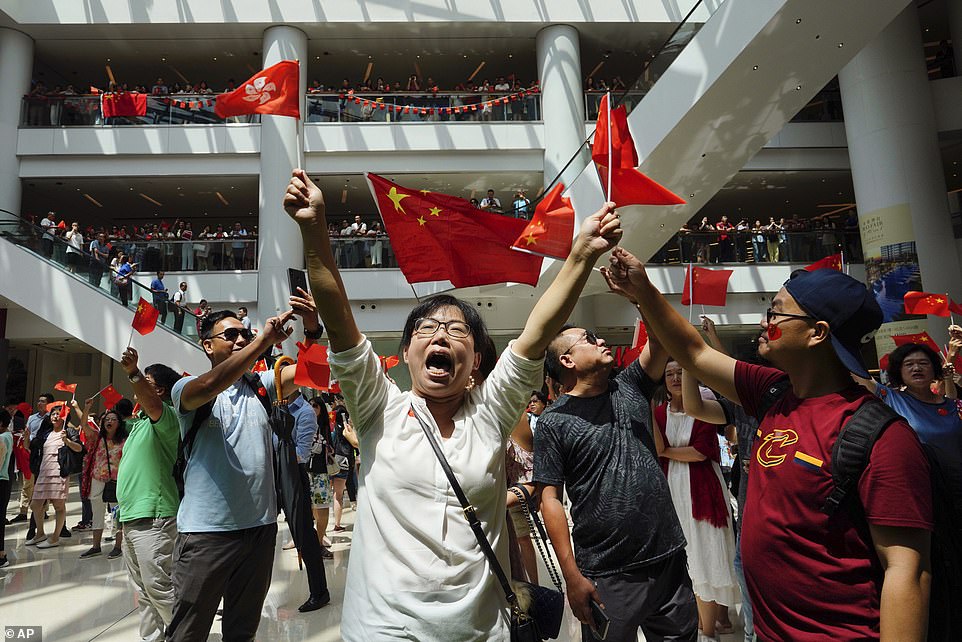 On Thursday night, five people were wounded when a corrosive liquid was thrown from a tower block at pro-democracy protesters who had gathered in the southern district of Ap Lei Chau.

Under a deal signed with Britain ahead of the city’s 1997 handover to China, Hong Kong is allowed to keep its unique freedoms for 50 years.

But democracy activists accuse Beijing of reneging on those promises by ramping up political control over the semi-autonomous territory. 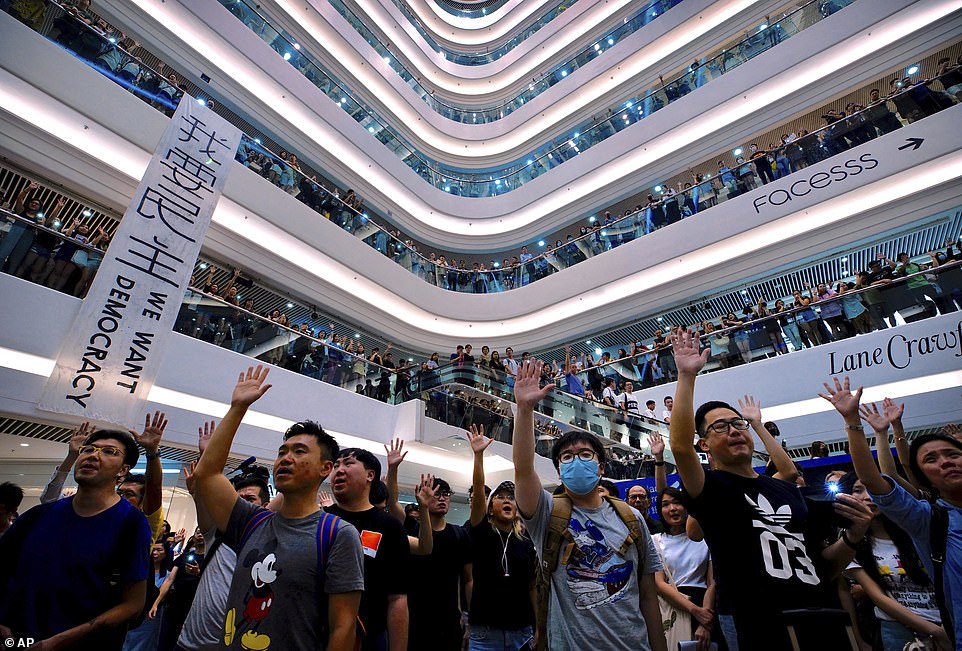 Demonstrators sing a theme song written by protesters during a singing demonstration at the Times Square shopping mall in Hong Kong on Thursday. An anonymously penned protest song, ‘Glory to Hong Kong’, has been adopted as their anthem 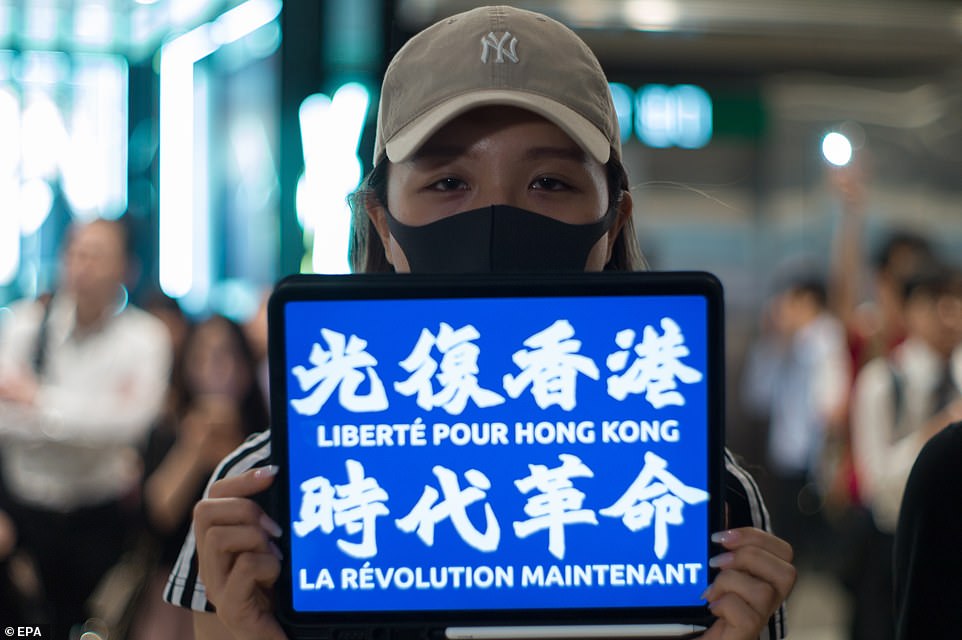 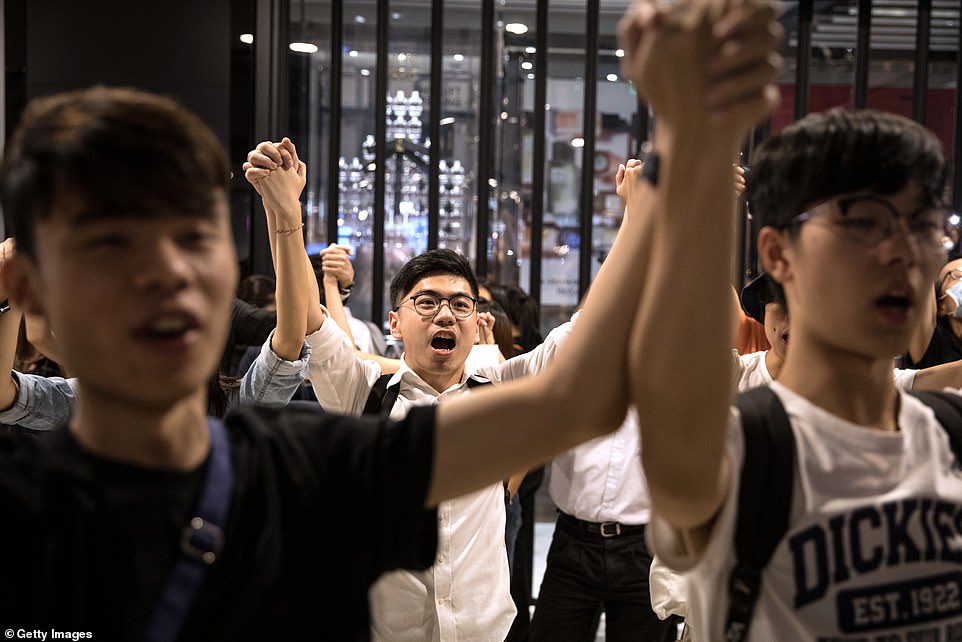 China denies meddling in Hong Kong and has accused the United States, Britain and others of fomenting the unrest

City leader Carrie Lam made the surprise move last week to fully scrap the loathed extradition law – but the gesture was dismissed by protesters as too little, too late.

On Friday evening, in one of the protest movement’s more surreal moments, small groups of demonstrators gathered on a housing estate where Lam was visiting, shouting ‘We want to eat mooncakes’.

Residents told local media Lam had made a brief visit to a nearby elderly home to distribute mooncakes, a dense pastry handed out during the mid-autumn festival.

Activists and analysts say the movement will only end when some of the other key demands are met such as an inquiry into the police, an amnesty for the nearly 1,400 people arrested and universal suffrage.

There is little sign of Beijing ceding to those demands or the protests abating.

Plans by demonstrators to hold rallies on Saturday and Sunday have been rejected by the police.

But previous bans have simply been ignored by the masses and clashes with police have quickly followed.

On Sunday, protesters had planned to march through the city while a separate, smaller demonstration was planned outside the British consulate in a bid to call on London to do more to protect the former colony from Beijing’s tightening grip.

Student groups have also called for a week-long general strike starting on 1 October, when leaders in Beijing will be celebrating the 70th anniversary of the founding of communist China. 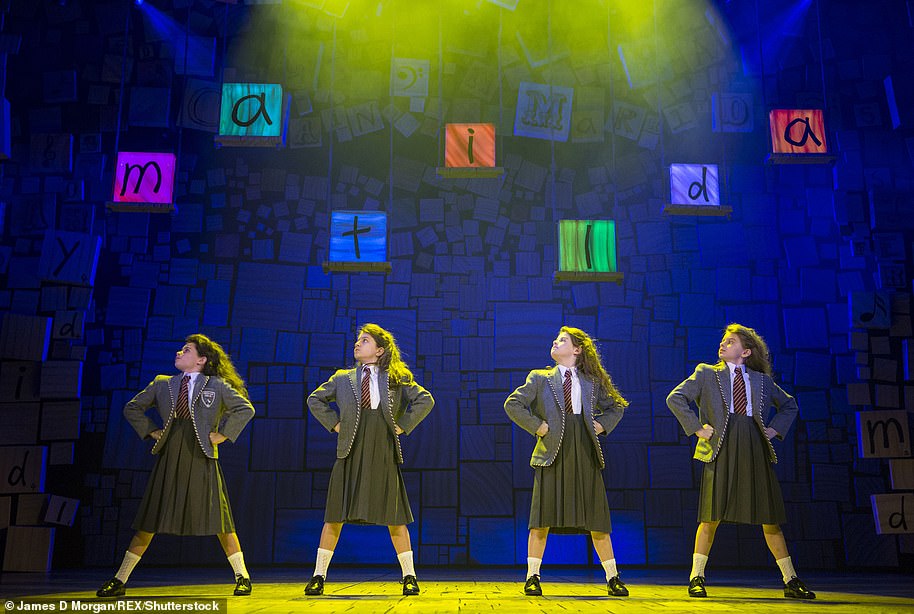 The Hong Hong Tennis Open has been postponed, the WTA has said today.

The event was due to be held between October 5-13 on the outdoor hard courts in Victoria Park, Causeway Bay.

Organisers said: ‘As the winner of the WTA International event of the year award in 2018, we strive to maintain a high standard of the event for all participants, players and the fans in particular.

‘However, after extensive discussions with our key stakeholders, we conclude that a smooth running of the tournament can be better assured at a later time.’

Lunchbox Theatrical Productions also called off a month-long run of the London West End musical ‘Matilda’ at the Hong Kong Academy for Performing Acts that was to open September 20.

‘Sadly the 14 weeks of civil unrest in Hong Kong have decimated ticket sales, and more importantly we cannot guarantee the safety and wellbeing of our international company, which comprises a large number of young children,’ CEO James Cundall said in a statement.

He said he hopes the show can be staged next year.