Jakarta: In nine days time Indonesia's election commission will release the official results of the country's presidential and parliamentary elections.

The so-called "quick counts" of the votes by reputable pollsters which were released in the immediate aftermath of the April 17 poll all showed incumbent President Joko Widodo beat challenger Prabowo Subianto handsomely. The margin predicted varied from 8 to 10 per cent. 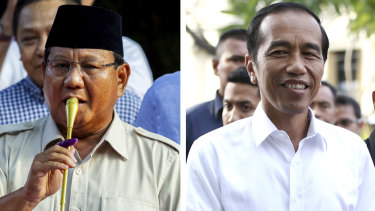 Now the official figures are rolling in. With 78.57 per cent of the vote counted as of Monday morning, Joko enjoys an even bigger lead of 56 to 44 per cent in the presidential count.

That's a landslide of nearly double the six percentage point margin by which Joko beat Prabowo in the 2014 election.

But much like 2014, Prabowo is refusing to accept the result. On election day, he declared victory and claimed he had won 62 per cent of the vote.

From an Australian point of view, it's almost inconceivable to imagine Scott Morrison or Bill Shorten refusing to accept the declaration of official results after this Saturday's poll (to say nothing of having to wait more than a month for the official result).

But that's exactly what is happening in Indonesia right now.

Indonesia has been a democracy for only 21 years, and the people have embraced it with great enthusiasm – the participation rate in the non-compulsory vote on April 17 was a whopping 80 per cent. 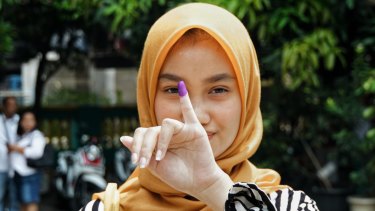 A first time voter from Bekasi, Indonesia, on Wednesday. Indonesians typically dip their finger in paint to signify they’ve casted their vote.Credit:Amilia Rosa

But Prabowo and his campaign team now allege data entry errors at at least 73,100 polling stations. They claim that 6.7 million people didn't get an invitation to vote and that the incumbent has used the apparatus of the state to his advantage. For example, two supporters of Prabowo are facing treason charges for claiming the election result is fradulent.

Small protests have been held, including one outside Bawaslu, the election supervisory body, last Friday. Larger demonstrations loom with calls for "people power" protests coming from supporters of the Prabowo camp (though not from the candidate himself).

A challenge to the election result in the constitutional court is also in the offing, as happened in 2014. But that challenge failed and Prabowo's prospects of success five years later appear once again slim.

In an interview with the Sydney Morning Herald and The Age last Friday, Prabowo's vice presidential running mate Sandiaga Uno – a former deputy governor of Jakarta, and according to Forbes, one of the richest men in Indonesia – confirmed a court challenge remained on the table. 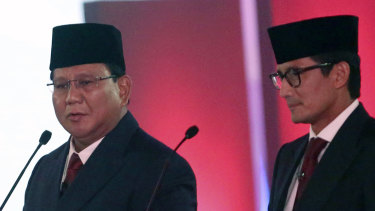 "We have to look at the legal arguments," he said, adding it would be very hard for the opposition to get fair trial and dismissing suggestions that disputing the results could damage Indonesian democracy.

"It will strengthen Indonesian democracy because we are ensuring that at the next election that things like these gross violations of democracy, the use of state apparatus, the misuse of state resources, the abuse of power by law enforcement agencies would not happen again in 2024," he said.

After a strong performance during the 2019 campaign, Sandi is now widely touted as a candidate for president in 2024 – a two-term limit means Joko cannot stand again.

Sandi won't be drawn on that, saying: "I have learned in my short stint in politics not to plan too far ahead". 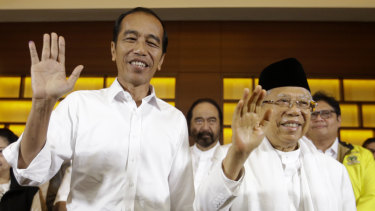 "What is definite, for sure, is that I will continue to be spending my time with the people of Indonesia."

The US-educated, urbane 49-year-old is in a difficult moment. He has to be seen to be supporting Prabowo in this post-election period, particularly if he wants the political support of Prabowo's Gerindra party in 2024.

But Sandi also risks damaging himself politically if he protests the election result too vociferously and aligns himself too closely to Prabowo's flimsy protests.

Far clearer is the future for Prabowo, a 67-year-old former military general who has long nursed a sense that it is his destiny to be president of Indonesia.

On May 22, when the election result is declared – barring a miraculous turnaround in the count – he should finally, gracefully, concede defeat.