Nicosia, Cyprus: The Justice Minister in Cyprus resigned on Thursday amid mounting criticism that police bungled their investigations when some of the seven foreign women and girls slain by a serial killer were initially reported missing.

A Cypriot army captain has admitted to killing the women and girls. Even as the minister resigned, police on Thursday kept searching a lake and a reservoir for the bodies of three of the victims. 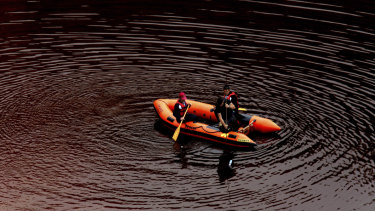 Rescue crews search for suitcases containing the bodies of three women in a toxic mining lake near the village of Mitsero in Cyprus.Credit:AP

The victims, who came to the eastern Mediterranean island to work in low-paid jobs, include three Filipino women and the six-year-old daughter of one of them. Other victims are believed to be a woman from Nepal and a Romanian woman and her eight-year-old daughter.

Critics say Cypriot police did little to investigate the disappearances of the women because they were low-status foreign workers. Some victims were reported as missing almost three years ago.

Police chief Zacharias Chrysostomou is slated to meet with the Cypriot President on Friday amid speculation he may also be on his way out. 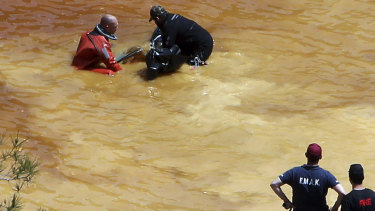 A diver removes a suitcase found in the man-made mining lake on Sunday.Credit:AP

Search crews continued to scour the bottom of a poisonous mining lake west of the capital Nicosia where the suspect – who hasn't been named because he hasn't been formally charged yet – told police that he dumped three of his victims after putting their bodies inside suitcases.

Scotland Yard experts travelled to Cyprus this week to assist in the investigation.

Only one victim, 38-year-old Mary Rose Tiburcio from the Philippines, has been positively identified in the case so far. Her bound body was discovered on April 14 down an abandoned mineshaft. 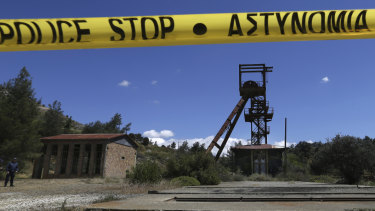 A Cypriot police office stands near the flooded mineshaft where two female bodies were found in April.Credit:AP

The discovery of the body touched off a police investigation that led to the suspect through his exchange of online messages with Tiburcio with whom he had a six-month relationship.

Investigators told a court that during his arrest, the suspect tried but failed to swallow a mobile telephone SIM card.

The suspect initially admitted to only two killings, but days ago admitted to killing seven women – four of them from the Philippines, two from Romania and one who authorities believe to be a Nepalese woman. 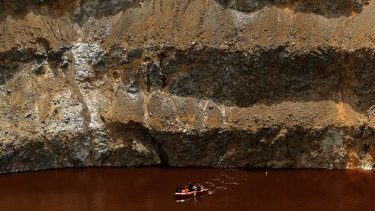 A second body, who police believe is 28-year-old Arian Palanas Lozano, also from the Philippines, was found in the mineshaft six days later after the discovery of Tiburcio.

Authorities are separately searching a reservoir for the body of Tiburcio's six- year-old daughter Sierra.

The body of an adult woman inside a suitcase that was weighed down by a cement block was retrieved from the toxic lake on Sunday. But authorities have had difficulty in locating the other two suitcases using a robotic camera because of the lake water's very poor visibility. 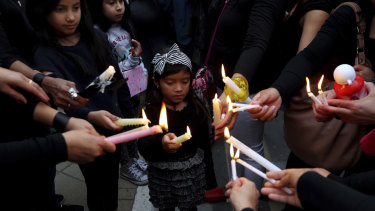 Mourners hold a vigil on Friday outside the presidential palace in Nicosia, Cyprus.Credit:AP

The victims in the lake are believed to be Maricar Valtez Arquiola, 31, from the Philippines; Florentina Bunea, 36, from Romania; and Bunea's eight-year-old daughter, Elena Natalia.

Arquiola has been missing since December 2017 while the Romanian mother and daughter vanished in September 2016.

Justice Minister Ionas Nicolaou said he was stepping down as a matter of "conscience and principle" because the killings that authorities have described as unprecedented have deeply shaken the island nation of just over a million people. 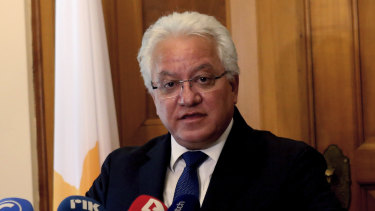 But Nicolaou said it was "completely unfair" to blame either himself or the government for any investigative lapses in police handling of the missing persons' reports because a minister "doesn't get involved nor should he get involved" in those investigations. He said law enforcement authorities never informed him of such reports.

Cypriot President Nicos Anastasiades said he would meet on Friday with diplomats from countries with a large number domestic workers living in Cyprus to express his sorrow for the victims and to apologise on behalf of the nation for "failures in the handling of these cases".

He will also brief the diplomats on measures the government will take to improve how police handle complaints by foreign workers.

Anastasiades said he accepted Nicolaou's resignation with "deep regret". He repeated that he shares the public's shock and revulsion over the killings and that the government is determined to solve "these abhorrent murders".

An independent probe will be launched into the police handling of the case. Police spokesman Andreas Angelides said the police chief has ordered a second, separate investigation into the disappearances of three of the victims who vanished in September 2016 and December 2017.

Angelides said both probes aim to uncover whether police followed proper procedures or whether mistakes were made that constitute "either disciplinary or criminal acts". Their findings will be forwarded to the Attorney-General.