Someone has tried to behead a statue in Melbourne of Mahatma Gandhi, a global symbol of peace and harmony, in an act of vandalism Prime Minister Scott Morrison said was disgraceful.

Mr Morrison, who unveiled the statue at the Australian Indian Community Centre in Rowville on Friday, said attacks on cultural monuments would not be tolerated in a country he called the most successful multicultural and immigration nation in the world. 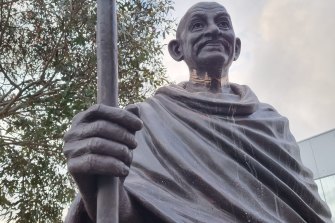 A vandal attempted to decaptiate a statue of Gandhi in Rowville.Credit:Australian Indian Community Charitable Trust./Facebook

“It is disgraceful and extremely disappointing to see this level of disrespect,” Mr Morrison said in a statement on Sunday.

“Whoever is responsible for this has shown great disrespect to the Australian Indian community and should be ashamed.”

Melbourne’s Indian community leaders, in the spirit of the political leader’s philosophy, said the person behind the desecration needed help.

Australia India Community Charitable Trust chair Vasan Srinivasan said he did not believe the vandalism was motivated by racism. 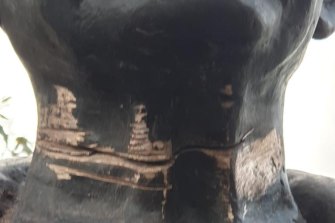 Police believe power tools were used to try and behead the statue.

“He [Mahmat Gandhi] is a world-renowned leader and accepted by everyone through the world…I never ever dreamt this thing would happen,” Mr Srinivasan said.

“Of course it is not appropriate for someone to do this, but we can fix the Gandhi statue. He [The person behind it] needs some support to make sure he gets well.”

Mr Morrison unveiled the statue on Friday afternoon alongside Federal Education Minister and local member Alan Tudge, Victoria Opposition Leader Matthew Guy and consulate general of India Raj Kumar as part of a celebration of India’s history and 75 years since the country’s independence.

Victoria Police said an unknown number of offenders used a power tool to damage the life-sized solid bronze statue on Kingsley Close sometime between 5.30pm on Friday and 5.30pm on Saturday. 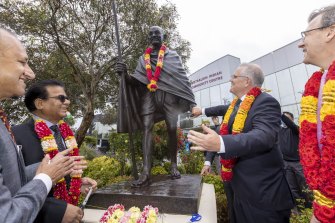 Federation of Indian Associations of Victoria president Sury Soni said the incident was a shock because of what Gandhi symbolises.

“He is an icon of peace and unity,” Mr Soni said.

“We wouldn’t expect such odd behaviour from anyone in the Victorian community, so this has come as a surprise.”

Any witnesses or anyone with CCTV or dash cam footage of suspicious behaviour can contact Crime Stoppers on 1800 333 000 or submit a confidential report online.