‘There’s never been a better time to come to the UK’: Travel experts predict plunging Pound will spark boom in foreign visitors – as firm in Singapore sees 30 per cent increase in enquiries about trips to UK

The plunging Pound has prompted travel experts to predict a domestic tourism boom in the UK, providing a much needed boost to restaurants, shops and visitor attractions.

Sterling fell back to $1.06 this morning after recovering to $1.08 yesterday. It has also weakened against the Euro, leading to higher costs for Brits visiting the Continent, but less dramatically so.

Exchange rates are volatile so the outlook may change significantly in the coming months.

As a result, travel experts have predicted an influx of US tourists visiting the UK this winter in a bid to take advantage of the weakened pound.

Independent travel expert Rob Staines predicted British holidaymakers already facing a squeeze on their household finances would be likely to put off booking trips abroad, but the overall effect could end up being positive for the UK economy.

But he told MailOnline: ‘The UK has always been a popular choice for US travellers and the weak pound will encourage even more visitors at a time when the country desperately needs it. 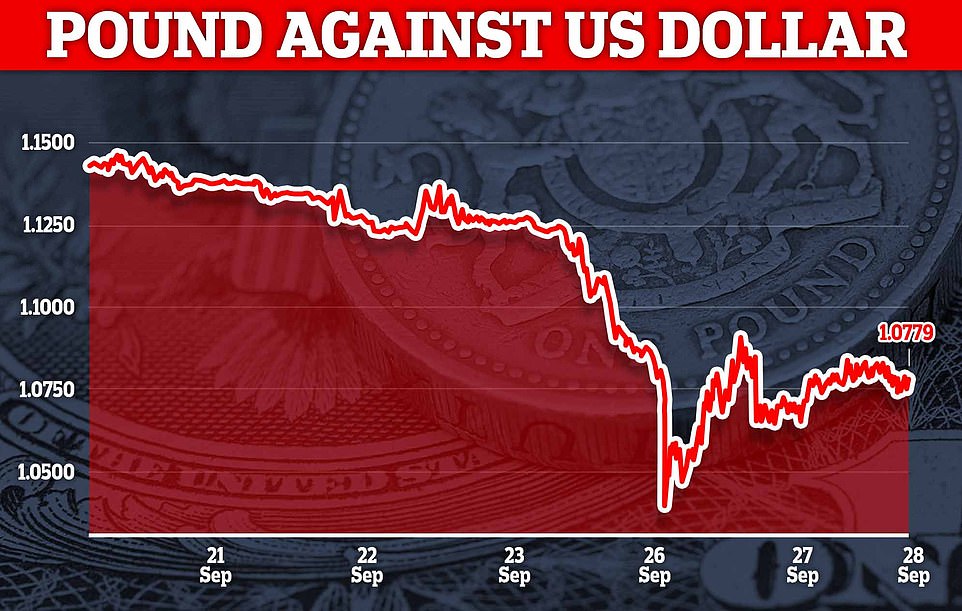 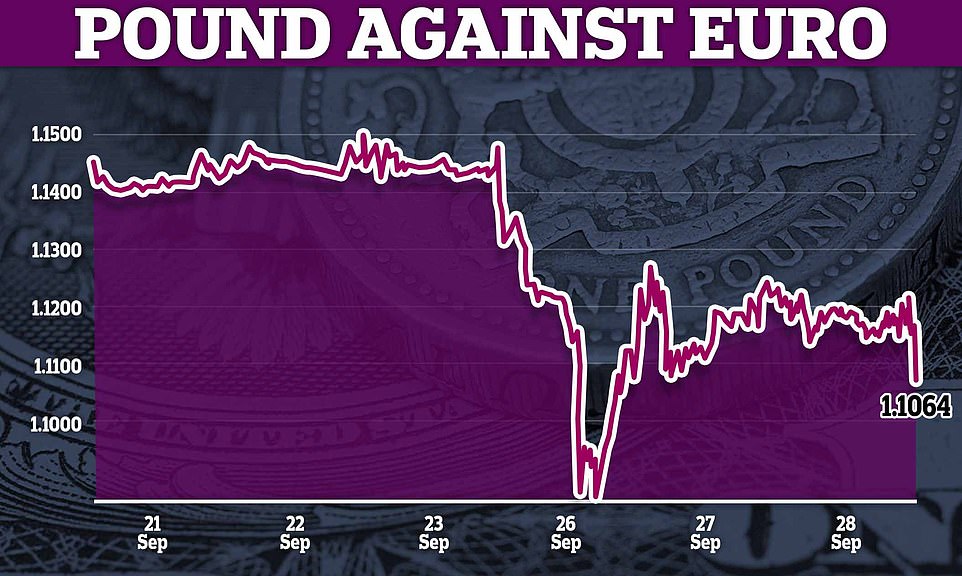 ‘The British tourism sector has been decimated by the pandemic and has not recovered at the pace hoped for, especially in London where attractions are not seeing numbers anywhere near pre-pandemic levels and many hotels are struggling to fill rooms.’

Paul Charles, of the PC Agency, added: ‘The good news is those coming into the UK will find great bargains and great prices. Not only in hotels, not only on their airfare, but also at restaurants and attractions.

‘There’s never been a better time and a better value time to come into the UK.’

The plunging pound is already proving a draw for Asian holidaymakers. EU Holidays, a travel agency in Singapore, has seen a 30 per cent increase in enquiries about trips to Britain since September 10.

To illustrate the impact of the currency fluctuations, MailOnline calculated the possible costs faced by a British couple on holiday in New York compared to their counterparts in London.

Using approximate prices for a range of typical tourist activities – and assuming constant prices – the cost of each activity was then converted into their home currency based on the exchange rate this morning (one Pound to 1.06 Dollars) versus April 1 (one Pound to 1.31 Dollars). 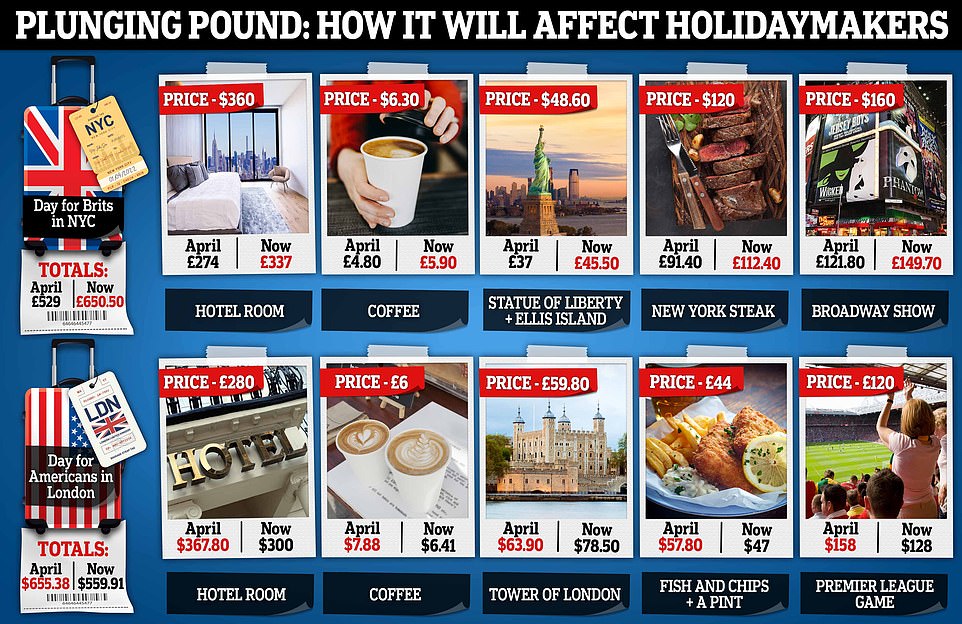 To illustrate the impact of the currency fluctuations, MailOnline calculated the possible costs faced by a British couple on holiday in New York compared to their counterparts in London. Using approximate prices for a range of typical tourist activities – and assuming constant prices – the cost of each activity was then converted into their home currency based on the exchange rate this morning versus April 1

The plunging pound may be bad news for Brits travelling abroad, but for Asian holidaymakers it’s already proving a major draw.

EU Holidays, a travel agency in Singapore, has seen a 30 per cent increase in enquiries about trips to Britain since September 10.

‘Singaporeans will also enjoy cheaper goods imported from the UK or see it as an opportunity to send their children there to study,’ marketing manager Mandy Chen told the Straits Times.

One Pound was equal to 1.55 Singaporean Dollars as of this morning, compared to S$1.63 at the end of August.

Mohamed Rafeeq, owner of Clifford Gems and Money Exchange at Singapore’s Raffles City shopping centre, said: ‘It’s the best time for people to go on holiday to the UK because this is the cheapest rate ever – I’ve never seen the rate so low before.’

But he warned the rate was ‘not here to stay’, adding: ‘The current rate and drop is very volatile… I’ll give it two to three days for it to bounce back to its usual rate.’

The British couple were left paying more than £120 more for a day that included a trip to the Statue of Liberty and Ellis Island, a steak meal and a Broadway show.

Meanwhile, the Americans in London saved $95 on a day that featured a visit to the Tower of London, fish and chips and a Premier League football game. Both scenarios included accommodation.

Despite concers, Mr Charles said there had been ‘no sign’ of currency fluctuations leading to Brits changing their holiday plans.

‘They are still booking in their droves to travel overseas and booking flights both long-haul and short-haul for 2023,’ he told MailOnline.

‘There is still a major desire among British holidaymakers to see friends and family that they haven’t seen for years due to Covid and there’s no sign of that changing.’

Mr Staines said British holidaymakers already facing a squeeze on their household finances would be likely to put off booking trips abroad, but the overall effect could end up being positive for the UK economy.

‘It’s likely we will see a rise in the amount of people who cannot afford a holiday for the first time in their lives which is even more contentious following years of inability to travel due to the pandemic,’ he told MailOnline.

The currency had clawed back ground after reaching an all-time low of just $1.03 on Monday, but fell again this morning after the IMF criticised the ‘large and untargeted’ fiscal package.

There was fury at the international body urging Mr Kwarteng to perform a U-turn on his tax cuts in his next mini-Budget on November 23.

Mr Kwarteng tried to soothe nerves on the Conservative benches in a call with dozens of MPs last night, stressing the need for ‘cool heads’ and saying the government ‘can see this through’.

Fears are growing that the currency will be at parity with the greenback unless the UK Government can arrest the slide. The dollar has been extremely strong worldwide, but the Pound has struggled even against that backdrop.

By Ryan Hooper for the Daily Mail

The cost of escaping Britain for sunnier climes this October half-term has soared, with some flights to hotspots now hundreds of pounds more than pre-pandemic levels, according to a study.

Some one-way flights are now more than three times their price in 2019, according to analysis of the six busiest airports in England and the six most popular holiday destinations by the Which? consumer champion.

They found flights from Birmingham, Gatwick, Heathrow, Luton, Manchester and Stansted to Alicante, Antalya, Dubai, Dublin, Malaga and Tenerife were on average 42 per cent more expensive than three years ago – up from £150 to £212.

Their findings were based on data by industry firm Skytra, who looked at the price of one-way journeys between the domestic and foreign airports, booked with six months, three months and six weeks to go respectively before the start of the autumn break. 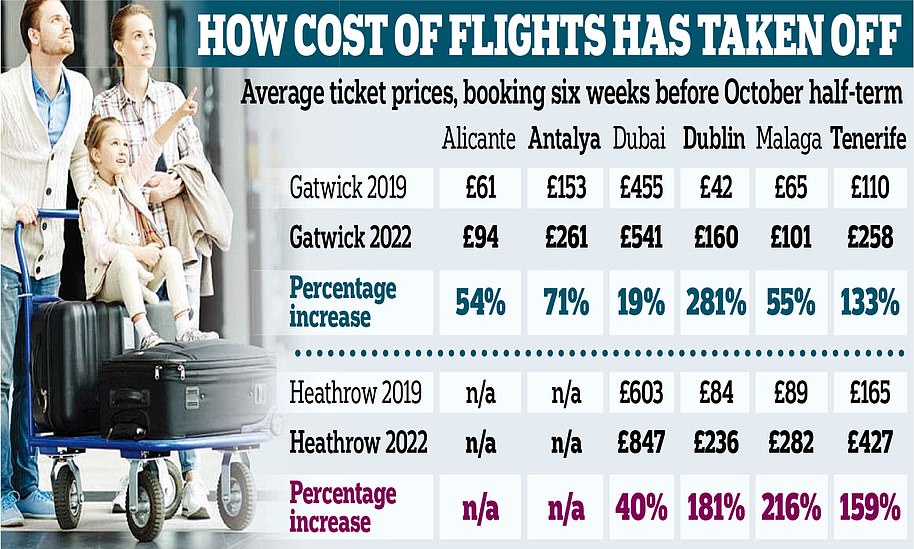 For example, the cost of a one-way flight from Gatwick to Dublin, booked six weeks before the October half-term, increased by around 280 per cent – up from £42 three years ago to £160 now.

A flight from Manchester to Dublin increased by more than 230 per cent, from £45 to £149. Skytra chief executive Elise Weber said rising fuel costs, pent-up demand for travel emerging from the pandemic and airport passenger caps are all contributing to higher fares.

Guy Hobbs, Editor of Which? Travel, said: ‘Travellers have had a torrid time this year and our analysis shows they’re paying through the nose for their trouble. With fares so high, it’s even more important that airports and airlines are held to account for the unacceptable disruption travellers have faced. The Government should give the Civil Aviation Authority stronger powers so it can hit operators with heavy fines when they flout the rules.’

The most expensive flight analysed was from Heathrow to Dubai, booked six weeks before half-term, and costing £847. The same flight in 2019 cost £603.

And a flight from Heathrow to Dublin, booked with six weeks to go before the October break, cost £236 this September, up from £84 the same time three years ago. However, a tiny handful of journeys actually went down in price.

This included the cost of a one-way flight from Luton to Dublin, booked with six weeks to go before half-term – down from £27 pre-pandemic to £17 this year.

‘The unprecedented surge in passenger demand this summer, coupled with staffing shortages across the travel sector in Europe and the US, has inevitably pushed up prices – and that’s even before considering the higher fuel costs and rising inflation.

‘Therefore, the best thing we can do to help relieve that pressure for passengers is get teams across the sector fully resourced, and we’re supporting our airline partners and ground handlers working at Heathrow to do this as quickly as possible.’

Passengers at major airports including Heathrow, Manchester and Gatwick experienced major disruption during the summer, with long queues at security and baggage reclaim, as well as last-minute cancellations.

Airline firms had been forced to axe thousands of workers in the gap between the end of the Government’s furlough scheme and the end of Covid travel restrictions.

MPs were told this summer that firms were facing competition from labour markets and other industries to attract staff back to airlines.